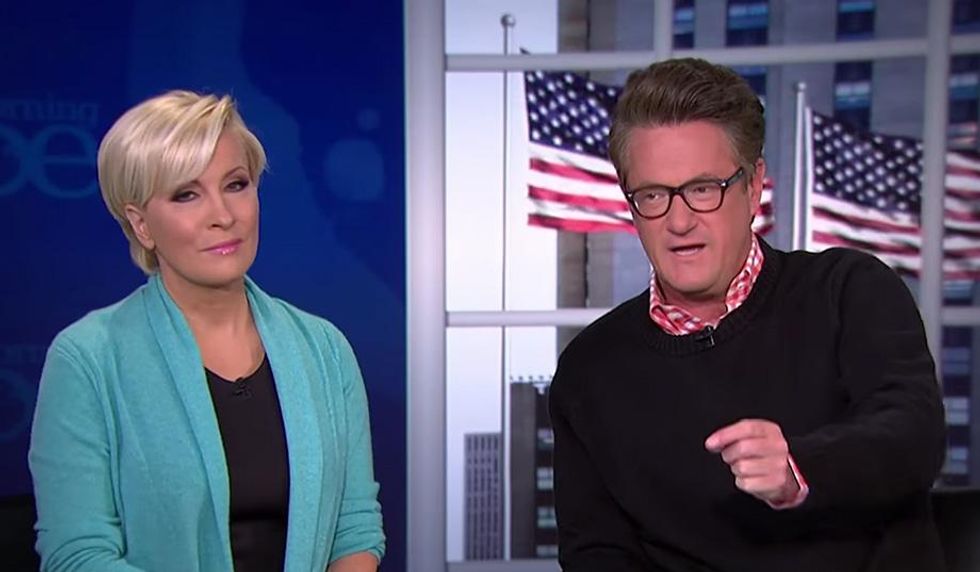 This morning, on Morning Joe, during a discussion on all the allegations of sexual assault, harassment and "impropriety" coming out in recent months, Mika Brzezinski launched into a monologue in which she suggested that the women who say they were harrassed by Mark Halperin -- a former frequent guest of the show -- were hypocrites for not wanting to meet with him and hear his apology.

We also have -- some men who are willing to face the music, who are willing to face the facts, who are willing to admit to their actions 10, 20 years ago, even five years ago. Mark Halperin is more than willing to meet with his accusers and apologize with them face-to-face. I've actually tried to offer him to them. They don't want to talk to him. They don't want to talk to him. There are some -- there are some hypocrisies here. When things happen and men actually want to validate that truth, that's important that we actually allow that, if we want to grow as a society and learn from each other. If we just want to strike people down for political motivation or for anger, we're not going to get anywhere. And I know I said something incredibly -- what's the word -- explosive.[...]

But I have been poring through these cases, they're all different. They all involve people, they all involve people who have had terrible experiences in some cases, and some of them involve men who have sought counseling and who want to apologize, who may not ever come back to their careers in full form. But the question is, should they be allowed to apologize? Should they show that they know that things have changed, that perhaps maybe they want to actually come forward and talk about this? I'm not sure what we're doing here, I really don't know. And what happened with Al Franken doesn't feel right. It feels political.

I'm going to give Mika the benefit of the doubt here and assume that she has simply never been sexually harassed or assaulted before. Because if she had, she might have considered -- just for a moment -- what a deeply unpleasant and uncomfortable situation that would be for someone who was. How it wouldn't really be something that would benefit them, so much as it would benefit Mark Halperin and those who wish to continue their relationships to Mark Halperin without looking like total garbage monsters.

Before I came out publicly with the story of the professor who groped me and smashed my head into a brick wall when he was disappointed I did not go home with him, there were several women who -- like Mika -- were friends with him and offered to facilitate meetings between the two of us so that he could formally apologize to me. You know, so I could get some closure. It was for me, for my benefit. Clearly.

Similarly, these women do not owe Mark Halperin shit.

It is not the responsibility of those who have been victimized to make themselves uncomfortable for the benefit of those who victimized them. It is not their job to facilitate that person's redemption arc. It is not their job to make Mika Brzezinski feel less awkward about wanting to continue to be friends or professional acquaintances with them. They have been through enough already. They already did their part. They owe them nothing.

How does Mika imagine this would go? Were these women supposed to sit down and have some tea with Mark Halperin while he said, "Gee, I am real sorry that I grabbed your breasts/put my penis on your shoulder without your permission. I now see that 'things have changed' and that people find this to be an inappropriate thing to do now. But it was 2004, back then! How could I have possibly known?" Were the women then supposed to go, "Oh, thank you so much for your sincere apology, Mark Halperin, please do go on with your career!"?

For the record, Halperin has denied that either of these things happened, and that he merely pursued relationships with women he worked with.

Mika asked "Should they be allowed to apologize?" Well, yes. Certainly. In fact, they should absolutely apologize. That, however, does not mean that anyone has to forgive them and consider the matter settled. That is up to the victim, not up to Mika Brzezinski. Additionally, even if the victims do accept his apology, that doesn't mean that anyone else has to. It doesn't mean everyone has to consider him cleansed of all sin and give him his career back. He does not get to say 10 Hail Marys and an Our Father and go on about his life.

This is simply the risk one takes when one puts his penis on someone's shoulder without their permission. Which, I should mention, was just as much of a creepy thing to do in 2004 as it is to do now. It is also not a thing anyone should have to go to "counseling" to figure out how not to do.

In fact, I would go as far as to suggest that any adult man who is so stupid as to go decades of his life completely unaware of the fact that groping women without their permission is not an acceptable thing to do is an adult man who is far too stupid to have any kind of important career. That is an adult man who should not have passed kindergarten, the grade in which we all learn to keep our hands to ourselves.

Mark Halperin has an estimated net worth of 29 million dollars. He is not going to jail, and he is not literally being dragged into a giant wicker man and set aflame by a mob of angry women. I'd say he's doing OK. There are women out there, lots of them, who have actually lost their careers as a result of being sexually harassed or assaulted -- many of whom do not have 29 million dollars. I'm going to save my empathy for them.

None of this is about getting apologies from the men accused of these things. This is not a movement of angry fishwives yelling at men for having left the toilet seat up. This is about setting a new precedent in which there are consequences for this behavior. The reason all of this was going on for so long is because men like Halperin and others had literally no reason to think they weren't going to get away with it. They had no reason to consider that there could be consequences to their career or otherwise. Now they have to consider that. Now they have to think, "Golly, I sure would love to grab my employee's breasts -- but if I do, she could have the power to completely torch my career that I've worked so long and so hard for. Maybe I should refrain from doing that!"

I'm sorry, but no. Fuck these men and their careers. Fuck their redemption arcs. Fuck sitting around a campfire and talking about our feelings while holding a talking stick or whatever. That's not how we're going to "learn and grow" as a society. We will "learn and grow" as a society by men understanding that they don't just get to put their penises wherever they want just because they're a real powerful man with a really cool and important career.