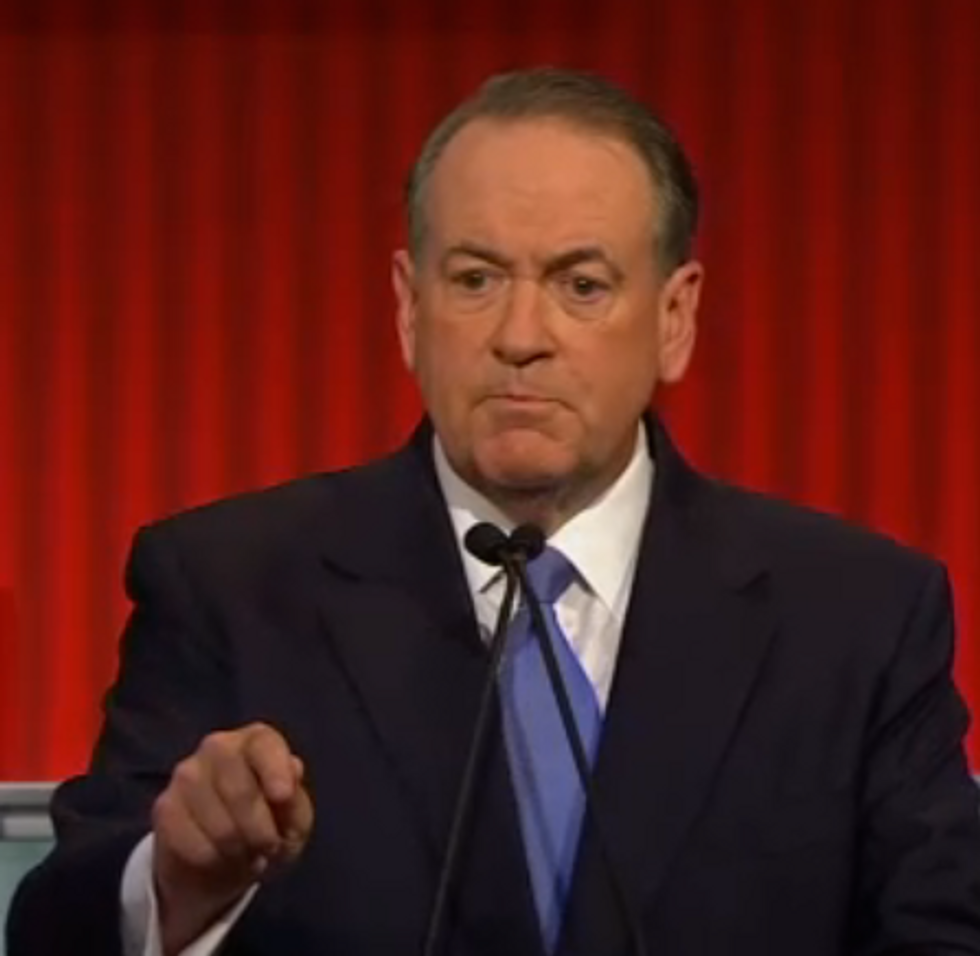 Putrid squirrel schlong Mike Huckabee is sick and tired of being cock-teased and blue-balled by the strip club that is Washington DC, and he is not gonna take it anymore. Instead, he's going to burn it down.

Washington: It's a strip club. The political class dances for the donor class. And the working class get stuck with the tab.

Americans are tired of it. They're tired of corrupt Washington elites.

Let's burn down the Washington political machine and rebuild this country.

No more leading from behind. No more losing. It's time for America to win again.

That's Huckabee's latest web ad, it is called "Strip Club," and you can find it at dubya dubya dubya MikeHuckabee dot com slash BurnItDown. So he's not being metaphorical or allegorical or poetical; he's damn serious about setting the nation's capital on fire because his shriveled nuts are sorer than the fried roadkill he ate for dinner last night, and he's gonna assplode all over this country if Uncle Sam doesn't start wriggling its G-string on his bulge, for a change.

In case Huck's subtlety is just too nuanced for your little brain to grasp, here is a shot from his ad of some stubby fingers lighting a match to BURN IT DOWN.

Get it now? Elect Mike Huckabee president, to "transform Washington and transfer power back to the people," or he will set the District of Columbia on fire, and then free lap dances for everyone! It's either that, or he burns down the entire U.S. of America, for the children:

I refuse to walk my grandkids through the charred remains of a once great country.

Instead of burning this country to the ground, let's burn down the corrupt Washington political machine and rebuild America before it's too late.

Great options, huh? Also, and we might be wrong about this, but we kind of don't think so, if you burn down a strip club, you don't get to rebuild America from the White House; you just go to prison for arson. Oh, but maybe that saucy Kentucky clerk Kim Davis will volunteer to go to the pokey in Huck's place! Seems like the right and Christian thing for her to do, after he's been such a big supporter of her law-breaking. But maybe that's just because he's angling to be the fifth Mr. Kim Davis, in case things don't work out with ol' Joe and his overalls.

We know that Huck is sick and tired, not only of having to tug on his own dick, but also of democracy. That's why he's been openly encouraging elected government workers who've sworn an oath to uphold the Constitution to violate their oath and refuse to enforce laws they don't like. That's not exactly how America is supposed to work, but then, Huckabee's understanding of the country he's now threatening to burn to the ground is just about as good as his understanding of strip clubs.

On a completely unrelated not -- OR IS IT? -- authorities are investigating a "suspicious" middle-of-the-night fire at a Planned Parenthood clinic in Thousand Oaks, California. Given Huckabee's vow to use military force to shut down all abortion clinics, maybe he's already started burning the mother down.

"Blow me or the stripper gets it" might make for an enticing ad, but it's not a very good way to get freebies in the champagne room, and it sure as hell isn't a good way to persuade voters that you're fit for the office of the presidency. And while Huckabee boasts that he "repeatedly defeated the Clinton machine," we'd like point out that Bill Clinton didn't need to threaten to burn DC or America to the ground to get his hummer. Just sayin'.