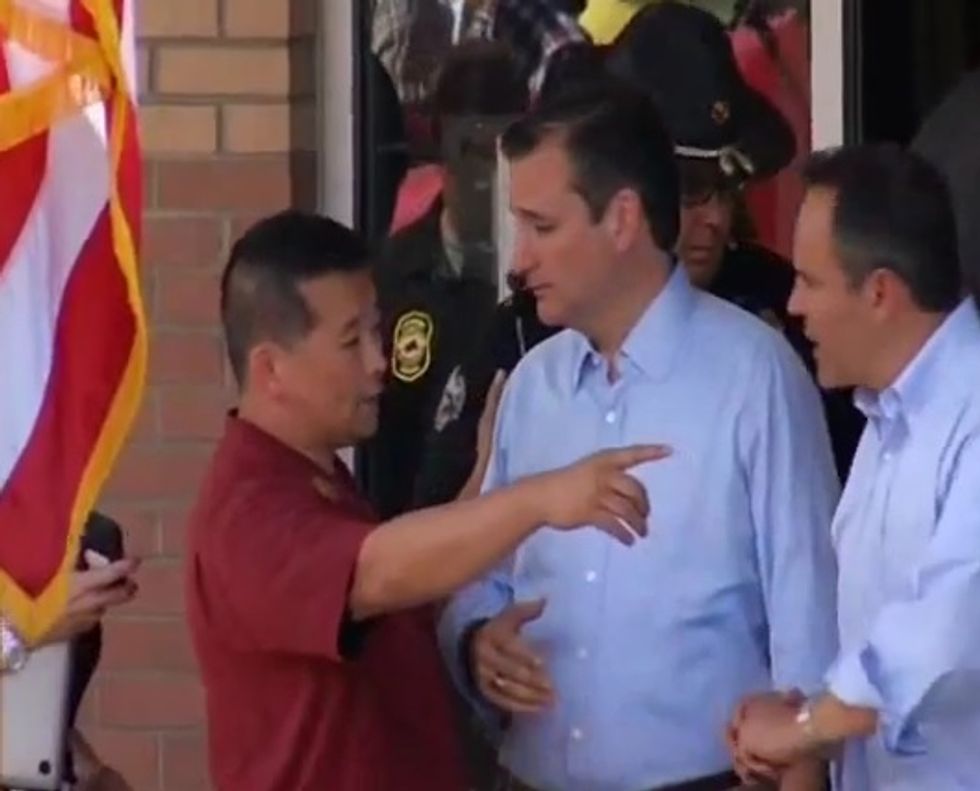 Senator, Jesus wants you to sit over there, away from the microphones

Mike Huckabee would just like you all to know that if anyone's going to go to jail in Kim Davis's place, it's Mike Huckabee, not that Canadian-come-lately Ted Cruz. Following the hilarious scene Tuesday of a Huckabee staffer blocking Cruz from getting anywhere near the main stage of the Kim Davis Is Free rally, Huck is now complaining that Cruz was trying to step all over Team Huckabee's carefully-staged sincere demonstration of Christian faith.

The Cruz humiliation started shortly before Davis was released from jail, as the Senator from Alberta was shunted away not only from the main stage, but from a scrum of reporters near the door of the jail, as described by the New York Times:

When Mr. Cruz, who met with Ms. Davis, exited the Carter County Detention Center, a throng of journalists beckoned him toward their microphones, but an aide to Mr. Huckabee blocked the path of the senator, who appeared incredulous [...]

Mr. Huckabee, a former Baptist pastor, cast the dispute as a matter of religious freedom threatened by overreaching courts, while Mr. Cruz stood to the side, keeping an unusually low profile.

The video is fun, too. And you can watch it without fear, since you can't hear a word Cruz says, just his unbelieving glare as the Huckabee staffer points him off to the peanut gallery.

That aide has some real cojones, getting all up in Ted's faith like that.

On Fox News Wednesday, Huckabee explained that it was his God Hates Fags party, and that Ted Cruz should be happy he was even allowed to tag along for some Religious Liberty sloppy seconds:

"The program of course, was already settled," Huckabee went on, adding that he was happy that Cruz "was able to come and show his support for her, even if it was at the last minute."

"We planned, paid for, and promoted the event and Sen. Cruz showed up the day of and tried to take it over. It would have been the equivalent to us showing up at their religious liberty event in Iowa a couple weeks ago, claiming it was our event, and expecting to give the keynote speaking role," said a Huckabee aide, who refused to talk on the record about the event. "First time any of us have ever seen a presidential candidate crash another candidate's event without so much as reaching out to get permission to attend. Bizarre."

Frankly, that open admission that the event was more about Mike Huckabee than Kim Davis was sort of refreshing; we're sure the unidentified staffer has already been reprimanded for going off script. Surely they must have also said at some point, "Oh, yes, and Jesus wanted this to happen, for America," but Politico forgot to quote that part.

After all, it would really be cynical to say that this was all about Huck (as the aide actually said), when Huck was so busy insisting that God literally manifested Himself in the person of Kim Davis, to put an end to tyranny. Or as he put so memorably at the rally, quoting noted theologian Forrest Gump: "God showed up and he showed up in the form of an elected Democrat named Kim Davis" to undo the Supreme Court's error:

This was a considerably less bloody outcome than during the rectification of the Vuldrini, when Kim Davis came as a large and moving Torg. Many Shuvs and Zuuls knew what it was to be roasted in the depths of the Slor that day, we can tell you!