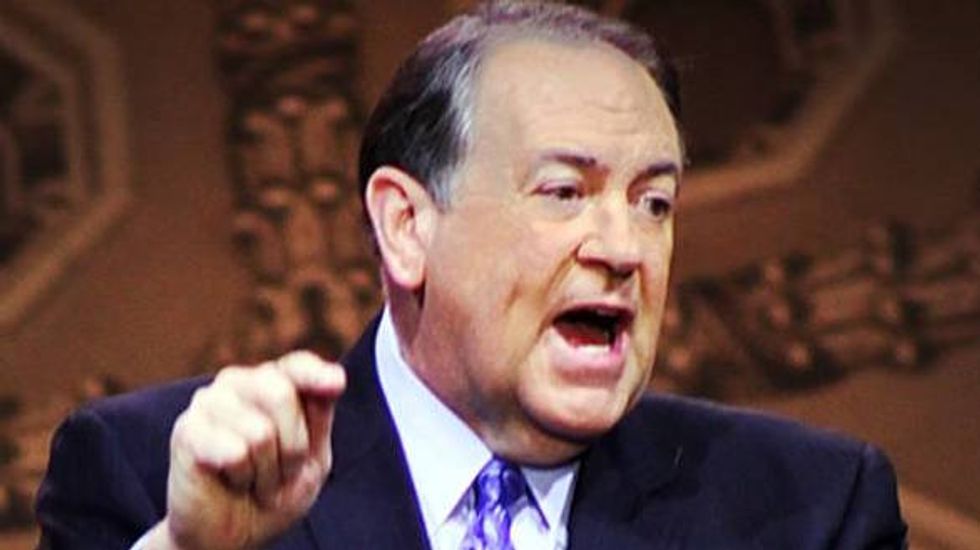 If anyone knows Catholicism, it's Mike Huckabee the Baptist preacher

Like many rightwingers who have felt the need to turn Pope Francis's U.S. visit to into a campaign talking point, Mike Huckabee is really offended on behalf of Pope Francis, because Barack Obama went and invited some LGBT guests as well as climate change activists to the White House to hear Francis speak. We have the cable teevee on right now and there are no reports of the Pope stalking out of the White House, asking for a divano per svenimenti, or smooshing a graprefruit into Obama's face, so it appears that Huckabee's concerns may have been a little overstated. Even so, just to be on the safe side, Huckabee took the time Tuesday to at least rhetorically expel Barack Obama forever from the Christian faith, which is apparently a power that Baptist ministers have over members of the United Church of Christ. .

In an interview Tuesday, Huckabee told Newsmax "TV" host Ed Berliner how sad he was for the Pope's mistreatment by Obama, who is clearly only pretending to be a Christian:

"I'm also concerned about a guy that believes he's a Christian and pretends to be and then says he is but does things that makes it very difficult for people to practice their Christian faith," Huckabee said, inferencing President Barack Obama. "I'm disappointed if a person who says, 'I'm a Christian,' but you invite the pope into your home and then you invite a whole bunch of people who are at odds with the Catholic Church policy.

"There's something very unseemly about that.

Call us a Usage Fundamentalist, but we're pretty sure "inference" wasn't a verb, at least not when we went to bed last night. We suppose we could also point out that Francis has already met, by choice, with married gay people and also with a transgender fellow and his fiancee, and that he didn't even seem to come away from the encounters with any deep psychic or theological scars.

Even so, Berliner agreed that it was awfully worrisome that Obama had insulted the Pope that way, adding, "And it seems that the Vatican itself is very concerned about who the president has invited to meet the pope." Berliner appears to be inferencing (nope, that's definitely not right) a report in which an unnamed "senior Vatican official" fretted that possible photos of the Pope with a few gay people would be seen as an endorsement of their sinning. We have yet to hear that Pope Francis himself chastised the President for this alleged gaffe, but it could be that he's just smiling and pretending not to be as deeply hurt as Mike Huckabee is certain he must be.

White House press secretary Josh Earnest told reporters last week that in addition to the three or four activists that conservatives have griped about, "There will be 15,000 other people there too," which just goes to show how little the President cares about the Pope's delicate feelings. There's also no indication at all that the White House made any effort at all to question whether attendees had been divorced and remarried, used birth control (like Bad Catholic Chris Christie), or even whether they had attended Mass on Holy Days of Obligation.

In the days leading up to the Pope's visit, Huckabee has taken Obama's imagined slights to the Papacy very personally (even though many of Huck's more fervent fundamentalist brethren regard as the Whore of Babylon, as we all know from Chick Tracts); he had derided the White House guest list for the papal visit as "a politicized cattle call for gay and pro-abortion activists" and asked,

Why is it that Obama goes to extremes to accommodate Muslim terrorists but shows nothing but disdain for Christians? ... This is a new low for an administration that will go down as the most anti-Christian in American history.

The Pope, for some reason, has not seen fit to arrange a meeting with Mike Huckabee so that the good reverend from Arkansas could set the Pontiff straight on just how badly he was being treated by the president.