Mike Huckabee Kicks Off His Maybe-Campaign With Some Prison Rape Jokes, For Jesus 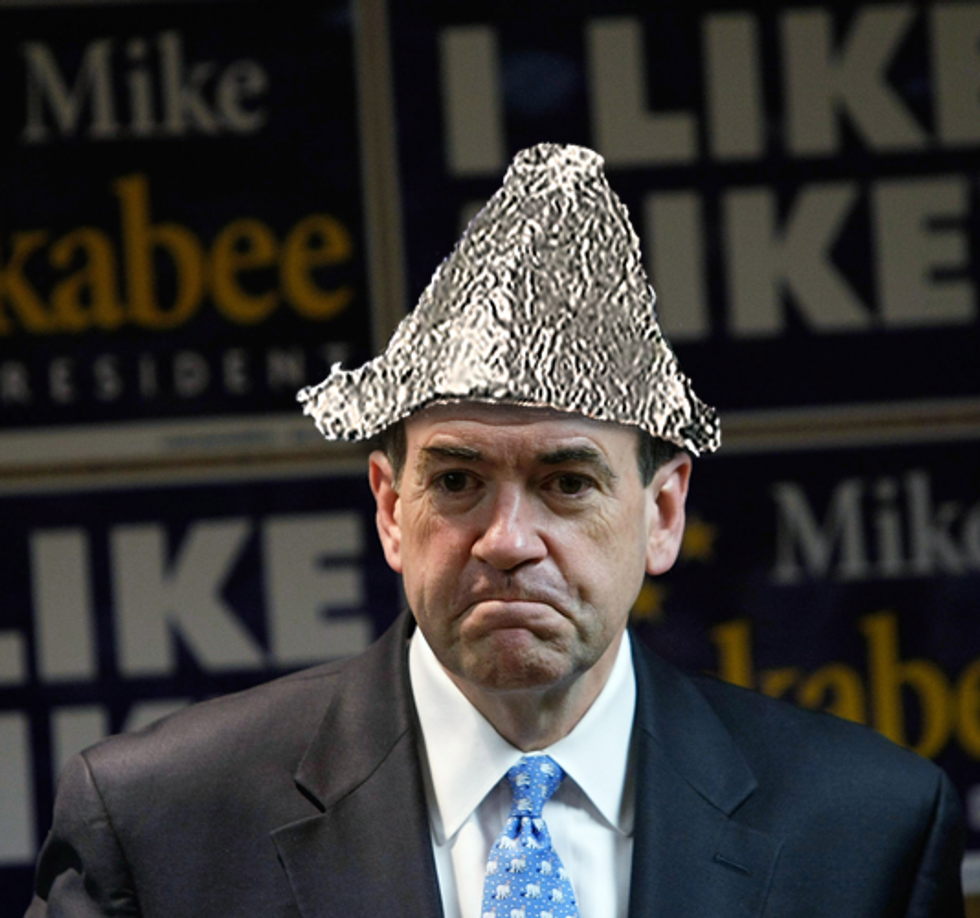 Since the GOP is so good on the issue of rape, Gov. Mike Huckabee (R-Guitar Hero) decided to make a chapter of his new book dedicated to a rape joke. And some namby-pamby liberals decided to get all butt-hurt over it, because not everyone thinks that rape is the next funniest thing to “concentration camps are a great diet” jokes!

The title of Chapter 10 of Huckabee’s book, God, Guns, Grits and Gravy, is (and we are not kidding): “Bend Over and Take It Like A Prisoner!”

Because nothing says Serious Presidential Material like a good prison ass-rape joke, amirite? We have not read his book because we respect our eyes and brains too much, but the good people at US News tell us that he was writing about airport screenings. We guess the title of the chapter comes from this line:

"After years of this indignity, much of the flying public thinks little of it, and they usually don't complain. They just dutifully stand there, bend over, and take it like a prisoner."

When he is not daydreaming about getting bent over by Gov. Bob McDonnell, Huckabee is off quitting his Fox News show so he can pray to his Skygod about whether or not he should lose the 2016 GOP nomination to Rick Santorum:

Huckabee used Saturday night's taping of "Huckabee" to announce his departure from the network.

"As much as I have loved doing the show, I cannot bring myself to rule out another Presidential run," Huckabee said in the statement. "So as we say in television, stay tuned!"

He’s following the Sarah Palin model of quitting his day job to make himself a more attractive candidate. He’s probably trying to drive up Nobummer’s unemployment numbers, and didn’t get the memo from Mitch McConnell that the GOP is now responsible for the economy.

What will the good ol’ Huckster campaign on? Well, we already know he won’t get the Prison Bitch vote. And with making jokes about any kind of rape, he is doing his best to alienate women and feministy men. Maybe he will go after the African-American vote? Well, he did insult the Hands Up, Don’t Shoot movement, but maybe that was a slip-up. In a book, one has more time to really hone a message for an audience, right Huck?

“Jay-Z is a very shrewd businessman, but I wonder: Does it occur to him that he is arguably crossing the line from husband to pimp by exploiting his wife as a sex object?"

We don’t think calling Beyonce a whore is a good way to get votes from African Americans, youth, or that broad swath of public that likes music. We look forward to Huck’s next DC fundraiser, where he will take a piss on the MLK monument before taking a shit on the counter of Ben’s Chili Bowl.

We suppose he will rely on Divine Providence to win the nomination, given that he has declared himself to be God’s Unqualified Tool. We can only hope that the tool God has in mind is a buttplug for Jesus’s threeway with Buddha and Zeus.

We will take Huck’s advice and stay tuned. Good Wonkers should stay tuned to this little mommyblog, as we are sure that the Huckster will continue to provide plenty of material, like manna from heaven.