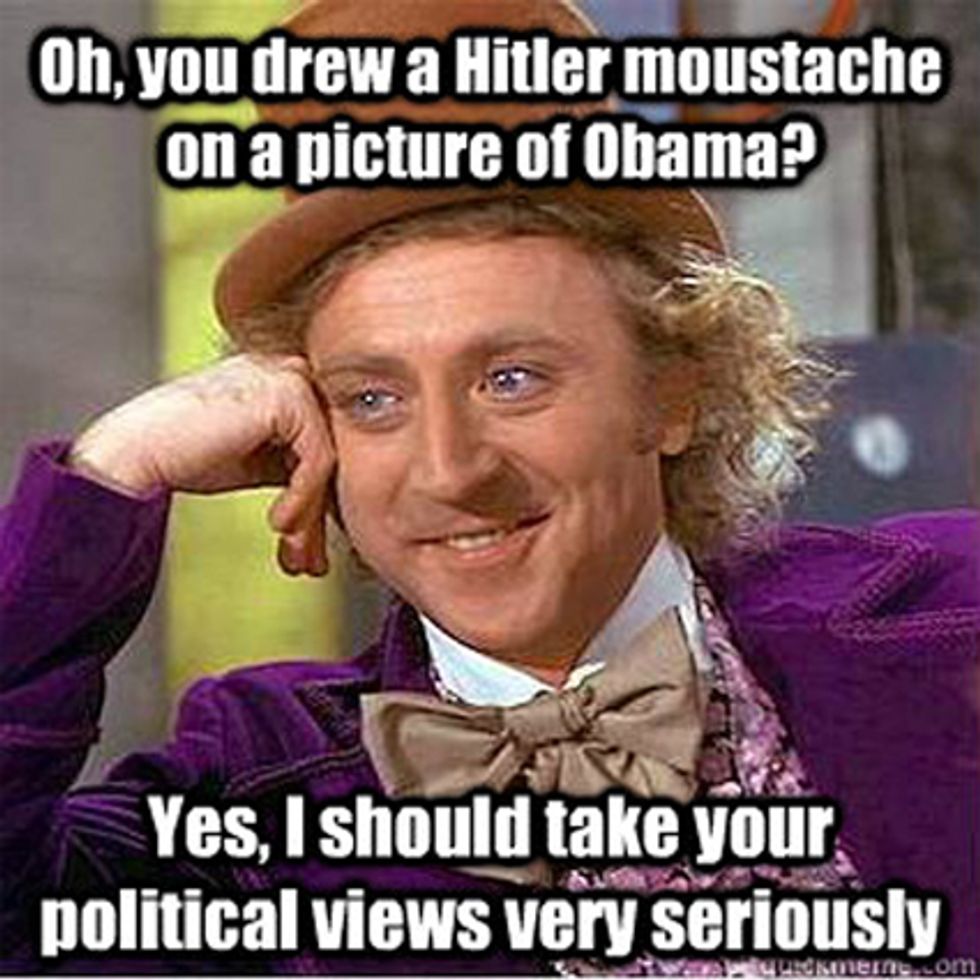 Are we all tired of Obama-is-Hitler analogies? Well of course we are! But Mike Huckabee isn't, because he found a really novel variation on the theme: Instead of Obama being just like a Nazi by forcing Americans to have healthcare or taking their guns away or --one of our favorites -- letting them get student loans, Huckabee actually found some real Jews for Obama to do a Holocaust to! In an interview with Dead Breitbart's Really, A Sirius Channel Is Too A Real Radio Station, Huckabee explained that the recent nuclear deal with Iran is exactly the same as the Endlösung:

This president’s foreign policy is the most feckless in American history. It is so naive that he would trust the Iranians. By doing so, he will take the Israelis and march them to the door of the oven. This is the most idiotic thing, this Iran deal. It should be rejected by both Democrats and Republicans in Congress and by the American people. I read the whole deal. We gave away the whole store. It’s got to be stopped.

Never mind the historical inaccuracy about how the extermination camps worked (gas first, then ovens -- they had a flowchart for this), we are not inclined to believe that Huckabee actually read the agreement, which doesn't involve just trusting Iran (there are inspections) or giving away much of anything. We're still trying to figure out how making Iran give up almost all of its enriched uranium and mothballing most of its centrifuges is a bad deal.

And despite pretty much everyone pointing out to Huckabee that this is a really bad and inappropriate analogy, being Huckabee, he doubled down so hard, he turned his favorite line into a meme:

The main thing we took away from the Breitbart writeup on the interview is that Breitbart horcrux Robert Wilde has one big theocratic stiffy for Mike Huckabee. How's this for a tongue-bath?

Appearing on Breitbart News Saturday, the governor demonstrated his keen ability to articulate conservative principles and values—a likely reason why he enjoys the highest favorability ratings of all GOP candidates running for president in 2016 [...]

Modestly, Huckabee acknowledges that his high favorability rating is good news. “People don’t vote for someone they don’t like. So I just got a make sure I don’t start doing stuff that make people stop liking me,” he chuckled.

Elsewhere, in a paragraph that isn't about Huckabee being open to suggestion, Wilde calls him "the amenable statesman." We're guessing he was going for "affable" but his computer software simply gagged. Wilde apparently thinks the official GOP symbol is a Sycophant. Among other things, we learned that Huckabee says the key to victory in 2016 is for conservatives to communicate more better about their core values, which apparently are unfamiliar to most voters, by presenting

a simple message of “conservatism, limited government, more local government, lower taxes, and less regulation to people who sweat through their clothes everyday and have to lift heavy things to make a living.”

Mike Huckabee loves you, sweaty America! Also, too, he explained for the ninety-jillionth time that America's laws come from God, not the government, and when asked to identify core American values, it is important to be able to quote the second sentence of the Declaration of Independence verbatim, as if you'd just thought of it yourself.

The interview dedicated several paragraphs to Huckabee's thought on the totally real Planned Parenthood eBay-for-baby-parts story, which hasn't been debunked at all.

The 59-year-old author and former Fox News host said that he has formally called for the immediate end to government funding of Planned Parenthood. Unfortunately that may be difficult. Huckabee pointed out that “Democrats get a lot of money from the pro-abortionists.”

The amenable statesman recounted that he has called for the defunding of Planned Parenthood for years. “The fact that they are getting between $500-540 million of taxpayer money is really a disgrace,” he asserted. “It is disgusting to fund an organization like Planned Parenthood that chops up babies and sells the parts like parts to a Buick.”

America needs to “come to grips with a 42-year nightmare of taking babies from their mother’s womb. This needs to come to an end,” insists Huckabee.

So we need to defund Planned Parenthood, which is making a profit from parting out babies and giving the money to fund Democrats, who give money to Planned Parenthood. Oh, and somehow he neglected the detail where, by law, government funding for Planned Parenthood goes only to non-abortion stuff, because why would you mention that? Still, it's good to know someone's going to stop all these babies being stolen from their mothers' wombs, apparently without their consent.

The amenable Breitbart interviewer then got off his knees and wiped his mouth, as Huck zipped up and headed off to his next campaign event.