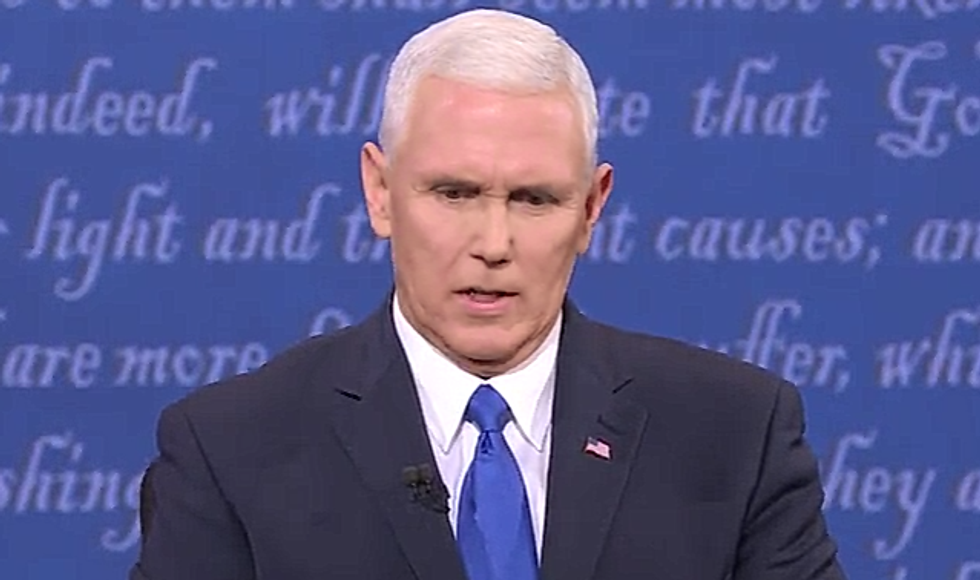 Is there anyone on earth who thinks Donald Trump was NOT playing dry-drunk make-believe when he made those stupid tweets about Nobummer doing Watergate to his phone lines at Trump Tower? (Besides Jason Chaffetz, who proudly serves as the Stupidest Man In Congress whenever Louie Gohmert gets his head stuck inside the shitter?) Like, for real, we need to stop talking about this and focus on Trump's obviously weird and bad ties to Russia, but eh, it's still slightly in the news cycle, so hey, what does Vice President Mike Pence think about Trump's made-up lies?

I think the president’s tweet speaks for itself. He’s expressed himself on it.

By the way, Press Secretary Sean Spicer also said he wanted to let the tweet "speak for itself," because holy mother of God, what the hell else is he going to say?

Here is Pence's obligatory attempt to act like the guy who is "president" is a serious man who didn't pull this lie directly out of his spray-tanned ass:

And we’re very pleased that the congressional committees have made it clear that they will look into that matter, just as they’re looking into every aspect of it.

Oh yes! Jason Chaffetz and Devin Nunes are gonna get to the bottom of it, even though Chaffetz has acknowledged he hasn't seen a tinker's damn worth of evidence that Trump isn't lying. Meanwhile, GOP Rep. Trey "Benghazi!!!!11!" Gowdy isn't even buying it, so that tells you how much credibility Pussgrab McWeakSad has right about now.

What do you want to talk about instead, Mike Pence?

I can tell you that the focus here at the White House is eyes forward and completely focused on the president’s agenda to repeal and replace Obamacare and to put the national security of this country first.

Hahahaha, OK. Are we talking about Paul Ryan's TrumpCare plan what just got released, which LITERALLY EVERYONE HATES? Like, it's hated by so many Republican factions that MSNBC's Kasie Hunt is LOL-porting that it's "already on life support (if not dead on arrival...)"? Is that really what the White House wants to focus on right now?

Mike Pence would like to, again, state for the record that Donald Trump's tweet about Obama's "wire tapp" exists, and it's just a good example of Trump expressing himself and also, while we're on the subject

If you feel like you've just seen a squirrel, click here and give Wonkette a few dollars. It's that simple.