Military Recruiters Not Thrilled With Militia 'Protecting' Them, By Accidentally Shooting Stuff 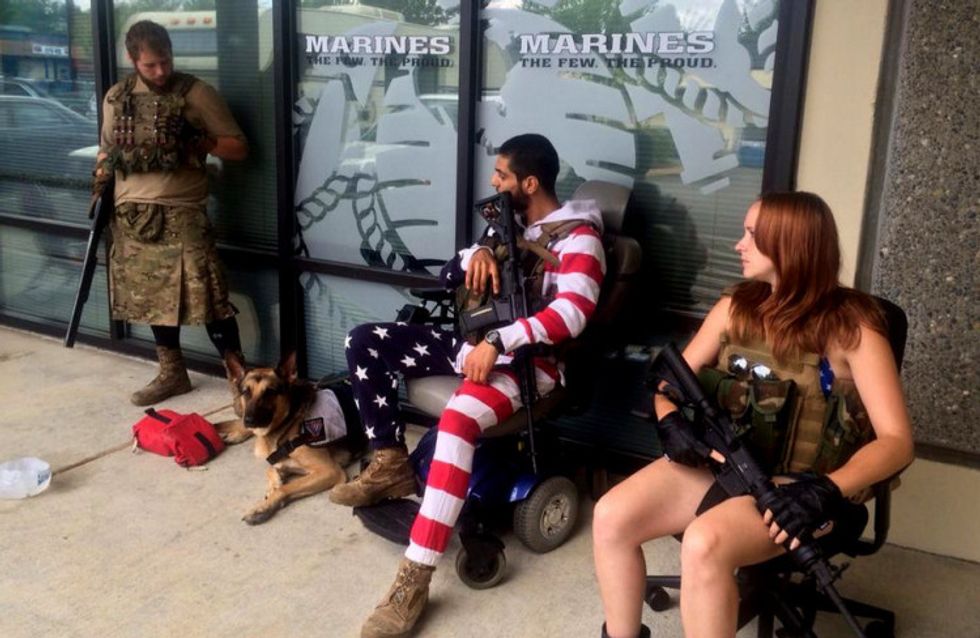 After the Chattanooga shootings, a whole bunch of armed militia loons took it upon themselves to do for the military what the Pentagon was too pussy to do for itself: dress up like they're ready for World War Z and stand around outside recruiting centers, just in case any more 24-year-old Muslim guys with depression and drug problems decide to go on a murder spree. But is the military grateful? No, the ingrates at the U.S. Army and other branches of the military have asked them to please just go away, and advised recruiters to treat armed people milling around outside their offices as a security threat.

For one thing, the military notes, while the Chattanooga shooter did indeed fire a lot of shots through the windows of a recruiting center, the fatalities all occurred at the second shooting site, after he crashed the gate at the Navy Operational Support Center. For another thing, the Army is apparently a bunch of liberal gun-haters who don't understand that only good guys stand around in public with AR-15s and flak jackets:

“I’m sure the citizens mean well, but we cannot assume this in every case and we do not want to advocate this behavior,” according to the Army Command Operations Center-Security Division letter, which was authenticated by the service. [...]

“If questioned by these alleged concerned citizens, be polite, professional and terminate the conversation immediately and report the incident to local law enforcement …,” the command advised.

An Army Recruiting Command spokeswoman, Kelli Bland, offered a less kinetic way for the public to help out: call the police if you see anything suspicious.

“Local communities can support our security by reporting suspicious activity, particularly around recruiting centers,” Bland wrote in an email to Stars and Stripes.

Well, fine, but where's the fun in that? Besides, the self-appointed defenders of Our Troops disagree with the Pentagon policy that doesn't allow anyone but military police to be armed, and they're pretty certain Obama took their guns away -- never mind that the policy long predates the current administration.

In Boise, Idaho, a state that in the fevered imaginings of rightwingers is simply crawling with secret jihadists, the paramilitary gun-humping group "3 Percent of Idaho" has stationed several armed doofuses outside a military recruitment center, but the Marine Corps has asked them to please go home and do something useful with their lives:

“It has come to our attention that many patriotic citizens have been standing armed guard outside recruiting stations across the country. While we greatly appreciate the support of the American public during this tragedy, we ask that citizens do not stand guard at our recruiting offices. Our continued public trust lies among our trained first responders for the safety of the communities where we live and work,” according to the Marine Corps statement.

That's a nice diplomatic way of saying, "GO AWAY." The 3-percenters outside the Boise recruiting office told a reporter from the Idaho Statesman that they were unaware of the Marine Corps request to stand down, but "indicated that they would probably continue to guard the offices." After all, who knows more about military safety -- the military, or armed loons acting on their own? This is America, not Nazi Russia.

Not that anything could possibly go wrong, except when it does, like in Lancaster, Ohio, where militia gun fondlers were ordered to leave a recruitment center Thursday after one of the geniuses accidentally fired off a round from his AR-15. No one was injured in that little boo-boo. Super-patriot Christopher Reed, 28, was charged with a misdemeanor count of discharging a firearm in the city limits after an interaction with a curious fellow citizen:

Reed told police that he was holding his rifle outside the recruitment center when someone asked if he could take a look at it. Reed agreed, and while he was trying to clear the ammunition from the weapon, he accidentally fired one shot into the asphalt pavement.

The only damage was a hole in the pavement.

Even so, the shopping center's owners issued a statement saying that “for the safety of tenants, customers and construction personnel working in the immediate vicinity of the Military Recruiting Center, it would be best to request the removal of the armed individuals.” All over a little hole in the pavement. Don't those property managers know that freedom isn't free?

It also turns out that this is Reed's second citation for the same offense; he somehow managed to fire off another round inside city limits in 2013, and paid a $50 fine. (See above statement about freedom, cost of.) But Reed had some deep thoughts about his heroic defense of the recruiting center from potentially hostile paving materials:

“I’m nobody special,” Reed said in a telephone interview on Thursday. “I’m just a guy doing my job because my own government wouldn’t do it.”

Reed said he is not a military veteran. He described himself as an active gun enthusiast who makes a living working side jobs.

He downplayed what happened. “It is what it is,” he said. “Nobody got hurt.”

God knows we feel a lot safer with patriots like this keeping our military recruiters safe from infinitesimally tiny threats.