Millennials Do Racism Almost As Good As They Do Texting, Studies Show 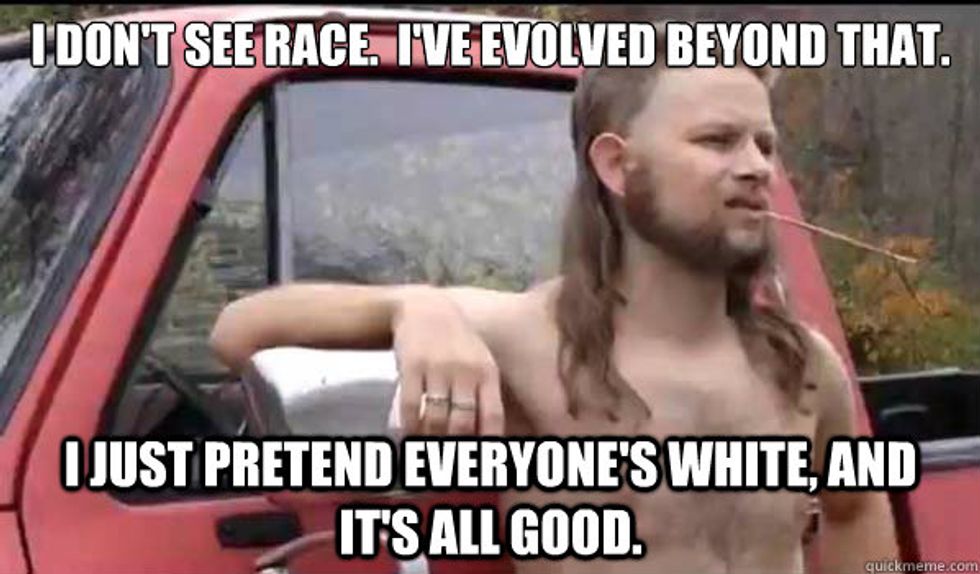 Everybody's always talking about "millennials this" and "millennials that" and "millennials sure do bitch a lot" and "millennials are so bad because of their helicopter parents," but it turns out they're good at something, and that something is racism! Now, now, boomers, sit down and STFU because they're no more racist than you are. In fact, they're a little bit less racist! A LITTLE BIT. According to an analysis by the Washington Post, pulling from data from the General Social Survey, racist inclinations among Whitey haven't changed much over the last three generations:

Among many other questions, the survey asked respondents to rate whites and blacks on a scale from being "hardworking" to "lazy." Using this data, we can categorize respondents into whether they rated whites or blacks as being lazier, more hardworking or the same.

When it comes to explicit prejudice against blacks, non-Hispanic white millennials are not much different than whites belonging to Generation X (born 1965-1980) or Baby Boomers (born 1946-1964). White millennials (using a definition of being born after 1980) express the least prejudice on 4 out of 5 measures in the survey, but only by a matter of 1 to 3 percentage points, not a meaningful difference. On work ethic, 31 percent of millennials rate blacks as lazier than whites, compared to 32 percent of Generation X whites and 35 percent of Baby Boomers.

Essentially, each generation is getting a wee bit less racist than the one before it, but things aren't changing THAT much. The BIG change happened between the Silent Generation and the Boomers, which makes a lot of sense. Boomers were coming of age during the worst parts of the Vietnam War, they watched Dr. Martin Luther King get assassinated, and also they were doing that hippie dippie "let's do sex in each other's mouths in a field of poppies while Joni Mitchell warbles about the painted ponies going up and down" free love thing (that's exactly how it happened), so they were very well positioned to adopt a more open-minded stance toward racial minorities.

This could also be why millennials are leading the pack on support for LGBT issues, since that's the struggle they've witnessed in their formative years. At the moment, a full 73 percent of millennials support marriage equality, compared to 57 percent of the public at large. Guess they're cool with Adam and Steve, as long as Steve isn't a black dude.

These finding seem especially relevant at the moment because Charleston killer Dylann Storm Roof is 21 -- not exactly the stereotypical image of a crusty older-than-dirt guy whose grandpappy fought in the War o' Northern Aggression. And yes, he says he was radicalized by groups like the Council of Conservative Citizens (CCC), but these numbers suggest his attitudes don't make him much of an outlier in that regard, compared to a member of any other post-war generation.

Maybe the next generation, the teens watching Confederate flags come down, will be the ones to make a drastic move toward racial equality. Or maybe they'll just keep sucking like millennials, dunno, whatever, we're all about to go extinct anyway.