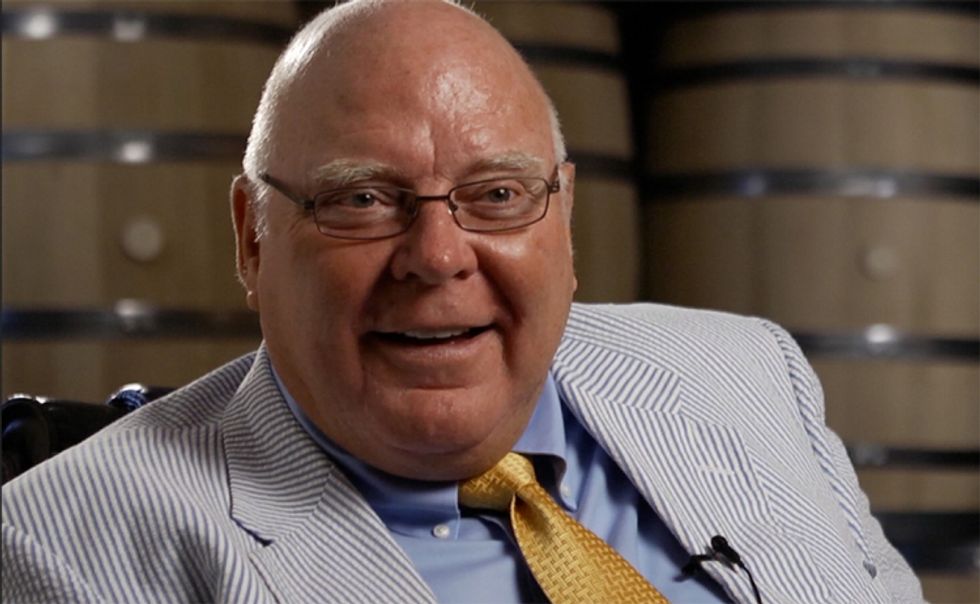 As F. Scott Fitzgerald supposedly said, the rich are different from you and me. Especially if they get anywhere near the defendant's table in a courtroom. Sunday, the Washington Post brought us this inspirational story about a millionaire Donald Trump supporter, John Joseph Boswell, the CEO of a company that makes wine barrels, who got into just a little bit of legal trouble the day before Donald Trump's inauguration -- and in the very same city, too. At the ritzy Mayflower Hotel (which may be an unfair description -- nobody calls the Ritz "mayflowery"), Boswell was feeling a bit overly full of victory, so while a maid was making the bed in his room, he

approached from behind and began rubbing her buttocks, according to a police report.

“This is very nice stuff,” he said, according to the report. “I like that!”

The maid, an African immigrant, makes $20 an hour, and Boswell makes about $600,000 a month as CEO of "Independent Stave Company, the world’s largest wine-and-whiskey barrel manufacturer." He lives in a $7 million mansion in Palm Beach Gardens in Florida, about 20 miles from Mar-a-Lago, although he doesn't appear to be a pal of Donald Trump's, despite their shared interests in grabbing women without permission (allegedly, for Trump). We'll let the Washington Post do the narrative heavy lifting when it comes to the day before PussGrab in Chief's inauguration, because eww. When Boswell began grabbing her,

She froze and, in shock, apologized to him, according to the police report. “Sorry sir,” she said. “Sorry sir!”

When another maid emerged from the bathroom, Boswell “immediately moved,” the report said. The first maid rushed out of the room, shaking, and told her co-worker that she would have to clean it by herself.

As the second maid attempted to make the bed, Boswell approached her, too, and “placed his hand on the top of her shoulder” until she ordered him to sit down, according to the police report.

Neither woman reported the incident. But the next day, when a co-worker told a manager what had happened, police were called.

Boswell was arrested January 20, just as the inaugural parade was getting into the lit-up-tractors portion of the poorly attended festivities; the maid identified him for police. He spent a night in jail, and was released at the same time many DC protesters were, which resulted in this bizarre scene, which might well be adapted for the renewed season of "Arrested Development":

At first, the crowd cheered, mistaking him for a protester. Then someone who had been in court when Boswell was charged shouted that he was a “sex offender.” Protesters began throwing things at him. An orange slice struck Boswell in the head.

“Well, that wasn’t very nice,” he told a Post reporter, wiping the fruit from his forehead before walking back toward his hotel.

Yr Wonkette would like to offer that orange-slice flinger a beer.

Boswell insists he never touched the woman's buttocks, but that instead, he'd simply "patted her on the lower back" as "just a friendly geture," because he just teleported to our world out of an episode of "Mad Men" -- not one of the Emmy-winners, either. His attorneys tried to get prosecutors to allow a "deferred sentencing agreement," which would let Boswell plead guilty but then have his record expunged if he had good behavior for a while. The assistant U.S. attorney, Vivian Kim, wasn't about to let that fly, pointing out in a letter to Boswell's attorney, "He took advantage of [her] while she was working, vulnerable, and alone," and noting that Boswell could have faced charges in harassing the other maid as well.

So hooray for Ms. Kim being a prosecutor who was in no mood to overlook a 70-year-old's youthful indiscretions. Unfortunately, Judge Michael Ryan threw a very tiny book at Boswell -- maybe one of those novelty Bibles the size of your thumbnail: After pleading guilty April 11, Boswell was sentenced to 10 days in jail (suspended) and six months' probation on a charge of misdemeanor sexual abuse. And the judge hit the millionaire with an onerous $50 fine -- a fifth of the maximum allowable penalty -- to be paid into the "crime victims compensation fund." Bet he's learned his lesson!

Which is this: If you're famous, you can grab 'em by the pussy and they let you get away with it. If you're merely rich but not famous, you can grab 'em by the ass, leave 'em so angry that they break into tears whenever the topic comes up and so afraid of your attorneys that they move to a new apartment, and you can get away with a $50 fine. Oh, and the probation, which isn't apparently crimping his style much anyway:

The judge and the prosecutor also agreed that Boswell could travel overseas while on probation. Last month, he was allowed to fly to the Bahamas. At the end of this month, he is scheduled to spend two weeks in the Dominican Republic for a family reunion.

Busy man. Has places to be. And probably some maids' asses to grab, in countries where they still respect a man with money.

Yr Wonkette is supported by reader donations and day drinking. Please donate generously by clicking the linky below, and we'll try to find you a less horrible True Crime story later.