Milwaukee Sheriff David Clarke Proves He Is Fascist, Sh*thead, Shouldn't Be In Charge Of A Rest Stop Bathroom 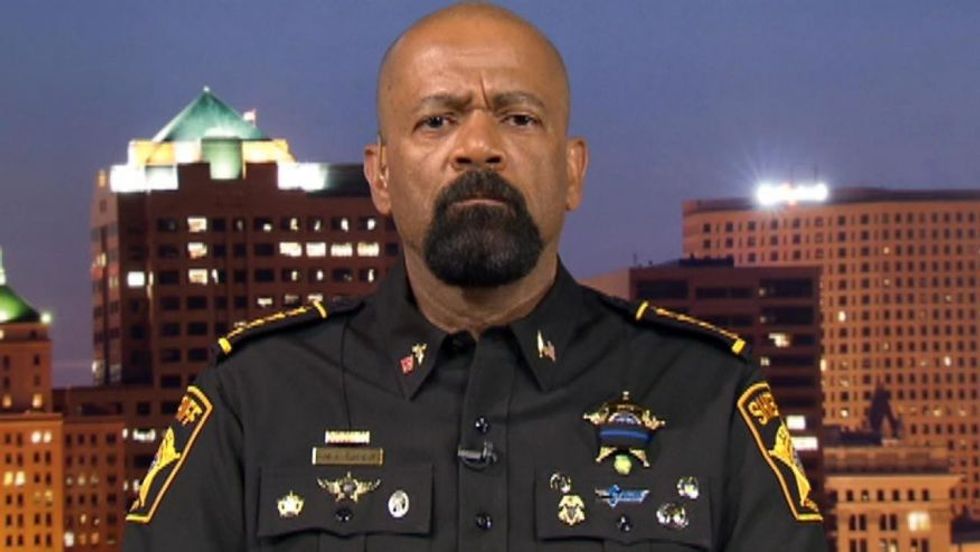 David Clarke, he's this guy. Sheriff of Milwaukee. Jerkoff. "Democrat," LOL. Accused of arresting a man for shaking his head at him, he not only didn't deny it, he said he had preempted the "threat" of headshaking, and dude was lucky he hadn't "knocked him out."

[wonkbar]<a href="http://wonkette.com/610826/nutbag-sheriff-david-clarke-went-to-the-womens-riot-and-all-he-got-was-these-hurt-fee-fees"></a>[/wonkbar]In addition to being VERY GRRR MANLY, he is also terribly delicate: He went to the Women's March and was TAUNTED. And then he was TAUNTED AGAIN! His reply was a whine that the women wouldn't fight him, and where were the cops when he needed them?

Well, over the weekend, there were many (MANY) MASSIVE actions around the country, as "President" Donald Trump's illegal executive order banning permanent US residents from their homes based on nation of origin (which is, again, illegal) was met with whole fuckloads of citizens in the streets. Perhaps you saw some pictures! There was Copley Square in Boston:

And there was Washington DC:

Pic in Washington by your compatriot 'LipTherapy'

And there was a little but loud one in Denver, where your Editrix and her fam made a surprise appearance, because of how we're still not even back in Montana yet from DC's Women's March, and shit is POPPING UP ALL OVER:

The point is they were EVERYWHERE. So what does Milwaukee Sheriff David Clarke, who is sworn to uphold and protect the Constitution, think of all this?

The left isn't protesting . It's resistance to our constitutionally elected POTUS. It's showdown time. Pushback time. Are you ready? I am. pic.twitter.com/iNoWZhTIb3

Oh. That "Constitution" he's talking about. What's it a "warning label" for? Extreme toxicity? Because the Constitution we've read says,

Congress shall make no law respecting an establishment of religion, or prohibiting the free exercise thereof; or abridging the freedom of speech, or of the press; or the right of the people peaceably to assemble, and to petition the Government for a redress of grievances.

[wonkbar]<a href="http://wonkette.com/611043/arrivals-departures-resistance"></a>[/wonkbar]What were people peaceably assembling for, in order to petition the Government for a redress of grievances? An executive order prohibiting the free exercise of religion! So that is like a five-fer, right there!

In fact, and we're sorry to say this, because It Is A Bummer, but despite the mass, MASS outcry, in the streets, regarding that very executive order -- which three individual judges ordered stayed, the executive branch is still not complying.

While they've backed off the ban for permanent residents (green card holders), agents of Customs and Border Patrol are still not permitting detainees to see lawyers, as mandated by the Constitution Clarke says is his "warning label," and the White House is doing its level best to provoke a constitutional crisis by telling judges it won't be complying.

A senior White House official said earlier Sunday that the president had the right and Constitutional power to enact the order. According to the official, the judge's decision changed nothing.

"All stopped visas will remain stopped. All halted admissions will remain halted. All restricted travel will remain prohibited," the official said. "The executive order is a vital action toward strengthening America's borders, and therefore sovereignty. The order remains in place."

With the federal judges' ruling appearing to conflict with the executive order, uncertainty and chaos continued across the nation as lawyers sought access to those detained at airports and reports rolled in that Customs and Border Patrol agents were not abiding by the federal ruling.

Sheriff Clarke can posture all he wants about what he thinks "the Constitution" is (might makes right, presumably). He's wrong, he's small, he's stupid, he's weak, he looks like he smells like too much Axe, he's an embarrassment to the good people of Milwaukee and the rule of law, and he's up for reelection in 2018.