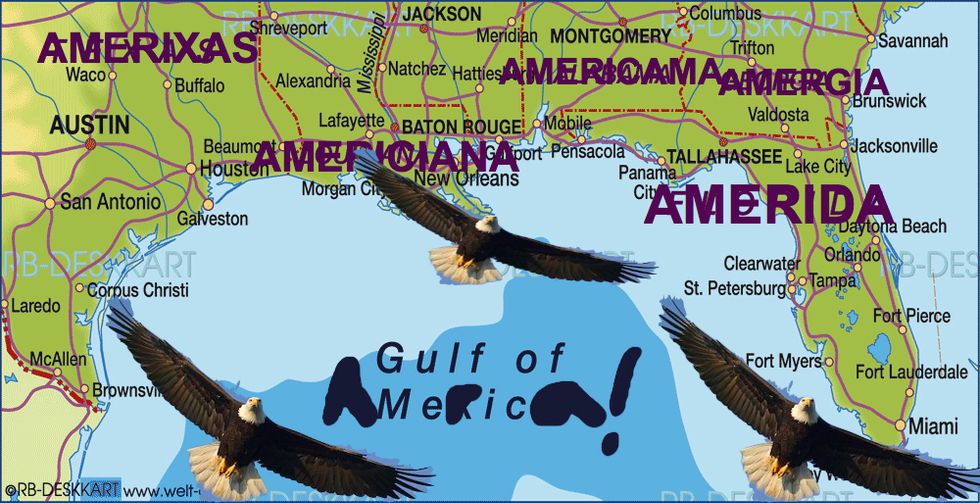 Steve Holland, Democratic Representative of Mississippi, has embraced the latest trend of taunting the powers that be with a bill proposing renaming the Gulf of Mexico the Gulf of America! H.B. 150 was introduced to Mississippi's Marine Resources Committee this week, and it contains real words about why this is potentially actually happening (knowing Mississippi, which is a beacon of change). Fittingly, Holland doesn't even mention the Gulf of Mexico BY NAME in ANY part of this bill, which is a mere 12 lines long. He, turning his head away in feigned disgust as he typed the words, trying hard to hold back his lunch, calls it "the body of water that is located directly south of Hancock, Harrison and Jackson Counties."

The bill amounts to:

For all official purposes within the State of Mississippi, the body of water that is located directly south of Hancock, Harrison and Jackson Counties shall be known as the "Gulf of America."

Now, Stephen Colbert proposed after the BP oil spill that no one would want the gulf anymore and we should at least rename it; "We break it, we buy it." But the fear, loathing, bigotry, racism, isolationism, imperialism and OILism that this bill invokes might, frighteningly, sound like a GOOD IDEA to a hefty swath of America, just like Rick Santorum and his wackadoodle followers probably did not get and LOVED Senator Constance Johnson's whole "sacred sperm" thing from a mere two days ago!

The bill proposes that the new name, which sadly would only be official in this one state (but there's hope that Holland's pioneering message will spread across the nation), will come into effect on July 1, 2012, i.e. right before Independence Day. Which is of course a celebration of being set free to do unto others as our dead and former king did unto us!

Update! Steve Holland is thrilled that his story has spread so far and wide, but also hopes that everyone gets that it's a joke. Initially, hardly anyone in the media did, including us, because we are all apparently deep, deep cynics. [Best of New Orleans/ThinkProgress]