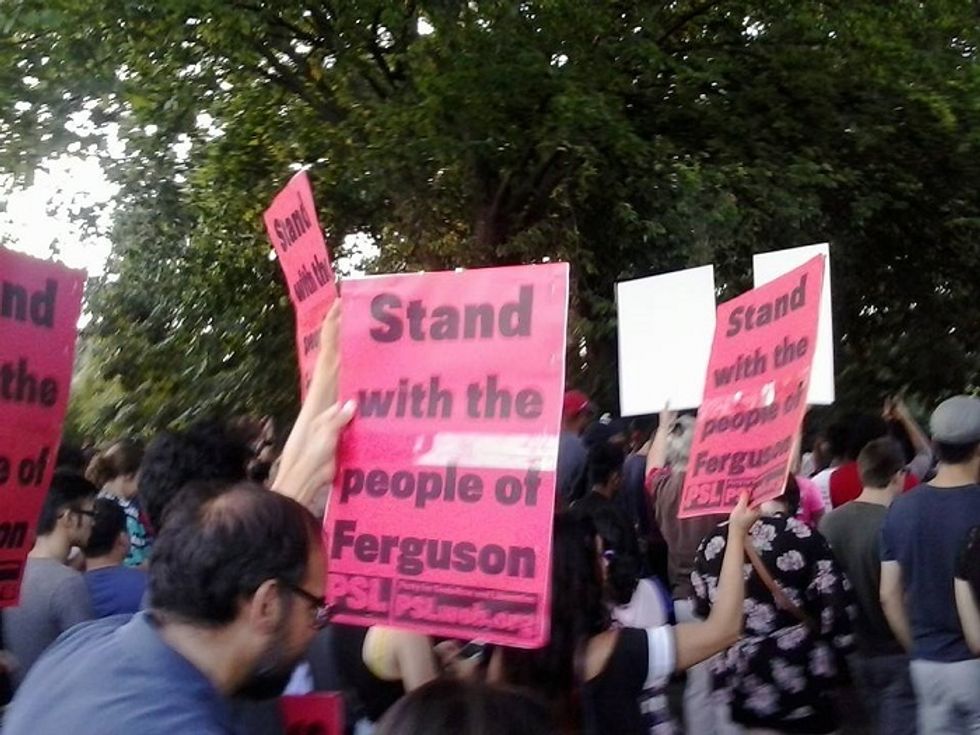 A Missouri-based affiliate of the Ku Klux Klan is circulating a clumsily designed flier vowing to "use lethal force as provided under Missouri Law to defend ourselves" from "terrorists masquerading as 'peaceful protestors,'"reports Vice News. Here's the "document":

Obviously the first thing we notice is those flaming "KKK" graphics in the header, which would look great on a top-of-the-line Geocities site. Also, what is that font? It's not Comic Sans, more like Comic Sans' straight-laced brother. Sober Sans?

The next thing we notice is the incredible irony of the KKK calling Ferguson protesters "terrorists." The FBI has a lot of information about the KKK filed under "Other domestic terror threats" and "White supremacy extremism."

The Bureau has been investigating the criminal activities of white supremacy extremists like Ku Klux Klan members since as early as 1918.

At press time, random individuals protesting police violence in Ferguson are not classified as domestic terrorists by the FBI. It's not clear why the Missouri KKK felt they had to inform everyone that they would be obeying the self-defense laws in Missouri. Of course they or anyone else in the state has an affirmative right to defend themselves "from what he or she reasonably believes to be the use or imminent use of unlawful force by such other person." It would be something else if they said "Nah you know what, just come murder us with your terrorism, it's cool." It is a little weird, however, that the, uh, "Imperial Wizard" of the Klan's national, uh, office? disavowed the Missouri chapter's focus on Ferguson:

"There hasn't been some kind of mandate coming down from the top saying we need to get people out to Ferguson," Frank Ancona, the group's Imperial Wizard, told VICE News in August. "I see no purpose to interject the Klan into this whatsoever. We'd create more discord and more animosity against whites and law enforcement up there if we were present."

He'd also disavowed another KKK splinter group in South Carolina that had been fundraising for Officer Darren Wilson in August, which he wanted to make clear had nothing to do with the real KKK:

“No one has ever heard of the guy, I talked to the older members of our group,” he said. “There are other legitimate Klan organizations, but this group here sprang out in the last year or so I don’t believe he has any members. I think it’s just him.”

Between this and the Montana Klansman who is just SO OVER white supremacy, you might be wondering what the heck is going on. Probably just that the Klan is withering away as being openly racist becomes less acceptable in police society, and all the fish in the white supremacy mud puddle are starting to panic as the mud fills their gills. Still, everyone in Ferguson be careful. Weird as it may seem, these people are real, and they're getting desperate.