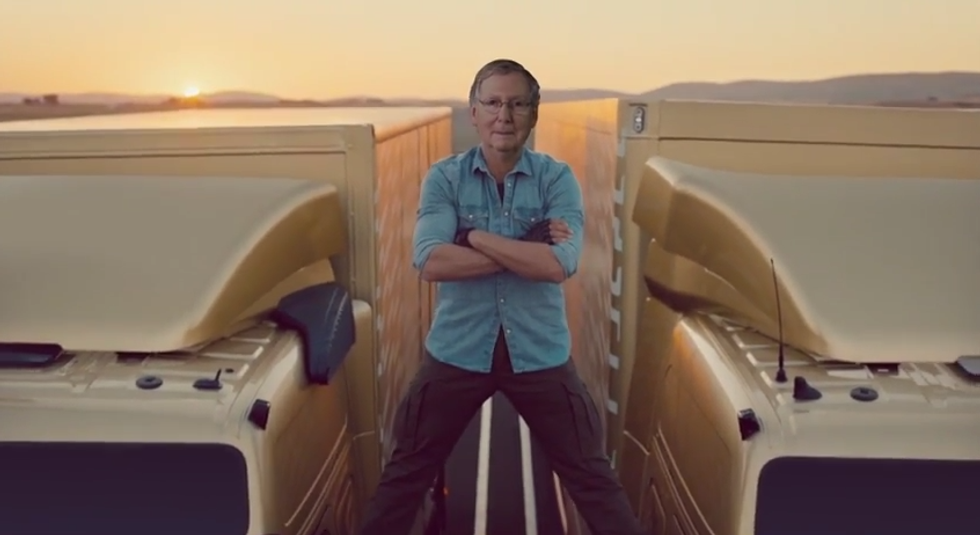 Kentucky Sen. Mitch McConnell may not be a scientist, but he is a likable, funny human being-type person. Why, just look at all of his clever ads that prove it!

Like this ad, where Mitch McConnell talks about ads. So human! So funny!

And here is Mitch McConnell with some dogs. Dogs love him!

Here is an ad featuring Mitch McConnell talking to "Chef Woody Moore," who is a regular Kentucky person who also likes Mitch! Because Mitch is very likable. He's a great senator and a great friend. Woody says so!

How could you possibly vote against a guy who's friends with the dude who runs the deli counter? Do you hate America? And cold cuts?

Farmers like Mitch too. Here are some farmers, saying how much they like Mitch. You can't argue with farmers, especially when they're so grateful that he helped "restore tobacco buyouts" with federal subsidies, which Mitch normally hates, but it's different when it's for his state's tobacco farmers. For America! And Kentucky! And lung cancer!

Why, just look at all these farmers, none of whom are white men because Mitch is all about The Diversity, doing some farming:

Silly us. We were under the impression that Mitch McConnell was kind of a jerk, on account of his long record in the Senate of being a jerk. Like how he voted against renewing the Violence Against Women Act, but then pretended he did not because he is not only a jerk but also a liar?

Ah, but that was our mistake. Now that we know dogs -- and farmers! and Woody! -- all support Mitch, plus he's got a great sense of humor, we think Kentucky should definitely send him back to the Senate so he can repeal Obamacare like he's promised to do. Not to worry, Kentucky, he'll keep your new state exchange program that you love so much in place with some Mitch magic:

Kentucky Kynect is a Web site. It was paid for by a $200-and-some-odd-million grant from the federal government. The Web site can continue. But in my view, the best interest of the country would be achieved by pulling out Obamacare, root and branch…. Now, with regard to Kynect, it’s a state exchange. They can continue it if they’d like to. They’ll have to pay for it because the grant will be over. And with regard to the Medicaid expansion, that’s a state decision. The states can decide whether to expand Medicaid or not. In our state, the governor decided to expand Medicaid.

Huh. That's so strange because we are pretty sure that Kentucky Kynect is more than a website. It's the extension of health insurance coverage that only exists because Obamacare. But Mitch hates Obamacare! But Mitch loves Kentucky, and Kentucky loves its new expanded health coverage. So Mitch will just murder Obamacare, but not the parts Kentucky loves. Don't ask how; he just will. Or maybe Mitch is just joking again? He's so funny like that.