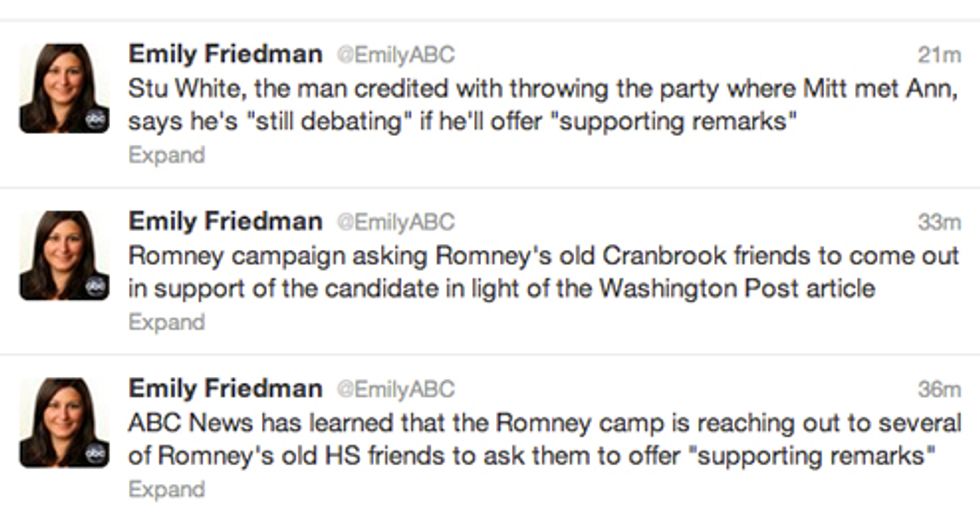 Preppy shit Mitt Romney is responding to today's story about him leading a high school mob to hair-rape a gay in classic style: First,apologizing while laughing his ass off, and then struggling to solicit "supporting remarks" from the few classmates he didn't terrorize. Boy howdy, we're having some fun now. Did you know that Mitt Romney also hair-raped people in college and Michael Barone also thought he was a jerk in high school? Please, don't get all caught up in the torturous "DOES THIS MATTER??" handwringing. Let's just continue laughing at how much of a little prick the youthful Mitt Romney was.

Hunter Walker notes that there was much more about wacky Romney hijinks in an earlier Washington Post story that didn't cause such a brouhaha, because it wasn't gay hair, maybe. Just dirty public university hair:

Mr. Romney’s shaving incident, which his father, former Michigan Governor George Romney revealed in a 1970 speech, occurred while he was a student at Stanford. The elder Mr. Romney said Mitt and his friends lured students from the University of California into a trap where they “shaved their heads and painted them red.”

And did you know that Mitt Romney was the French killer in Scream? (SPOILER ALERT, PREVIOUS SENTENCE):

One night in Bayonne, in southern France, Keele answered a knock on the door and saw two men, their faces hidden by sheets, ordering him in French to put his hands behind his back, turn around and not utter a word. Keele fled out the back door only to hear Romney, his mask removed, laughing uproariously in the house.

And here is almanac specialist and cherished high-end wingnut Michael Barone recalling that, much like Michael Barone, Mitt Romney was a "jerk" back at fairest Cran-upon-Brook:

BUT DOES THIS MATTER?? Eh, why the hell not.

Okay, okay, one more, which Pareene brings back to the spotlight: