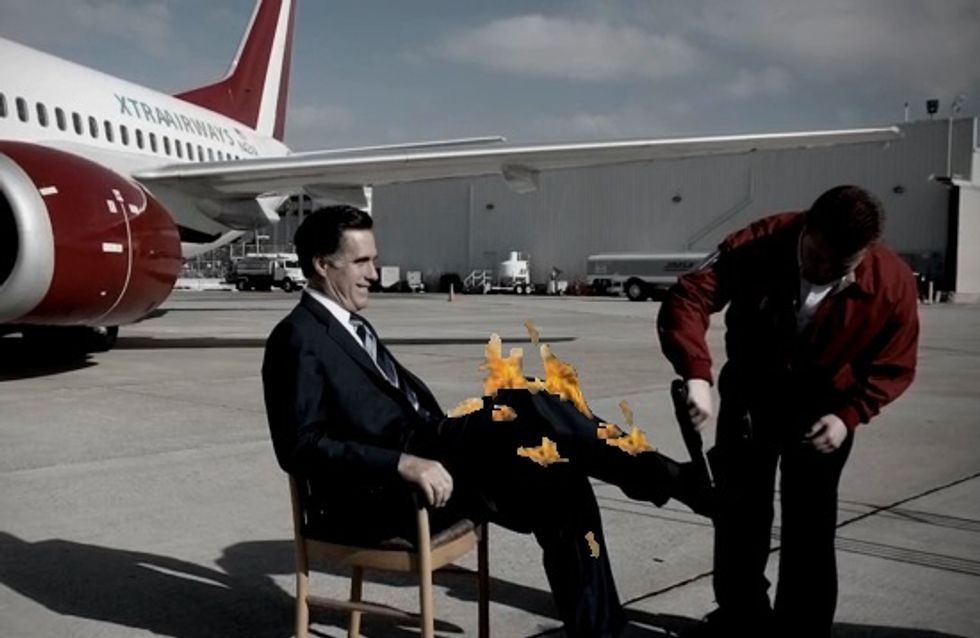 Now that Mitt Romney has let it be known through "supporters" and "his wife" that he is definitely serious about not winning the White House at least one more time, he is also letting it be known that he has learned some things from the last multiple times he did not win the White House.

For example, as the New York Times reports from its knees so as to be just the right height to fellate the multi-time loser, the Romneys have learned to live more modestly and limit themselves to just owning a few homes throughout the country instead of ALL the homes throughout the country. Why, they might even put their tear-down beach mansion -- the one with the car elevator and private lobbyist -- on the market! It's the kind of noble sacrifice the Romneys are willing to make to demonstrate just how much they want to be humiliated again in 2016.

We also learn the real reason Mitt accidentally and "not elegantly" mentioned to his rich donors when he thought no one else was listening, or recording, that the (skewed) 47 percent of Americans who would never vote for him were a bunch of moocher taker losers "who are dependent upon government" and think "they are entitled to health care, to food, to housing, to you-name-it" and don't even pay their taxes. Turns out, it's because he was just answering some jerk and forgot people were listening -- a mistake he will not make again.

“My mistake was that I was speaking in a way that reflected back to the man,” Romney said. “If I had been able to see the camera, I would have remembered that I was talking to the whole world, not just the man.”

Next time, in fact, Mitt has a whole strategy for assuring he does not say stupid things every five seconds.

“I was talking to one of my political advisers,” Romney continued, “and I said: ‘If I had to do this again, I’d insist that you literally had a camera on me at all times” — essentially employing his own tracker, as opposition researchers call them. “I want to be reminded that this is not off the cuff.”

Also, too, Mitt is still pretty bitter about that whole President Obama beating the crap out of him in 2012 thing.

He spoke dismissively about his visit to the White House shortly after the 2012 election — the cursory meeting in which the former combatants are supposed to play gracious, take pictures together and make noises about issues on which they might work together in the future. “It was intended to check a box,” Romney said of the president’s invitation. He was not offered any follow-up, which was typical, Romney said, according to what he heard from some of his executive friends. “No one gets the impression that what they are saying is being incorporated,” he told me. “I won’t mention who it was, but I met with one of the nation’s top Republican leaders, and he said, ‘You know the strange thing is that the president seems to answer to only two people — Valerie Jarrett and Michelle Obama.’”

Stupid Obama wouldn't even take him seriously when he was invited to the White House to share all his winning ideas for how Obama should president like Romney would president if anyone had wanted Romney to be president, which they did not.

We also learn many other fun facts about the Romneys that make them just as unlikable and awkward as they have always been. Like, for example, that Romney Lunch Hour involves "a small buffet of sliced turkey, corned beef, two loaves of Pepperidge Farm bread (white and wheat) and a selection of both mayonnaise and Miracle Whip."

Mayonnaise and Miracle Whip. So fancy! Guess there are some luxuries the Romneys aren't quite ready to give up.