Mitt Romney Has 'Thoughts' On Baltimore And Hillary Clinton, Still Not Running For President (Wink Wink) 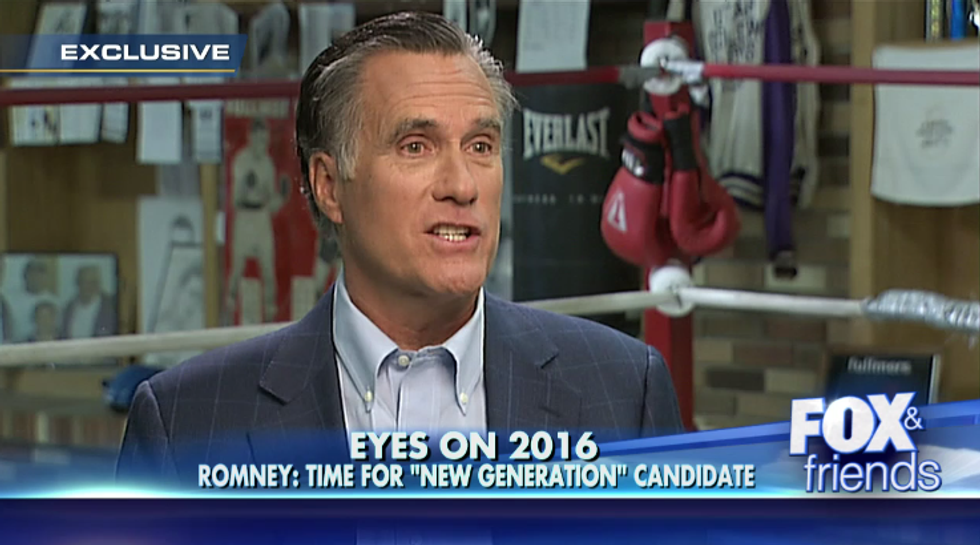 If you are a perpetual loser of the Republican persuasion, there's really no better place to go for some tender loving ball-fondling than Fox News. So Mitt Romney spent some quality time with "Fox & Friends" non-blond host Brian Kilmeade, to talk about his big charity boxing match with Evander Holyfield later this month, and to sneak in a "serious conversation about what's happening in the country, and what's happening in politics": the alleged murder-by-cop of Freddie Gray in Baltimore; how much Hillary Clinton sucks; the Republican Party's need for a fresh face like, say, Jeb Bush; and how beloved he and Ann are (no, he is not joking).

Mitt still watches Fox and receives his daily GOP talking points, because while he acknowledges that some people who are protesting in Baltimore and around the country "are demonstrating their First Amendment rights, and that's laudable," there are "some people" whose behavior proves the "breakdown of society in many respects."

As for Maryland State Attorney Marilyn Mosby charging six police officers for the death of Freddie Gray, Brian Kilmeade (because he's a great journalist) just wants to know, "Do their lives matter too?" To which Romney responds:

I think people who are in a position of authority should stand by the police officers and the justice system and the rights of the accused, and they should not jump to conclusions if they possibly can avoid that. At the same time, I think it's appropriate for elected officials to say, "We have problems in our cities. These are things we need to address. Here's how I propose to address them."

Oh yeah? Like maybe address the broken justice system and the mass incarceration of Americans, especially African-Americans who comprise nearly half of the incarcerated population and are imprisoned at six times the rate of whites? And how that just might contribute to poverty rates in communities of color, which leads to the kind of protests and "mayhem," as Romney calls it, that we are witnessing around the country? Kind of exactly like Hillary Clinton said last week, when she talked about mass incarceration as a contributing factor to poverty? Nah, don't be stupid. That's not what Romney means at all:

Well, I was concerned that her comments really smacked of politicization of the terrible tragedies that are going on there. When she said, "Look, we're not going to have mass incarcerations in the future, it's like, what is she referring to? We don't have mass incarcerations in America. Individuals are brought before tribunals, and they have counsel. They're given certain rights. Are we not going to lock people up who commit crimes? Is that what she's suggesting? I thought it was a very inappropriate thing for her to do, and I think it was political in nature to try and get more support in the African-American community, and I think it was a big mistake on her part and simply wrong.

Yeah, Clinton was just inappropriately pandering for black votes by acknowledging certain realities Mitt Romney has never heard about. But that doesn't mean he doesn't have his own ideas for how to address the aforementioned breakdown of society:

I believe the kinds of changes I've spoken about, to help people in their homes and education and jobs and discipline and two-parent families -- that's something we have got to do instead of just talking about it.

Those are some solid suggestions, and gosh, doesn't Romney sound sort of like every other Republican who is running for president? Shit-talking Hillary Clinton and then claiming his ideas are the best ideas to fix America? Huh. Even though he said in January that he is not going to even try to be a three-time loser? Or at least, it is "unlikely" that he will run? Yeah. About that:

Both Ann and I were pleased to have so many people suggest that they'd like to see us run again, and that obviously opened our eyes a bit to potentially running again. And I think we're very anxious to make sure that we win, that we get someone who can actually beat the Democratic nominee, and we wondered, "Might that be me? Might I be the best one to carry the torch." And so we looked at it for two or three weeks and concluded, you know what? It's probably best for someone new to come along. Someone who's not in my political generation, someone new.

What with Romney's careful use of adverbs -- he is "unlikely" to run again, he thinks it's "probably best" to let someone else be the GOP's sacrificial lamb this time -- we almost believe that he really is not considering running for president one more time. After all, there are so many other qualified Republicans in the field now. No reason for Romney to let Rand Paul and Marco Rubio and Carly Fiorina and Ben Carson and Rick Santorum and Mike Huckabee beat each other to bloody pulp piles, only to then swoop in and graciously agree to save the party from itself. It's not as if Romney has spent his entire life dreaming of being president one day. So we definitely take him at his word that he's really out of the game this time. And everyone knows it's a safe bet to take him at his word, because once he commits to a position, he never EVER changes his mind.