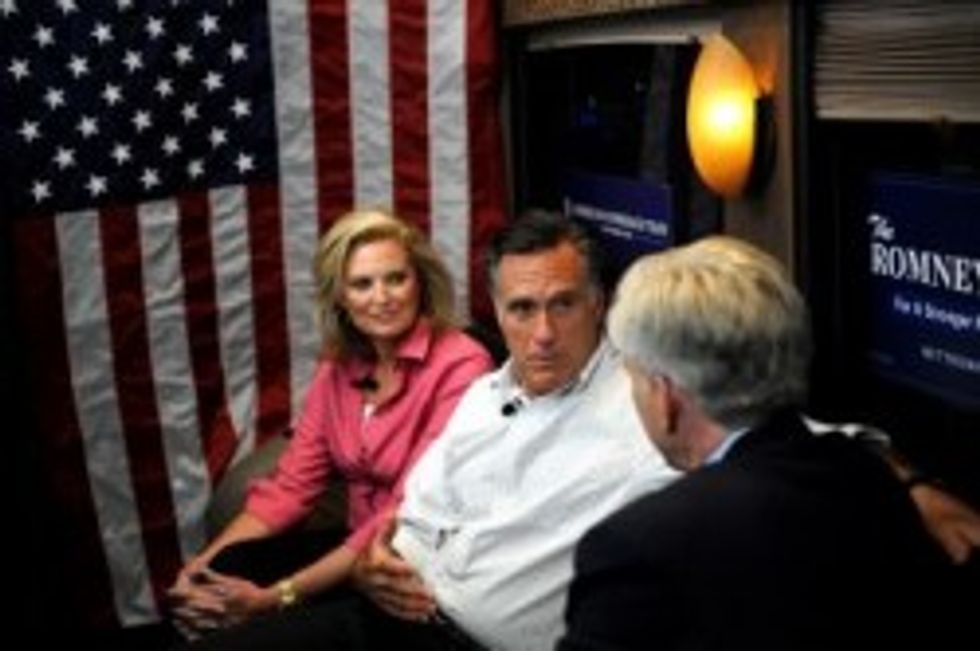 Yesterday, David Gregory had an exclusive breaking up to the minute two-part interview with the Romneys onMeet the Press. The first part of the interview was spent awkwardly sitting super-close to the Romneys and asking them kind of silly questions as the bus bounced up and down and maybe David Gregory got a little bit carsick.

At one point, Gregory asked the Romney hive mind if it would keep any parts of Obamacare. Romney responded thusly:

Romney told Gregory he “likes parts of” Obamacare, and that he would leave in place the prohibition against excluding people with pre-existing conditions and the policy that lets young adults stay on their parents’ insurance policies “up to whatever age they might like,” Romney said, rather unbelievably. “I say we’re going to replace Obamacare. And I’m replacing it with my own plan. And even in Massachusetts when I was governor, our plan there deals with pre-existing conditions and with young people.”

This is really, really big news. Obamacare guarantees that you will not be discriminated against in terms of pricing or insurance issue if you have a preexisting condition, even if you were not covered while you had the preexisting condition. Because this is 2012 and we live in America, this is somehow still an issue that needs to be dealt with.

Romney has never said this before, and so it is a massive shift in his stance on this issue. That means, of course, that it was actually a massive screw-up, and  it's all the liberal media's fault.

@aviksaroy explained here when rolled out his plan in June wapo.st/LTnwpi .. But press ignored so now they're surprised #lazyMSM

Thanks, Jennifer Rubin! You're the best at being a really creepy middle-aged version of Alicia Silverstone's character from The Crush with a sinecure at the Washington Post for no discernible reason!

As it turns out, the Romney plan, two hours later, is this:

The preexisting coverage plan would prevent re-rating of patients or exclusion of coverage if they go from an individually purchased plan to an employer plan or the reverse. (ERISA already protects those who move from one group plan to another.) For those first entering the insurance market, states will have the latitude to develop mechanisms such as high-risk pools for those hard-to-insure individuals.

This is essentially the state of insurance as it currently exists under HIPAA, coupled with some vague nod toward insanely expensive state-run insurance pools for people who are unlucky enough to take jobs that don't offer health insurance or who can't afford to pay $900 a month for COBRA coverage after Bain loads up their employer with debt and then sells off the asset. (I kid, I kid, Bain Capital made money by selling sugar cookies and lemonade on the side of the road.)

In other words, Romney's plan is to do what we already do, but say it's a new plan, and not grant any additional preexisting condition coverage to anyone.

The National Review, however, did not get the above tweet, probably because they find Jen Rubin as insufferable as everyone else on the fucking planet does. They asked the Romney campaign for a clarification, and this is what they got:

In reference to how Romney would deal with those with young adults who want to remain on their parents’ plans, a Romney aide responded that there had been no change in Romney’s position and that “in a competitive environment, the marketplace will make available plans that include coverage for what there is demand for. He was not proposing a federal mandate to require insurance plans to offer those particular features.”

So now, Romney has flip-flopped on the part where he said young adults would be covered on their parents' plans and also the part about the preexisting conditions. (Ed. - National Review edited out that part, Think Progress has the original edit.)THERE WILL BE NO PLANS FOR ANYONE TO GET ANYTHING SO SHUT UP AND NEVER EVER LOSE INSURANCE OR DON'T GO TO THE DOCTOR IF YOU DO, MKAY?

Turns out the Romney campaign got confused by whatever question National Review asked (exclusive: it was a single text asking "WTF???"), and has the real real answer that it meant to give all along.

"Gov. Romney will ensure that discrimination against individuals with pre-existing conditions who maintain continuous coverage is prohibited," the aide said.

So, basically, sort of what Jen Rubin said at 11 AM, but without any specifics, and probably what his plan was before he opened his big yap on the bus to keep David Gregory from puking all over him or asking if they could be bunkmates when they got to camp.

The real lesson of all of this: Jen Rubin is always right. Always. The other real lesson: Mitt Romney will protect your right to be continuously insured as long as you have continuous insurance by doing absolutely nothing whatsoever because Congress already took care of that when he was just a failed Senate candidate.