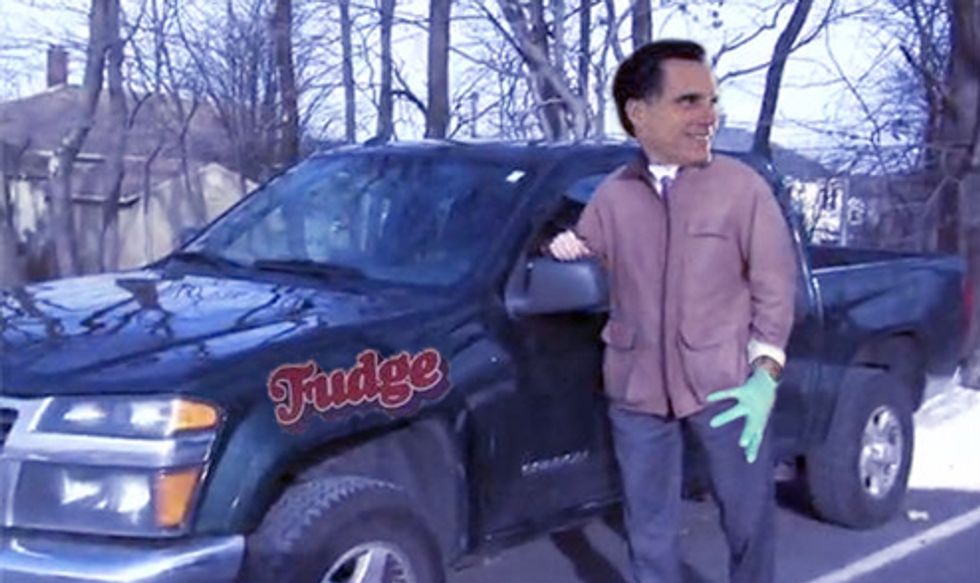 Mitt Romney is "reintroducing himself" to the conservative base after running for president for six to seven years. He comes bearing the most creative of new economic plans: A bigsloppy tax cut to throw in everyone's fat faces.

His previous 59-point plan of modest technocratic tweaks, anchored by a large cut to investment income taxation rates for those earning under $200,000 per year -- precisely what the proletariat needs right now! -- wasn't nearly bold and Reagan-y enough for the blowhards. So now he's got this new thing where he'll just slash every tax bracket by 20 percent -- not to be confused with "20 percentage points," which Romney certainly hopes people will confuse it with.

Here's the simple plan as devised by economist Glenn Hubbard, the same jerk who designed the Bush tax cuts during his time at the White House. Since those cuts have done such a marvelous job of destroying the country, Romney will provide a second obnoxiously large version of it:

But -- and this is a deeply unRepublican thing -- he apparently plans to offset this megabuttload of trillions of dollars in additional tax cuts by stripping some high-end deductions:

But he added that Romney is committed to making his plan both “revenue neutral” – meaning it won’t add to the budget deficit — and “distributionally neutral” – meaning that it won’t shift the tax burden from upper-income Americans to middle and working class Americans. Since the largest benefits from rate reduction would go to upper income taxpayers, so will the burdens of “base broadening” reductions in existing deductions needed to keep the government from hemorrhaging revenue, he explained.

The math here would seem to require reducing or eliminating some of the bigger lower- and middle-class deductions and credits to neutralize this hilariously large tax cut, though. Common sense suggests that this is how things would play out, too, with the lower- and middle-classes subsidizing tax cuts for the rich as the final product of a legislative process assembled specifically to ensure that doesn't happen.