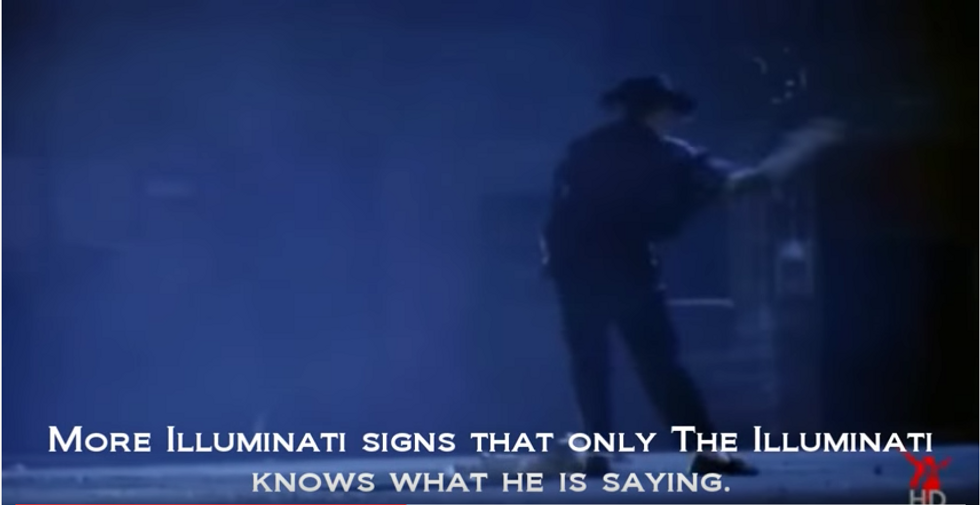 Conspiracy theories! By and large they are hilarious, but for the love of god, the videos conspiracy theorists make are SO LONG. I mean, I'm here for a quick vid of some dude spraying vinegar at the sky trying to get rid of chemtrails, but I am not about to sit still for two hours while some other dude is interviewed about how he didn't remember he was was raised in a Satanic Ritual Abuse cult run by Project Monarch, Charlie Sheen and the Bilderberg Group until he stopped drinking water with fluoride in it. I have ADD! Thus, my favorite genre of these videos has always been the ones dissecting music videos, where some genius points out all the illuminati symbols in a given music video.

As someone who once tried to pull off writing an essay in high school claiming that the tree in John Knowles' A Separate Peace symbolized a thing she would consider jumping from herself if she had to spend one more moment of her life trying to figure out the deeper meaning of every sentence in that boring ass book, I am fascinated by their commitment and attention to detail. Even if it is all completely ridiculous.

There are SO MANY to choose from. Someday, perhaps, I will do a retrospective of my favorite "ABSOLUTE PROOF Beyoncé is the queen of the Illuminati" videos, but today I will share with you one of my favorite music video analysis things of all time, the one about how the end of Michael Jackson's "Black or White" video TOTALLY PROVES THAT THE ILLUMINATI MURDERED HIM.

Now, TO THE UNTRAINED EYE, one might take things at face value and think -- given that this is the end of the video for "Black or White," a song about racism -- that Michael Jackson smashing things with racial slurs written on them has something to do with racism. BUT NO. Actually he is smashing Satanic symbols and Illuminati symbols. Because like, on the car with "Go home n----r" written on its rear view mirror, the G's look like sixes. When he breaks a window with "KKK Rules" graffiti drawn on it, he is smashing it not because it's the KKK and they are pretty famous for being racists, but because they are RUN BY THE ILLUMINATI.

ALSO, he points a lot, ostensibly to Illuminati symbols that are off screen, and does Illuminati hand signals that only the Illuminati can understand. Also, towards the end of the video, he puts his hands on his chest vaguely in the shape of an "upside down pyramid, which means he is going to take down the Illuminati. Which, given the existence of Beyoncé, he clearly never got around to doing.