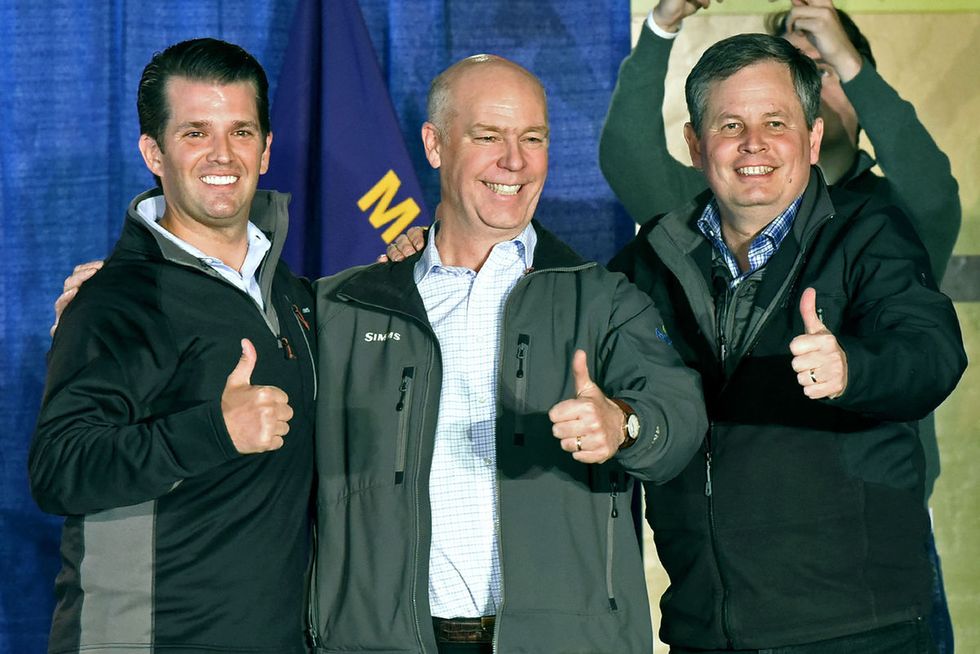 Greg Gianforte, the Montana billionaire Republican running for our state's sole seat in the House of Representatives, went insane tonight, violently knocking a reporter for the Guardian to the ground and breaking his glasses. It's on audio, and it's awful. You can hear Terrifying Dad screaming that he's had ENOUGH (of a reporter asking him a question about a CBO score, released late today, for the AHCA), and the quavering voice of a reporter in shock trying to figure out why he just got knocked to the ground.

A Gianforte campaign statement had no concern that the whole thing could be heard quite clearly on tape (above!), when it released this statement:

Can't see it on your phone? It basically says, "I tried to get the phone out of my face, he grabbed me and 'spun away' then fell on top of me and broke his glasses, that pencil necked 4 eyes liberal coastal elitist faggy boy REPORTER who should probably be lynched."

A Buzzfeed reporter, Alexis Levinson, saw reporter Ben Jacobs's feet fly into the air; within about half an hour, she saw Gianforte drive away with aides, unmolested by law enforcement.

Whitney Bermes, from the Bozeman Chronicle, confirms that the Gallatin County sheriffs are investigating, although by all accounts, not investigating hard enough to keep a man who'd just assaulted a reporter from driving away from the scene of a crime.

Greg Gianforte is extremely unpopular in the state; he underperformed President Donald Trump by 10 points just last November, when he lost the race for governor to Democrat Steve Bullock by almost five percent.

The election is tomorrow, Thurs., May 25. The local news (though early; here's hoping they've gotten their act together by 10 p.m.) did not mention the assault at all; KECI (NBC) instead covered:

the election (including an invite to view interviews with the candidates on its web site;

the weather (it was very windy today);

and a landslide in Big Sur (California).

So how will this play out? Not a soul knows. But we wouldn't be surprised if Gianforte were a little on edge tonight because he knows he's going to lose, because nobody likes him; if we go by the vaunted Peggy Noonan yard sign metric, Quist should receive about 90 percent of the vote. And hell, maybe a lot of those types of Trump supporters will see Gianforte literally sending a reporter to the hospital and think FUCK YEH, BAD MEDIA UNFAIR GORP DERP FART.

Wouldn't put it past 'em.

On Planet Earth, we say fuck you, Greg Gianforte, you lousy thug piece of shit. You don't get to be in polite society. Go give some more money to Nazis, and hang out with them instead.