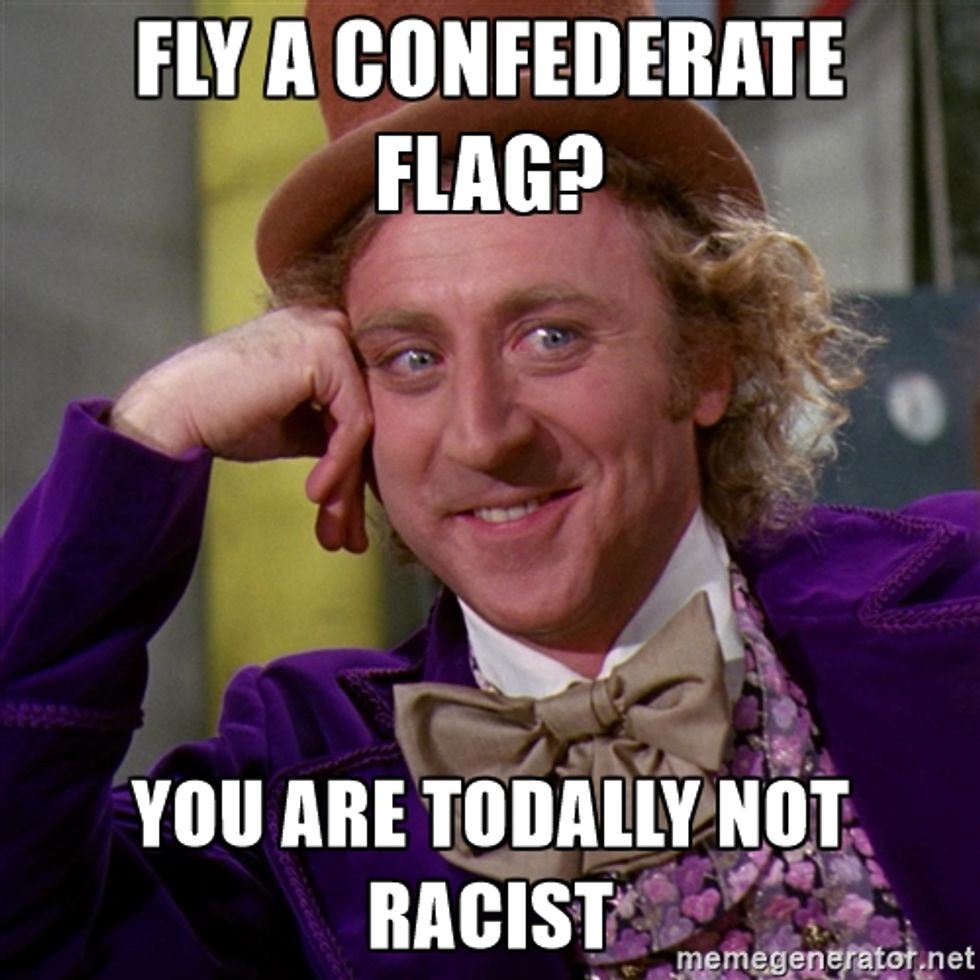 A high school in the tiny Montana town of Livingston (population 7,044) has banned the Confederate flag from school property after the school enrolled its one and only black student. Get ready for the predictable shitstorm of butthurt neo-Confederate morons crying about white genocide and the like, although things at the school itself seem to be calming down.

Shortly after Darius Ivory, 19, began attending Park High School in April, a 17-year-old white student reportedly threatened to drag Ivory behind his truck, at least according to the student rumor mill. You know, the way white kids sometimes joke around. Vice Principal Tim Gauthier spoke to the white kid, who denied having threatening Ivory, but happily acknowledged not liking black people one little bit, because he's from Missouri and being a racist was like his cultural heritage and stuff:

"He comes out and said he doesn't like black people and is racist," Gauthier said. "In my 20 years as an educator, I'd never heard someone admit they were racist."

The 17-year-old was raised in Missouri and had a bad perception of black people, Gauthier said. The student was warned there would be consequences if the behavior continued. The 17-year-old's mother told Gauthier later that she said the family did not share their son's beliefs.

At least not in public when somebody asks, for heaven's sake. This might be a good place to mention that the black population of Livingston is .03 percent.

A couple weeks later, on April 22, the same student drove to school with a Treason Flag flying from his truck, because it's about heritage, not hate or something. Who knows what he could possibly have been thinking? As it happens, another student -- by "really bad coincidence," says Gauthier, who is either very naïve or very gullible -- also showed up flying a Confederate flag from their vehicle that day. At some point during the school day, another student removed the flag from the first student's truck and burned it, according to a video shown to police by the 17-year-old's father, according to Livingston Police Chief Dale Johnson. That student may be cited for theft and destruction of property.

Things were getting a bit nuts, so school administrators suspended the 17-year-old -- who had been warned, after all -- and announced the Confederate flag wouldn't be welcome on school property anymore. An email sent to parents explained the flags had disrupted the school day, and that "most classes had to devote class time to address student concerns and anger," so no more flags of a nonexistent nation that lost a war 150 years ago, please (we're paraphrasing very freely there).

Outraged students started complaining about the oppression of their free speech rights, and every single Facebook account in town (as many as twenty, we guess) exploded with anger on one side or another. Eventually a bunch of students drove to school with the Flag of Southern Shame on their trucks, which they pointedly parked off school grounds, across the street.

"The second group didn't do it for racial reasons," Gauthier said. "They did it because they were angry at the ban."

Uh-huhh. Just listen to these Free Speech arguments from one of the protesting students:

"It's basically a protest of it being banned from school grounds," said Sam Rockafellow, a Park High sophomore and lifelong Livingston resident who flew a Confederate flag from his pickup truck Friday. "They are trying to ban it from America altogether."

"I would say it's history," Rockafellow said of the Confederate flag. "Getting rid of this from the history books would be a big ol' slap in the face to America."

"People would consider me a racist for having this flag. I think the exact opposite," he said. "The exact opposite is being kind to every religion and race. Everyone gets a fair shake in my book."

Yup. Asking people not to wave a symbol of racism in the face of black people is exactly the same as razoring passages out of the history books.

For his part, Darius Ivory says he isn't especially bothered by the Confederate flag. He moved to Livingston from Houston, and has seen a Confederate flag or two already. He even had one on his phone for a while, so go figure. He says "I don't see anything racist about it," and that it's just an expression of Southern pride.

Which pretty much underlines the fact that this is a story about high school kids who still have a hell of a lot to learn about American history. Still, let us pause a moment and praise the Billings Gazette for spelling "faze" correctly while quoting Ivory.

And there's even some good to come out of the whole kerfuffle, perhaps: Ivory says that on the whole he feels very welcome and supported at the school, and that he has talked with the kid who had made the racist remarks:

"[Ivory] asked to meet with the boy who had made the comments," Gauthier said. "They ended up talking for over an hour. It was interesting. I mean the student didn't pull any punches; he was clear about what he thought."

Ivory said when he spoke with the 17-year-old student and heard where he'd grown up and his experiences with black people, he understood where he was coming from. Since then, he has made a point to continue to spend time with the student. Though the 17-year-old dropped out following his suspension, he returned to school Monday -- something that didn't bother Ivory.

So, hey, that sounds like either a little improvement, maybe. Would have been nice to hear the racist 17-year-old white brat was moved to change his perspective. If you wanted to be cynical -- we won't pretend to read minds -- Ivory's comments could also sound like the one black kid in school smiling politely and saying everything's fine, you bet. Should be very interesting to read Ivory's college essays in a few years.

The school district hosted a community meeting Tuesday, and while Gauthier says there was tension between pro- and anti-flag factions (and let's give credit to the fact that there IS an anti-Confederate presence!), he believes most people understood why the flag was banned. The ban will remain in place until the end of the school year, and oh dear, here goes our cynicism reflex again, we're going to assume that next fall it won't be needed because Darius Ivory will have graduated by then? Shame on us for ever thinking such things.