Moon Rockets, Space Brains, And Vampire Squid, All In This Week's Sci-Blog! 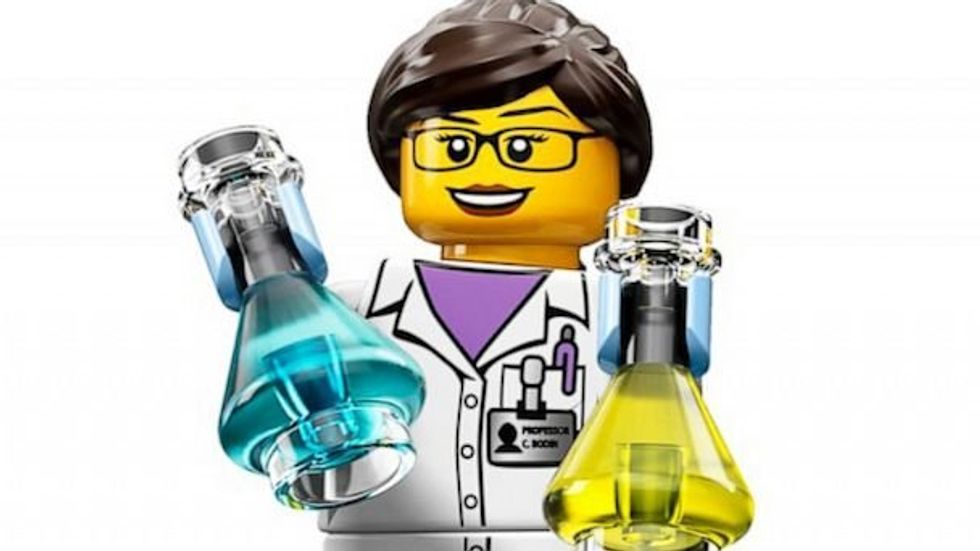 Hi there, Wonkeratti! It's time once again for another appalling Wonkette sci-blog.Check the seals on your pressure suit and come on in!

At 11:27 p.m. EDT Friday, NASA successfully launched a moon rocket exploration mission from the Space Coast. Woohoo, we're goin' to the Moon! Sounds like it's the mid 1970's, doesn't it? It's 2013, though and there has been change. Instead of the Kennedy Space Center, the Space Coast we're launching from is now the Mid-Atlantic Regional Spaceport in the Eastern Shore of Virginia at the southern tip of NASA's Wallops Flight Facility. This was the the first-ever lunar mission to launch from Virginia. Instead of an enormous, heavy lift Saturn V designed specifically for the Moon program,the launch vehicle was a smaller, 5 stage Minotaur V, constructed by the Orbital Dynamics company. Orbital Dynamics converted the Air Force's retired stockpile of LGM-188 ballistic missiles to the Minotaur satellite launch vehicles. You might remember the LGM-188 better if we used its officially-designated euphemism "Peacekeeper" or its problematic development name "MX." No longer carrying  a payload of 10 300-kiloton civilization obliterating bombs, these rockets are lofting instruments of exploration. Swords into Plowshares -- that's change we can believe in. After the jump, a nice video of the launch, courtesy of NASA Television:

Ah, and that leads us to the last difference - the mission. Instead of launching tons of equipment and humans for a landing, NASA's sent a nifty little robotic probe -- the Lunar Atmosphere and Dust Environment Explorer (LADEE) -- into a lunar orbit, to solve a decades old scientific puzzle. In December of 1972, while the Apollo 17 mission astronauts were exploring the Moon's surface, they noticed sun streaks or rays right at lunar twilight. They looked exactly like the very familiar crepuscular rays we see on Earth in morning and twilight. Pretty, yes, but problematic. Light rays are only visible if they're pointed at you, or if they are reflecting off tiny particles of dust or water vapor along their path. The Moon should have absolutely no atmosphere at all for dust or vapor to hover in, so how can this be? Later missions and ground-based instruments have confirmed that our Moon has a very tenuous atmosphere, estimated to be about 1/100,000th the density of Earth's. It's about the density of our atmosphere right at the borders of space -- above the altitude where the International Space Station orbits.  We know it's there but nothing about what its components are and where it originates. Was it formed by volatiles outgassing from the Moon's interior,  from cometary or meteor impacts, from gasses stripped off the Earth's atmosphere, or something completely different? This is where LADEE comes in.

The Lunar Atmosphere and Dust Environment Explorer probe will send itself on a trajectory to reach the Moon in 30 days. It will then execute an engine burn to slow itself down enough so that it enters lunar orbit at elevations varying from 20 to 60 kilometers from the surface. LADEE will then orbit the moon for 100 days, analyzing the components of its atmosphere with  an Ultraviolet and Visible Light Spectrometer (UVS), measuring the density of the  atmosphere with an Neutral Mass Spectrometer (NMS), and capturing and analyzing atmospheric dusts with the Lunar Dust Experiment (LDEX) instrument package. The atmosphere (or "exosphere") of our Moon is thought to be similar to exospheres seen around other small planetary bodies, such as Mercury, in our solar system. LADEE is the latest in a long line of NASA lunar probes, from Pioneer 4's flyby in 1954 [CORRECTION - it launched in 1959. Thanks, Weejee!], though the comprehensive mapping survey of the Lunar Reconnaissance Orbiter and the remarkable gravity survey of the GRAIL mission in 2011. All have expanded our knowledge of the Moon and the lunar environment dramatically.

The other neat thing about the LADEE mission (aside from, you know, SCIENCE!) is that the probe is the first use of a a new class of modular spacecraft. Called the Modular Common Spacecraft Bus, the spacecraft is assembled from standard off-the-shelf "Modules" (propulsion, navigation, etc) with mission specific instruments added on. Rather than custom designing and fabricating spacecraft for every mission, the Modular Common Spacecraft Bus platform can turn out probes much faster and cheaper, using proven, well tested components. These days, with the specter of the Sequester hovering over much of science and Congress not even willing to spend money on their favorite recreation (war, of course), Cheaper and Faster is clearly the way to go in space exploration. We hope that the Modular Common Spacecraft Bus platform is Better, too. Or at least as good.

The huge storm on Saturn that raged from 2010 through 2011 pulled up water ice and ammonia from more than 160 kilometers below the "surface" of the planet's cloud layer. Researchers analyzed data from NASA's Cassini mission probe and have published their findings online, in the journal "Icarus".

The Green Bank Telescope (GBT), the world's largest fully steerable telescope, which is able to search an unprecedented 80 percent of the sky and invaluable for astronomy, astrochemistry and astrophysics research was nonetheless recommended for closure in a massively unpopular report (pdf) by a National Science Foundation Committee in August 2012. Austerity strikes again. There is a bright side, however. In July the Senate Committee on Appropriations approved an increase in funding for the NSF of $542 million, and the budget did not include closing the GBT.In addition, the Green Bank Telescope's supporters have found a few sponsors, which may make all the difference.Let's hope so.

Hey! the LEGO company, that bastion of traditionally male tiny plastic play figures, has released their first ever Female LEGO Scientist! Now, that's progress. Let's hope that, as a recent hire, the Sequester doesn't cut her funding and she's got to move to China.

All of the best current cosmological models have a very disturbing aspect to them that no one really likes to talk about. Due to quantum fluctuations in space and time things could just pop into existence out of the vacuum. Things like fully formed conscious entities, which the theoreticians called Boltzmann Brains. Odd as it sounds, there's nothing in the maths that prevents these Brains from popping into existence and, given enough space and time, completely filling the entire Universe. Well, if a Universe packed full of Brains frightens you, fear not: it turns out that recent discoveries have suggested that the mass of the Higgs Boson will end the Universe before the Brains take over. Whew, that's a relief! 'Course, if that's what the Brains want us to think...

Scientists have found this in the Peruvian rain forest and no one has any idea just whatinhell it is. Is it Aliens? A weird bug amusing itself? Faeries? It's probably Aliens.

There's a mammal that goes into a lethargic state of hibernation for long periods of time, that could hold the key for people surviving very long duration human space missions. No, it's not your cousin and his worthless video gaming friends on the couch, it's the western fat-tailed dwarf lemur.

It turns out that the Earth's gravitational field varies much more than was previously known. A joint Australian-German research team used topographic information generated by the U.S. Space Shuttle to generate the most detailed gravity map of the Earth to date.

(The previous three posts were Ripped from the Wonkville Headlines! Thanks to close_read & actor 212!)

The Wonkville Tip Line is responsible for this absolutely infuriating story we have now. On the latest episode of Creation Today, uploaded to YouTube, World Net Daily contributor David Rives maintains that the Big Bang Theory is bad science because -- wait for it -- it CONTRADICTS THE BIBLE! Will we ever be free of these towering nincompoops? That's it, I'm having a drink. You just send these kinds of links to enrage me, I know and it works.

Well, I can't think of a better time to put in your Cephalopod Video of the Day -- the bizarre and intriguing deep sea Vampyreteuthis infernalis squid. Explain this, Creationists!