More Legal Fuckery From That Fucker Paul Manafort: A Lawsplainer About His Bad Lawsuit That Sucks! 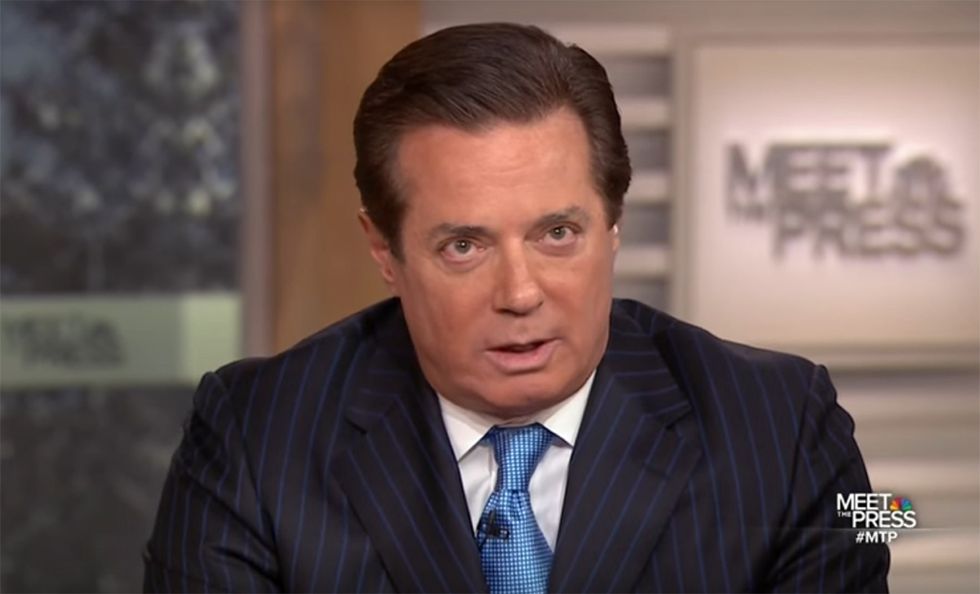 Before another batcrap crazy news cycle pulls us down into a sea of guano, let's take a minute and deal with Paul Manafort's new lawsuit against the DOJ, Rod Rosenstein, and Robert Mueller. Sure, Manafort is under investigation for laundering money for Ukrainian oligarchs. But Ukraine isn't Russia, so how can a Russia investigator even arrest him for that? Plus, he's charged with tax and real estate fraud that didn't even happen during the campaign! UNFAIR! So Manafort would like a judge to make all the charges against him disappear along with the whole Mueller investigation, okay?

Look, we could give you a technical explanation for all the ways this is NOT a real lawsuit. Manafort has no standing to file, the special counsel statute specifically allows Rosenstein to authorize Mueller to look into any illegal activity, Manfort's Ukrainian ratfucking is relevant since he was doing it on behalf of Russian oligarchs, blahblahblah. Here's two tweets from superlawyer Neal Katyal -- just take his word for it, okay?

THREAD. Why Manafort's lawsuit against Mueller/DOJ is so silly.

This will take just 2 pictures. 1. Rosenstein said in testimony last month that Mueller had received authorization for all he's doing, and if there was any ambiguity about it, he got Rosenstein's permission: pic.twitter.com/SJ60pxy2b3

2. When we wrote the DOJ regs, we explicitly codified in the Fed Register that a Special Counsel could seek to expand his authority to unrelated matters, including just to put leverage on a witness. We said the proper course was to ask the AG if there is ambiguity to authorize pic.twitter.com/KmCw6zkC04

Bottom line, Mueller is likely using unrelated crimes as leverage to force Manafort to testify against Trump, and Manafort doesn't want to deal. He'll never get a court to step in to stop the special counsel pressuring him, but like the Justice Department told Buzzfeed, "The lawsuit is frivolous but the defendant is entitled to file whatever he wants."

So, why is Manafort filing a bullshit lawsuit that he knows he can't win?

We're just spitballing here, but we think it probably has something to do with the fact that Robert Mueller has his nuts in a vise. Manafort's been under FBI surveillance for years, they have all his phone, email, and bank records, and he's been charged with multiple counts of real estate fraud. The guy is looking at a lot of jail time, and he'd very much appreciate it if someone from the GOP would throw him a lifeline and get rid of the special counsel entirely.

Manafort's not really making his case to a federal court in DC -- he's throwing up a flare and hoping that Devin Nunes, Matt Gaetz, and the rest of the treason squad can gin up the red team to fire Mueller already. As Fox is his witness, Paul Manafort does NOT intend to spend the rest of his life in jail, dammit!

.@mattgaetz: "If Bob Mueller were any more biased, we'd have to give him credentials for the mainstream media." pic.twitter.com/B8K25ED1Oc

This one calls for a little bit of speculation, so bear with us. Michael Flynn had good reasons to cut a deal with Mueller. He wanted to protect his son, avoid jail time, and possibly preserve his military pension. Moreover Flynn, like Papadopoulos and Manafort's associate Rick Gates, has money but he doesn't have MONEY. Manafort has MONEY, and even if he spends $10 or $15 million on legal fees, he'll still have MONEY. So his math is different -- he has every reason to throw dollars at his lawyers to file a bullshit lawsuit on the outside chance that it will get Mueller fired. Also, too, Manafort got that MONEY by doing business with some very bad men. If he pleads guilty to money laundering, he'll have to tell Robert Mueller all about his dealings with Oleg the Oligarch. And that can be very bad for your health. So Manafort's got strong motivation to keep rolling the dice and hoping his lawyers will hit the political jackpot.

Great. Back to whatever fuckery Bannon has unleashed since we quit typing. Can't hardly wait!

Please money us! We have been reading so much Bannon nonsense we feel like Breitbart staffers, except, like, not assholes of course!