More Speeches You Don't Care About, Before You See Them On TeeVee 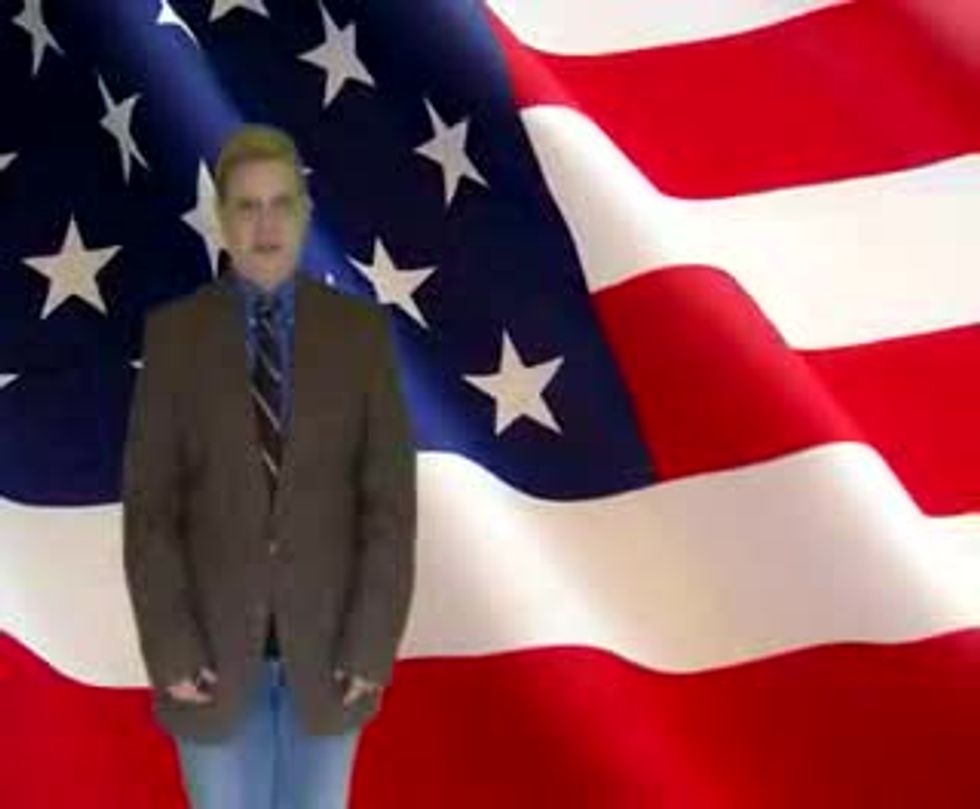 Welcome to the last night of this horrid week, which started with a hurricane and ends with an old man struggling to read a teleprompter -- an American Journey, really. Anyway, your entire Wonkette Team is here, at the Xcel Center, just plain eatin' sandwiches and typing, from tables on the Club Level (?), and we will liveblog things such as John McCain's speech, or maybe we'll just burst out of here with the usual disgust in about an hour, and blog from Liffey's Pub, again & forever. Let's glance over the Lindsey Graham and Tom Ridge speeches that are embargoed, okay?

By every measure, the surge of troops into Iraq has worked.

Sectarian violence and coalition casualties are at record lows.

15 of the 18 political benchmarks have been met.

The Iraqi's have a larger, more capable Army. Oil production is dramatically increasing.

This week, Anbar Province, once an Al Qaeda stronghold, was turned over to the Iraqis. And all American combat brigades who made up the surge have returned home.

We know the surge has worked. Our men and women in uniform know it has worked.

I promise you -- above all others -- Al Qaeda knows it has worked.

The only people who deny it are Barack Obama and his buddies at MoveOn.org.

Why won't they admit it?

Because Barack Obama's campaign is built around us losing in Iraq. Without John McCain's courageous leadership there would be no surge.

I was there with John McCain and Joe Lieberman every step of the way.

In our visits to Iraq, we saw the situation deteriorate.

The troops we met - the sergeants, captains, and colonels - had such respect and admiration for Senator McCain they felt comfortable giving him something he knows a lot about -- Straight Talk.

They said -- Senator McCain, this ain't working. John heard their message and put their interests ahead of his own. He came back to Washington and told everyone, including Republicans, - we must change course.

For his honesty, some accused him of being disloyal. But John McCain's loyalties have always been to his country and to our men and women in uniform.

Not a political party.

Calling for more troops to be sent to Iraq was one of the most unpopular things John McCain could have done. Some said it was political suicide. But you know what?

It WAS THE RIGHT THING TO DO.

Because losing in Iraq would have been a nightmare for America. Al' Qaeda would have claimed victory over our nation. Sectarian violence would spread throughout the region. And Iran would fill the vacuum.

Last summer, we came within 2 votes of a congressionally mandated surrender. One Democrat broke with his party to support the surge.

It was John McCain's voice and credibility that stopped Congress from losing this war.

The Petraeus plan will be a model for generations to come, and our troops will be heroes for the ages.

Those who predicted failure, voted to cut off funding for our troops, and played politics with our national security will be footnotes in history.

There's no doubt about it, we are on the road to victory.

America is safer by winning in Iraq - A Muslim nation in the heart of the Arab world that rejects Al Qaeda.

A place in the Middle East where a woman can finally have a say about her children's future.

While Barack Obama expresses appreciation for our troops' service, he refuses to acknowledge their success.

They have worked too hard and sacrificed too much for a patronizing pat on the back.

Barack Obama went 2 and a half years between visits to Iraq and never once sat down with General Petraeus. If Barack Obama cannot appreciate that our troops are winning in Iraq, he should not be their Commander in Chief.

Not once was Barack Obama's eloquent voice ever raised in support of Victory in Iraq. Not once was it used to rally our troops in battle. Instead, he inspired those who supported retreat and would have accepted our defeat.

We should all be grateful that Barack Obama was unable to defeat the surge. The surge was a test for Barack Obama.

Our troops deserve a Commander in Chief who acknowledges their success. Has walked in their shoes. Speaks their language. Shares in their sufferings. And will lead them to victory in a war we cannot afford to lose.

That person is my dear friend John McCain.

John often says he would rather lose a campaign than lose a war. Here's the good news.

We are going to win this war.

And John McCain will be our next President of the United States.

But wait, it gets even better. Because John McCain has one of the toughest and most talented political reformers in America as his running mate.

Let's watch to learn more about the phenomenal Governor of Alaska, Sara Palin.

Thank you. Tonight I speak to you with a grateful heart and enormous pride.

I speak to you as one friend about another.

About a proven leader... a world statesman... an untiring and effective public servant. I speak to you about a warrior...who has sometimes stood alone... or shown the way... in fighting for the most vulnerable of our citizens... for the country he so dearly loves... and for the founding principles we all so deeply cherish.

I speak to you about a friend - who was first pointed out to me - in the same way he is proudly pointed out wherever he goes today - "That's John McCain."

John and I have been friends for 26 years.

Both of us got elected to Congress in 1982 and both of us are Vietnam veterans.

Some might say that is our common bond. For certainly the Vietnam experience is a uniting one.

But I would also say that our friendship blossomed over many a laugh as we told jokes that only we thought were funny.

Over many a moment boasting about our children.

And over many a conversation about our country and the world in which we both feel so privileged to live and to serve.

It was only a little more than a year ago - in August of 2007 - that I drove to John's office to offer an encouraging word.

You all remember that time.

It was really rough going for the campaign. Some were ready to count John out.

Some questioned his resolve.

Some wondered and waited for the white flag of surrender.

Having rehearsed my pep talk... I walked into John's office... put my arm around him... and asked, "Hey - how are you doing?"

He paused for a moment.

From his shoulders came a quick shrug.

Then he looked at me and said, "Tom, you and I both know I've been through worse."

He talked strategy... a way forward... next steps.

And later I would leave my friend's office thinking what I share with you tonight - "That's John McCain."

Where some people see adversity, John McCain accepts a challenge.

Where some people see a crisis, John McCain creates an opportunity.

John knows - the purpose of elections is not merely to win.

You run to win... but you win to govern.

So who of our two candidates is the most qualified to govern the freest, strongest, most blessed nation on Earth?

Who but John McCain has the experience... the sheer will... the steady hand... and the informed judgment to advance our economic and political interests during these perilous 21st century times? And who but John McCain - and only John McCain - can negotiate from a position of strength and proven ability - because he's already earned the trust... respect... and admiration of our friends and allies around the world? And I suspect he has the attention of those who would oppose us.

Now more than ever we need a leader who fits the times - not a candidate who merely thinks it's his time to lead.

For the consideration before us is not about who can take a 3 a.m. call.

It's about who has answered the call throughout his life.

It's not about building a record.

It's about having one.

It's not about talking pretty.

It's about talking straight.

The challenge of our times is not simply to change.

The challenge of our time is to leave nothing to chance.

More than 230-plus years ago, a group of leaders - some people called them mavericks - dared to think differently, dared to act boldly and dared to believe its future leaders would preserve, honor and protect the great land of the free.

Today - we have a leader - some people call him a maverick - who for his country, has put his life on the line.

Who for his country, leads with his conscience.

Who for his country, has worked to preserve, honor and protect the great land of the free.

John dares to think differently, to act boldly and to put country before self.

He dares to believe that we are all called to serve as long as we call ourselves free.

He dares to embrace the founding principle that our responsibility to one another extends from a national crisis to an individual need - from nation to nation - community to community - in this, the greatest community ever formed.

So may we rise to the occasion, to the moment, to the vision of our Founding Fathers.

May we summon ourselves to our best efforts and call this maverick forward.

Let us elect a man who has firmly and unequivocally laid out his vision of where this country can go.

Who offers a better way...a better day...and a greater say - for all who call this great country home.

An artful leader... a diplomat... a tenacious legislator.

Say it with me!

Someone who speaks truth to power, truth to the American people, and rises above politics to get things done.

A consensus builder, a reformer - the patriot who always puts his country first.

The next president of the United States.

God bless you all.

And may God continue to bless our brave troops who serve our country so well.