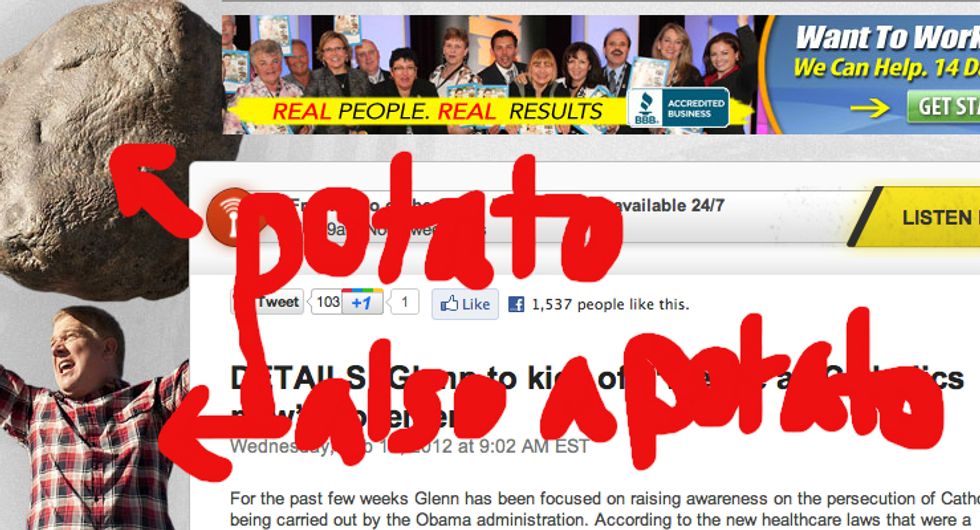 Baked potato-wielding beacon of strength and apparent modern-day Sisyphus Glenn Beck has gone symbolically Catholic, despite being a Mormon, in order to stand with freedom-loving Catholics over the contraception mandate that Obama is trying to affix to the health plans of companies affiliated with the Catholic Church. Amusingly, it looks like a great number of Actual Catholics actually support contraception mandates and/or the President, but nonetheless, the crazies are trying to get a freedom amendment attached to a bill that has to do with CARS! -- what? This government is stupid -- because it is the only way to get Obama to blindly sign on to freedom without realizing what he's doing despite the fact that the entire media is now spilling the details of this brilliant top-secret strategy. Beck also stole his new mantra -- "We are all Catholics now" -- from another utterer of words, Mike Huckabee.

Beck's poem against the "persecution of Catholics" (THINGS ARE SO HARD FOR CHRISTIANS) encourages his six supporters to get on the phone to their senators and tell them that they support a "Conscience Protection measure" being weaseled into a HIGHWAY bill by Roy Blunt, Republican from Missouri. Writes a Glenn Beck unpaid intern-slave:

According to the new healthcare laws that were a cornerstone of the Obama administration, employers affiliated with the Catholic Church will have to include free birth control in their health insurance plans, a mandate that runs contrary to both Catholic doctrine as well as religious freedoms granted by the Constitution.

So stand with your incense-shaking brethren in the Catholic Church and make a completely useless annoying call to the secretary of the secretary of the assistant of your senator, who is really a person in a call center in Sri Lanka. Beck says to recite the following script, more or less: "Hey, do you know how my person is voting on this? You don't? Oh, fine. That's OK. Can you call me back when you do? I AM CATHOLIC NOW. GOODBYE." Very convincing.

4. When you call, be sure to tell them “We are all Catholics now”. This key phrase will let them know you are part of a larger, organized movement working in support of religious freedom.

Terrible job, intern. Commenters on the site have responded with equally useless rants and raves like "this is still a beginning" (?) Inspiring stuff. [Talking Points Memo]