'Morning Joe' And Hyper-Feminist Mike Huckabee Having BIG FIGHT, And We Are HERE FOR IT 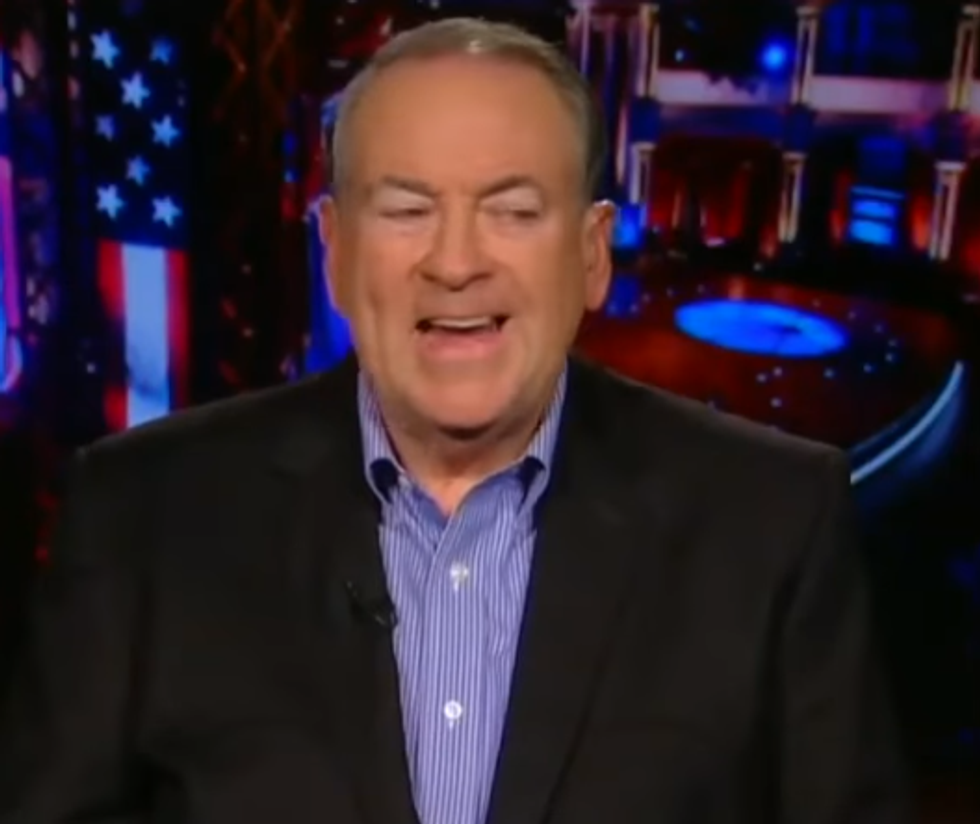 RUH ROH! Mike Huckabee, former governor of Arkansas, perpetually failed presidential candidate, and father to Press Secretary Sarah Huckabee "Poot Lips" Sanders, is Having A Upset! He saw that naughty Mika Brzezinski lady on the "Morning Joe" TV program, saying sexist things to his daughter like "DON'T LIE!" and "if you defend [Trump] for [calling Democratic Senator Kirsten Gillibrand an actual whore], YOU SHOULD RESIGN," and it gave him a righteous Arkansan Daddy Man Rage up inside his grundle! How dare Brzezinski hold his daughter to standards? What have non-Republican women been fighting for all this time if Poot Lips can't stand in the James S. Brady Briefing Room and tell America Bitches Be Lyin' about her boss, Donald Trump, the sexually predatory president of the United States?

Brzezinski also said Melania Trump's alleged "cyber-bullying" initiative is bullshit (it is, up until the day she deletes her husband's Twitter account), and that Melania 'n' Ivanka should go the fuck home if they're not willing to stand up for women in the face of President Pussgrab.

So Mike Huckabee put some leftover squirrel stew in the fridge for Momma and for his son what killed a dog that time, put on his coat, left the Hucka-Homestead, and marched right on up there to Fox News to COMPLAIN, COMPLAIN, COMPLAIN about the sexism being visited upon Our Lady Of The Most Blessed Poot Lips:

I was STUNNED that of all the people who were gonna give a lecture on morality and family and marriage, it's gonna be Mika? It's just stunning!

She didn't say fuck-all about anything like that, and Mike Huckabee knows it, unless he's dumber than he looks. (Impossible!) It was about Trump's disgusting tweet and how Poot Lips, a woman, stood up there and lied about it. But good try changing the subject for chairbound Fox viewers! Or as Brzezinski's co-host/man-lover Joe Scarborough said on Thursday (or "today"), "What a sleazy thing for [Mike Huckabee] to do. What a judgmental, predictably stupid thing to do." In other words, go fuck yourself, Mike Huckabee.

More fuckery from the Hucka-mouth:

And the fact is, when I read the tweet by the president, I did not see it as sexual innuendo! [...] The fact that some people read that tweet and immediately saw something sexual in it, says a whole lot more about the people who read it than it did about the president ...

Mike Huckabee, a dumbfucking pigstain who doesn't know things, is 'splaining us that Trump, a multiple-times-credibly accused sexual predator, didn't have his mind "in the gutter" when he tweeted that Kirsten Gillibrand is a whore. Ayup!

Now tell us about feminism, Huckashits:

I'll probably have to take half a baby aspirin tonight just to be able to get to sleep, because Mika Brzezinski attacked my daughter, who is one heck of a strong lady, a great mom, a lovely wife, and a terrific public servant ...

... and she deserves better from other women! And it just amazes me that even the women who say they're feminist are doing everything they can to discredit my daughter.

(Because she's a liar who lies to cover up her boss's abuse of women.)

Haven't we been through this recently, having to explain to poor dumb right-wing idiots who just learned the word "feminism," that it doesn't actually mean "Don't criticize a conservatives lady's words and deeds, because that's just uncouth?"

Such anger, many upset!

Thoughts and prayers for Mika Brzezinski, may she swiftly recover from the surely harrowing experience of getting mansplained feminism by Mike Huckabee.