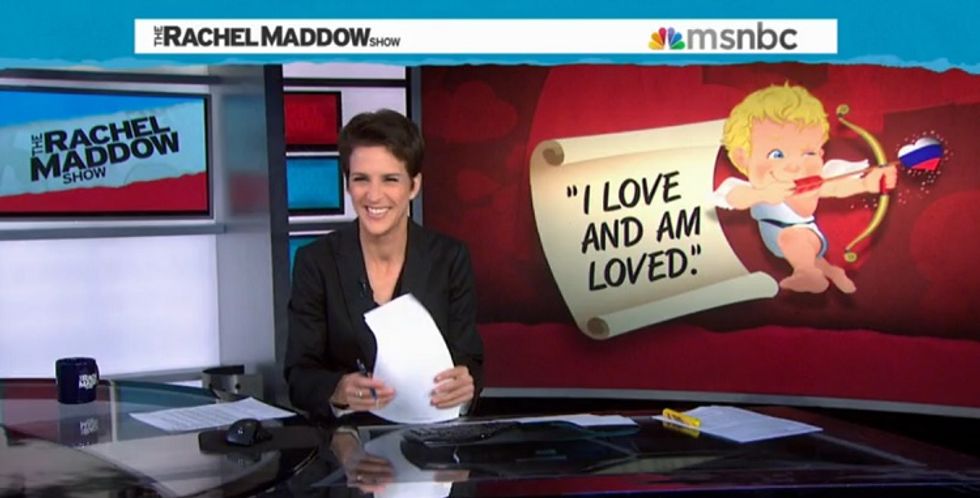 On Thursday's Rachel Maddow Show, we learned that Vladimir Putin is quite happy with how his life is going, telling the Russian press that, following his divorce earlier this year, "I have love in my life. I love and am loved." Isn't that sweet? And it turns out that he wasn't even talking about the guys at Fox News who have such a stiffy for his manly, take-charge style of governance, which they wish our mom-jeans-wearing wimp of a president would learn from (because then they could really accuse him of tyranny). Maddow delighted her liberal-arts graduate audience by wondering at the right's "strange love song for J. Alfred Putin." They sure do love themselves some "Mmmm, Vladimir!"

Kind of a bummer for the terrific take-charge manly leader: Nn the wake of Russia's invasion of Ukraine and annexation of Crimea, Putin's economy is sort of falling apart, thanks to the international economic sanctions orchestrated by the guy in mom jeans. Rachel has the nicest schadenfreude smile.

And before we get too smug, there's also an interview with former Ambassador to Russia Michael McFaul, who notes that if Russia tanks, that may not be such a great thing -- but there's some hope that the sanctions may actually be persuading Putin to make nice in Ukraine. Even if the geopolitics don't grab you, skip to the end of the video for one adorably goofy Rachel Maddow summations: "As sad as things are for Vladimir, though... He is loved."