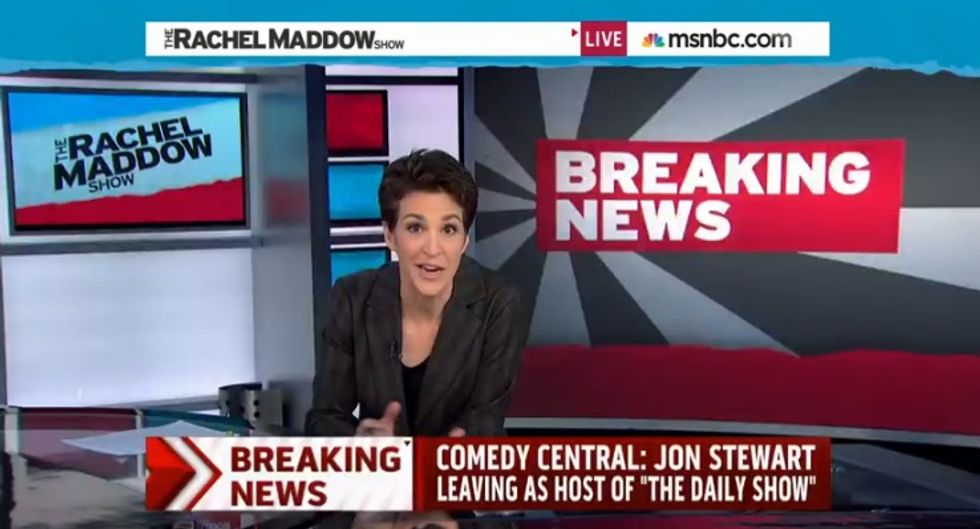 Tuesday night was just one big bucket of breaking media news, what with NBC news anchor Brian Williams getting suspended without pay for six months, effective immediately, and Jon Stewart announcing that he is leaving the Daily Show forever, effective eventually. Brian Williams has got to be feeling pretty darn lucky about the timing -- Maddow leads with his suspension, of course, but what people will be talking about is Stewart's departure. In fact, following her own show, Maddow went over to Lawrence O'Donnell's studio and sat in on the panel discussing the changes -- the Williams announcement got five or ten minutes, and the Stewart news took up the rest of the program.

Get ready for your Alex Jones conspiracy theory: Stewart actually colluded with Williams so that the Daily Show announcement would overshadow the news of Williams's suspension. And of course, it's all just a distraction from the government's plot to murder almost all of humanity and turn the rest into cyborgs.

And with their usual logic, the MSNBC web hobbits have split Rachel's "A" segment into three videos, with the Stewart announcement and interviews with New York Times media guy David Carr and New York Magazine's Chris Smith posted as separate videos:

And finally, an important update: Oregon continues to be weird this week, temporarily distracting from Florida. The City of Salem, Oregon, has named the attack owl in one of its parks: "Owl Capone." And the city has graciously accepted the Maddow Show's design for Owl Warning signs, which Rachel is entirely too happy about: