Morning Maddow: DuPont Plant Knows Nothing About Its Own Toxic Leak Except That It's Safe (Video) 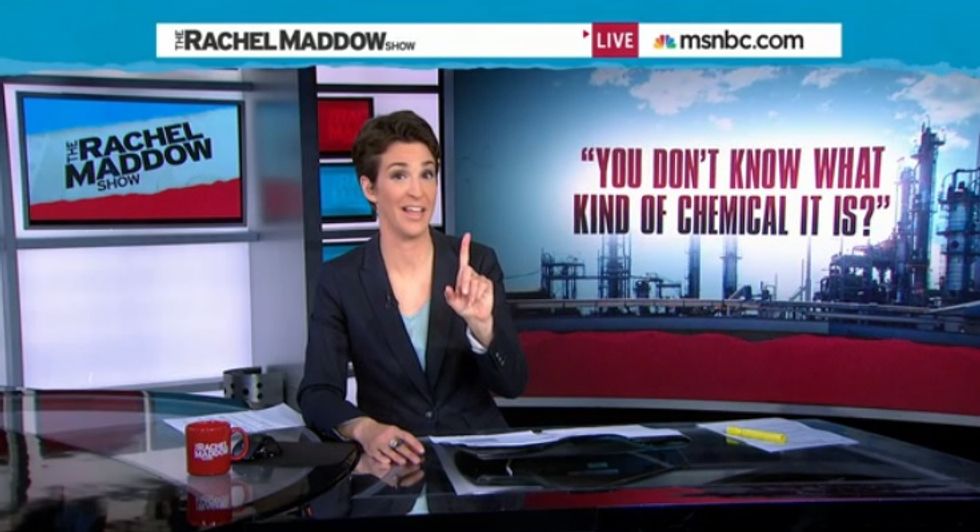 Rachel Maddow starts off this segment with a bit of history: Texas just love industry, and sees no reason why a lot of unnecessary government regulations should get in the way of profits. Oh sure, sometimes a fertilizer plant blows up and kills 15 people, but they chose to live near/work at a fertilizer plant, didn't they? But Texas doesn't go in for regulations like industrial fire codes (Texas has none), or chemical plant inspections (purely voluntary), or even requiring that companies publicly disclose what chemicals they produce or store. On that one, Texas Attorney General Generagl Greg Abbott said that if people really care that much, they can just drive around town and ask chemical plants what potentially lethal materials they have on hand. He's governor-elect now.

So maybe we shouldn't be terribly surprised to learn that over the weekend, when a DuPont plant in LaPorte, about 25 miles out of Houston, started leaking chemicals that killed four workers, the plant supervisor who called 911 at 4 in the morning wasn't entirely sure what the chemical was, nor could he give the 911 dispatcher any information about the nature of the leak that might be useful to the firefighters who showed up.

Once firefighters got inside the plant, they had to turn back because their equipment was inadequate to protect them from exposure. Ultimately, it was hours before the bodies of the workers could be recovered. And the site is still too toxic for investigators to get to, days later. On the up side, despite not knowing much of anything about the nature of the leak, the supervisor was at least able to confidently say that there was no risk to the public.

Forget it, Rachel. It's Texastown.