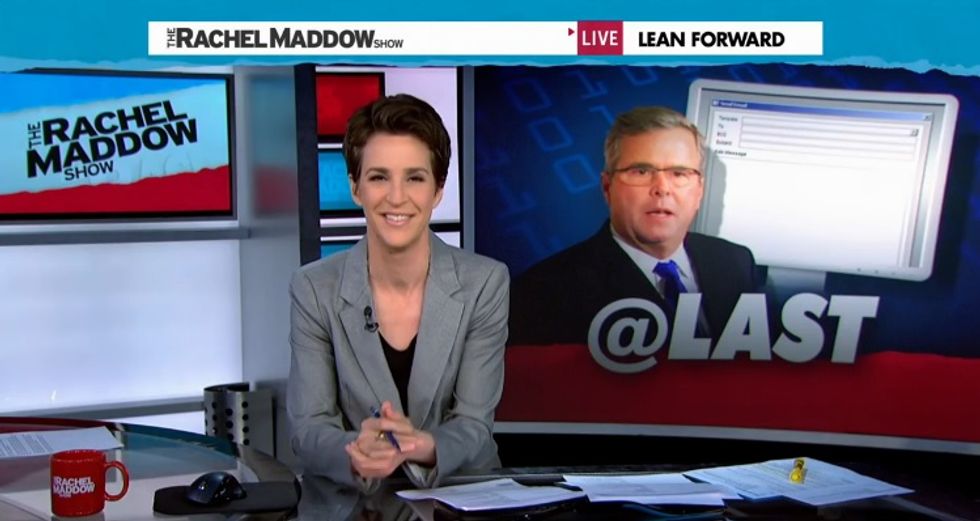 Rachel Maddow loves the Bush family almost as much as we do. Especially their talent for putting their foot in it, as President George H.W. Bush did when he seemed amazed by a supermarket scanner during his 1992 reelection campaign. Supposedly, he was amazed not by the scanner itself, but by its advanced features, like being able to read torn labels, but mostly, she says, it just looked like he was unfamiliar with the "fundamental basics of peasant life, like how you pay for stuff at the store."

So to distinguish himself from his rich goofy (some might even say evil, though Rachel's too nice) family, Jeb "The Smart One" Bush is trying to brand himself as the "techie Bush," noting that some even called him the "eGovernor." Especially when he reminded them to, we bet.

Hard to do that, Rachel notes, when two burly gay bears from Oregon already own "JebBushForPresident.com" -- but nevertheless, Jeb launched his very own website this week, JebBushEmails.com, hyping it like anything, and it's all about his amazing record of being In Touch With The People, through the amazing modern technology of the email.

He released an amazing trove of email correspondence with constituents from his time as governor of Florida -- and, whoops, that includes all sorts of constituents' private data, unredacted. Names, email and physical addresses, phone numbers, Social Security numbers. Bush explained it was OK, though, since those emails were "public information" that anyone could have acquired through an open records address. But his not-quite-campaign just blasted it all out on the web, and eventually started removing the worst privacy violations.

And then there's the complete dickhole they hired as head tech guy, Ethan Czahor, who had a legacy of embarrassing sexist, racist social media. Oops. But at least that guy didn't reveal anyone's personal information. Except for that one time when his company did, long ago. That guy's gone now.

So the Bush campaign, which is still undeclared, is off to a pretty impressive start. Jeb can even imitate modem noises!

Also too, for fun, here's Rachel's take on Scot Walker in London, deciding he'd "punt" on the fairly basic question of whether evolution is real science. Either Republican candidates have to stop visiting London, or their advance teams need to be smarter than British journos.