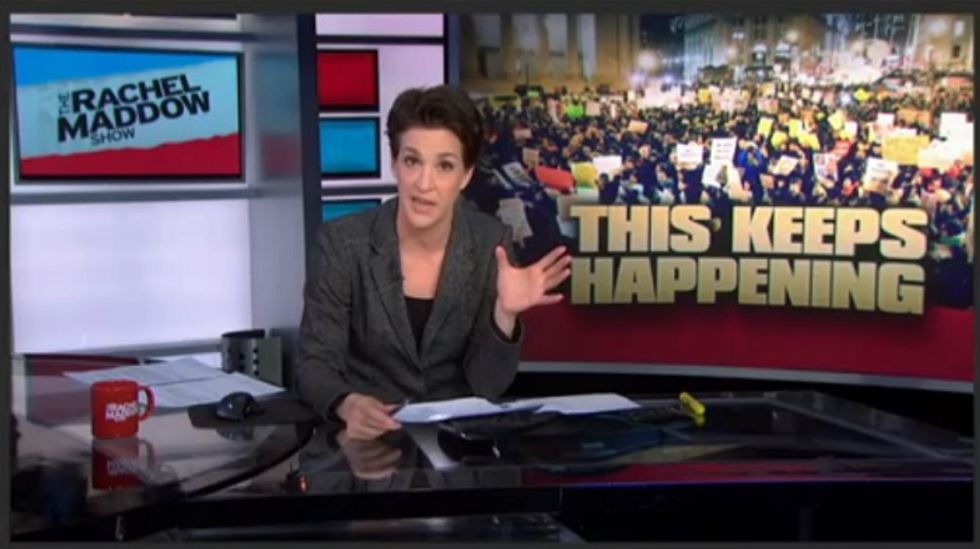 Rachel Maddow led off Thursday's broadcast with a review of just how terrible the police are in Cleveland, Ohio. How terrible? Very. Very, very terrible.

The Justice Department released a report Thursday on the policing madness in that city, along with an agreement to put a federal monitor in place to clean up the police department -- for the second time in a decade. There's almost too much bad police behavior to wrap your head around, and the investigation wrapped up before the recent police shooting of 12-year-old Tamir Rice.

There's the car chase from 2012, in which over 60 cop cars chased a vehicle at high speeds and eventually killed the unarmed driver and passenger, with 13 cops firing 137 shots to accomplish the deed.

And yes, there's more on the officers involved in the shooting of Rice. We learned that Tim Loehmann, the cop who did the shooting, was determined to be irremediably incompetent at the small-town department where he worked before moving on to Cleveland. And now we learn that the driver of the patrol car, Frank Garmback, was involved in a bizarre 2010 assault of a woman who had called police for help but who ended up being tackled and beaten by Garmback last year. She received a $100,000 settlement this year.

And finally, a conversation with Pulitzer Prize-winning columnist Connie Schultz, about the prospects for Cleveland and its police department finally getting their shit together (we may be paraphrasing a bit). Schultz has the best single line we've seen of the killing of Tamir Rice: "On Wednesday, hundreds of mourners prayed for a boy who should not have died at the hands of a man who apparently should never have been a Cleveland cop." And Rachel nails it at the end of the interview: these killings by police aren't inevitable. They're failures of training and failures of governance.