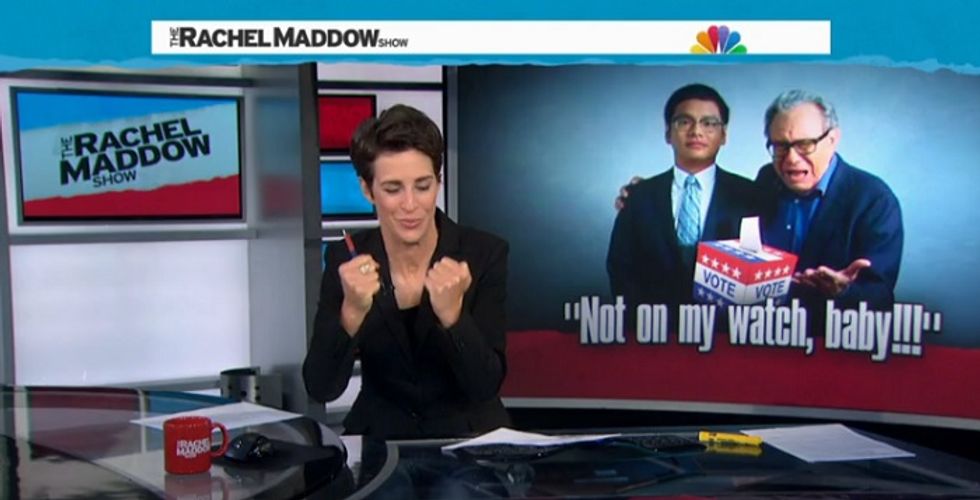 Rachel Maddow lucked into some good timing for this piece on Voter ID laws and other restrictions on voting. While her show was on the air Thursday, the Supreme Court blocked Wisconsin's clustercoitus of an ID law, and a federal court also blocked a similar law in Texas. So at least a couple of states will be letting everyone vote, at least for now, although the Supremes also gave the OK to North Carolina's terrible voter restrictions, probably the worst in the nation. Apparently North Carolina's law is fine because unlike Wisconsin, they put it in place before voting actually started.

So yes, timely. Also timely, the Government Accountability Office just released a major report quantifying what everyone pretty much knew about Voter ID laws: They result in lower voter turnout among legal, eligible, registered voters -- particularly younger voters and black voters, who just happen to lean Democratic. In other words, just as the laws were designed to do. Says Maddow,

If we were less polite about these things, we would call it what it is, which is cheating. It's using political power to change the rules to make it harder for specific people to vote, so Republicans have a better chance of staying in power ... And if you care about small-d democracy and the right to vote and everything that went into securing it, it's enough to make you swear.

You know who else is mad enough to swear? Lewis Black, who's now starring in an ACLU campaign to raise awareness of voting restrictions. He's pissed, and he's wonderful, and the ACLU's video is included in this Maddow clip.