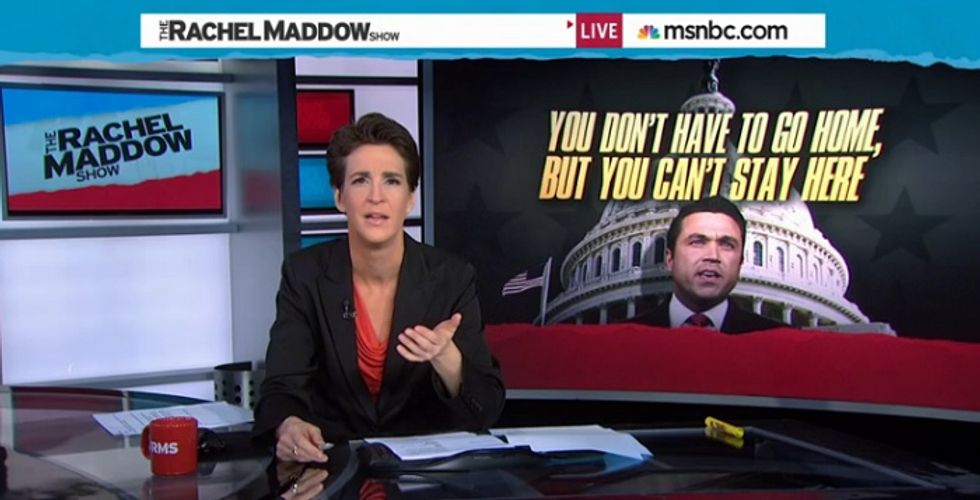 Tuesday's Rachel Maddow Show started off with a brief review of crimers in Congress. It's not as long a list as you might think! She focuses on California Republican Jay Kim, who was convicted of campaign fraud in 1998 and became the first -- and so far, only -- member of Congress who walked its hallowed halls wearing a monitoring bracelet attached to his ankle. Kim's estranged wife said he was "the most crime-committing person I know." He lost his primary that year and soon became the footnote he was destined to be.

Actual felons in Congress are something of a rarity, Maddow notes, because of a reassuring human tendency to eventually do the right thing -- either the convicted Congressturds resign or the voters pick someone else. Which brings us to New York's Michael Grimm, who pleaded guilty to a felony tax fraud charge Tuesday, but also said he will not resign. As for the voters, they re-elected him last month, even though he had a 20-count indictment against him. And now, please enjoy several minutes of Rachel Maddow repeatedly noting that there's no actual law precluding felons from serving in Congress, and the man is apparently completely bereft of decency.

As a matter of fact, it's a two-parter: In the second video, Rachel explores the options Congress has for dealing with a convicted felon who won't resign and who has successfully gotten himself reelected for a brand new term.