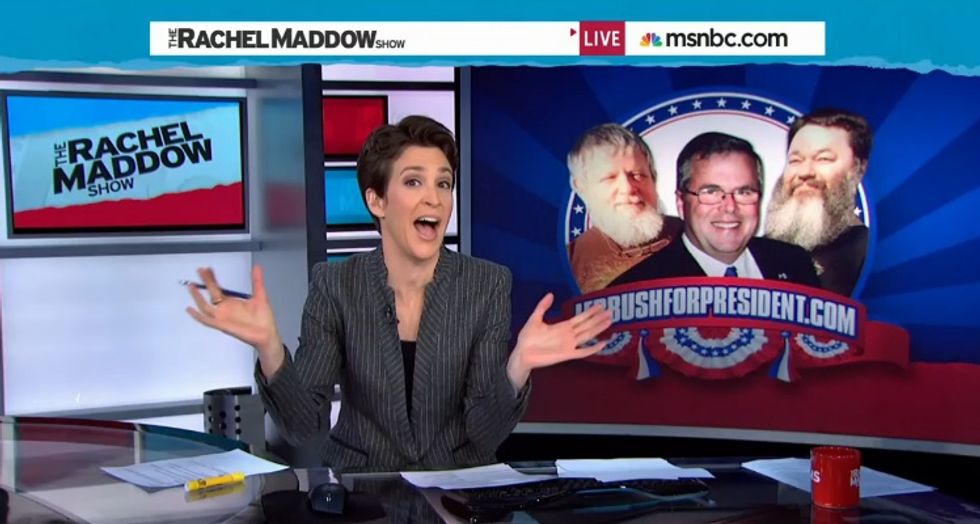 Rachel Maddow brought us some updates Monday to her story last week about the serious outbreak of weird in Oregon. First, as she'd hoped, Rachel scored an interview with C.J. Phillips and Charlie Rainwater, a Portland couple who describe themselves as "high-tech bears," and they tell her all about their plans for the website JebBushForPresident.com, which is not actually promoting the former Florida governor's candidacy, but rather, invites gay and straight Americans to "have a chat, share viewpoints, maybe realize that the person you felt you could never have anything in common with is actually dealing with exactly the same issues." They're ridiculously sweet guys. And while the domain name isn't for sale, they do have a backup, just in case: CJandCharlieForPresident.com.

Also, too, that owl what's been terrorizing people in a park in Salem is back, at least in CGI form on Rachel's desk, and the surgeon who was its first hat-thieving, scalp-piercing victim has sent in a pic of himself wearing the Maddow Show's owl-warning sign (he's the one with the wild hair):

And the local paper is of course having a contest to name the owl. We like "Thurston Owl III." Winner will be announced Tuesday afternoon.

And finally, in keeping with the show's apparent zoological theme, here is video of Eric Holder refusing to quack like a duck for Melissa Harris-Perry: