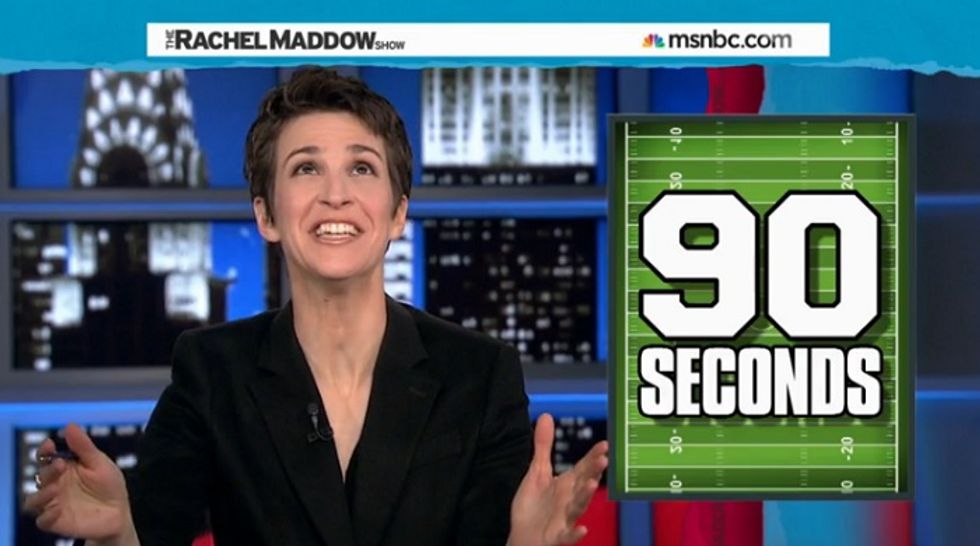 Rachel Maddow goes all Mythbusters in this segment on the under-inflated foot-the-ball scandal, testing out the hypothesis that a New England Patriots employee may have done something nasty to the footballs in a stadium restroom.

With the help of TRMS web producer Will Femia, Rachel tests whether it is indeed possible for one man to deflate 11 footballs by exactly 2 PSI in just 90 seconds, which is just one theory of the crime.

We won't spoil the results -- not that Rachel cares about them because as a Bostonian, she's already certain the Patriots are innocent. But this is cable TV investigative time-killing at its finest.

Shockingly edited from the MSNBC video is the very end of the segment, Maddow's handoff to Lawrence O'Donnell, in which O'Donnell said, "Now I've seen everything: The Rachel Maddow Show playing with balls in men's rooms."

"Yeah," Rachel replied, "You wouldn't expect it from everything you've heard about this show, would you?"

Thank goodness for DVRs, so we could bring you the exact quote.