Morning Maddow: Remember When That 'Reporter' Yelled At Obama About Immigration? (Video) 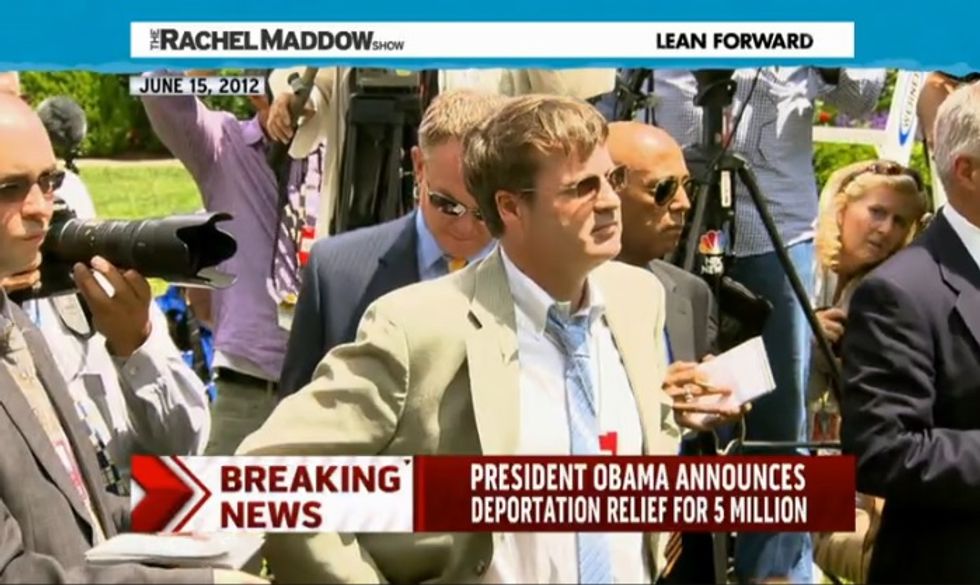 To kick off her recap of how Barack Obama shredded the Constitution for the 165th time, Rachel Maddow reminds us of that exciting moment in 2012 when Barry was announcing his Deferred Action for Childhood Arrivals (DACA) executive order, and while he was speaking, some moron who works at Tucker Carlson's website started yelling at him. It was a pretty special moment that seems emblematic of the Spirit of the Age -- or as our Jim Newell said at the time, "Pure bad faith, baby, that’s how we roll in the Greatest Country In The History Of The World these days."

And yet, somehow, the sky didn't fall. The guy from Tucker Carlson's website became a rightwing hero, but the DACA kids were protected from deportation (rumors of them all being drug mules with thighs the size of cantaloupes notwithstanding), Barry got reelected, the GOP decided immigration reform might be a good idea and even helped pass a bill in the Senate, and Sean Hannity of all people said he'd "evolved" to accept that some kind of path to legal status was needed, because we can't simply deport everyone. "He has since unevolved," Maddow notes. But after that, it was more fun for Republicans to do absolutely nothing but yell at Obama, and that's a big part of how we got to last night. Enjoy a mini history lesson, kids -- there will be shouting:

Also, for fun, here's one of the prickliest interviews we've ever seen Rachel do, with former G.W. Bush communications director Nicolle Wallace. Even though Wallace and the president she worked for were in favor of something similar to what Obama announced Thursday, that plan, too, was shot down by GOP right-wingers, (who today might be called "moderates"). Rachel just can't help herself -- whenever Wallace tries to stake out some common ground between her kind of Republicans and reform-minded Dems, Maddow won't quite let her sing Kumbayah. She keeps reminding Wallace that her party has a lot of nutjobs who won't do a damn thing on immigration. It stays cordial, but there's also just a bit of needling. It's fun.