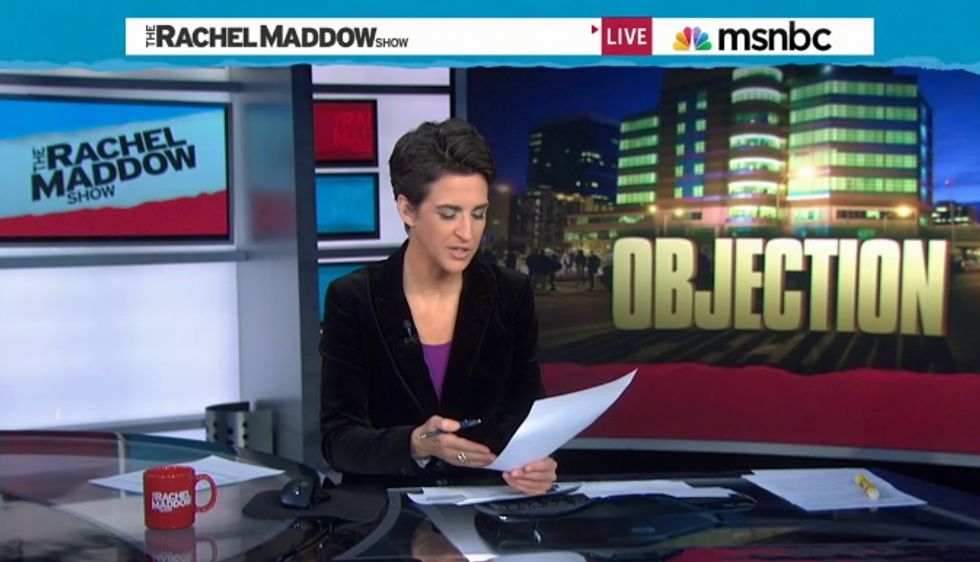 Hey, you know how the Grand Jury in Ferguson, Missouri, completely exonerated Darren Wilson for all time and declared his killing of Michael Brown perfectly valid? Rachel Maddow had a surprising little fact for us Tuesday: The grand jury had been given instructions about the Missouri law governing when it's legal for a cop to shoot a fleeing suspect -- but that law had been invalidated by a 1985 Supreme Court decision (Maddow is building on an excellent piece on this last week by MSNBC's Lawrence O'Donnell).

For most of the grand jury's term, they were operating under instructions from an assistant district attorney that their decisions should be governed by a 1979 law -- the one that was found unconstitutional in 1985 -- that said it was legal for police to shoot a fleeing suspect. And then, on the very last day of the grand jury, that same assistant DA handed them an updated version of the legal instructions, explaining that the first instructions were a little incorrect, but without specifying what was wrong with them, even when one juror asked a question to clarify whether Supreme Court decisions invalidated Missouri laws.

The assistant DA response? "As far as you need to know, just don't worry about that." The other county prosecutor jumped in, adding, "We don't want to get into a law class."

Don't worry your pretty little grand jury heads about what the law actually says. Just hurry up and determine that Officer Wilson did nothing wrong. And clearly current constitutional law does not apply when a defenseless cop is being viciously charged by a "demon" teenager.

Prepare to be disgusted. Had similarly inaccurate legal guidance been given to a real trial jury, this stupidity would never stand. As it is, get ready for it to be dismissed as sour grapes from the liberal media, because as we all know, Darren Wilson was proven completely innocent, by a jury and everything.

And here's O'Donnell's original report, just in case you find you haven't ground your teeth quite enough this morning: