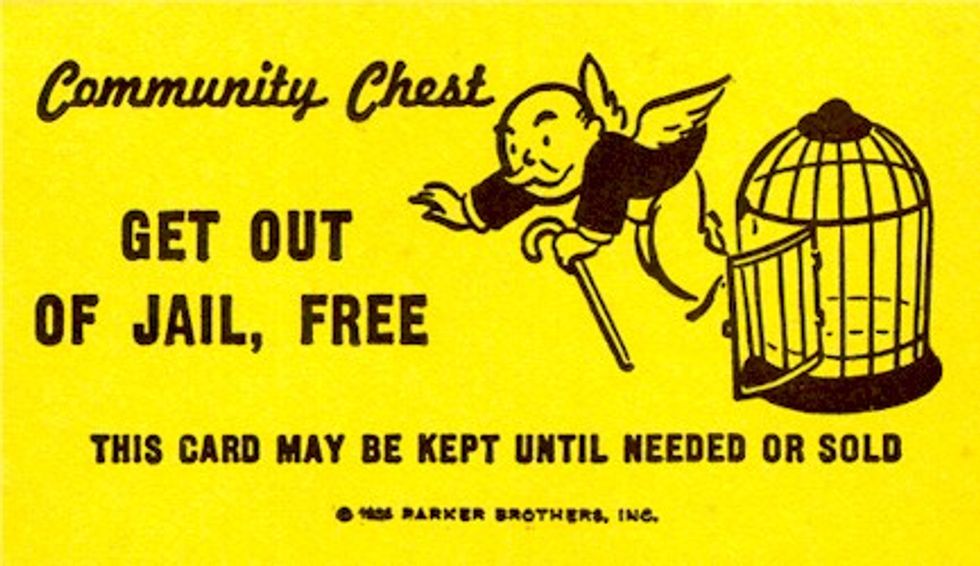 Also, just for laughs, Judge Howard Shore (but not his all-nurse band) decided Olson's defense attorney could not mention the First Amendment because "The State's Vandalism Statute does not mention First Amendment rights." And yet somehow, Jeff Olson was acquitted on all counts Monday afternoon -- he is just lucky this guy wasn't on the jury -- so here is your Nice Time!

Turns out that blogospherians weren't the only people annoyed by Olson's apparently being selectively targeted for prosecution. San Diego mayor Bob Filner "called the case 'stupid' and a 'waste of money,'" according to the LA Times:

"It's chalk," Filner told reporters last week in an exasperated tone. "It's water-soluble chalk. They were political slogans."

A spokesman for City Attorney Jan Goldsmith’s office was unimpressed by the argument that the mean statements were easily washable:

Graffiti remains vandalism in the state of California,” said Michael Giorgino, spokesman for Goldsmith. “Under the law, there is no First Amendment right to deface property, even if the writing is easily removed, whether the message is aimed at banks or any other person or group.

As the San Diego Reader notes, the city doesn't seem to treat all chalktivism (can we say that? It's pretty awful) as vandalism; in 2011, an anti-abortion group checked with San Diego police before chalking up sidewalks in front of several Planned Parenthood clinics, and posted on their Facebook page that "it is NOT considered vandalism to chalk up a sidewalk." They later posted photos of their brazen sidewalk-defacery. Then again, 2011 was a long time ago, and perhaps the city has reconsidered the seriousness of the threat posed by chalk.

In any case, Olson's fears of maybe going to prison for years have been erased, like some kind of impermanent image applied to a flat surface and then sprayed with a pressurized liquid of some sort. We're sure there's a metaphor in there, maybe.

Spokespersons from Bank of America were reportedly too busy swimming in a giant lake of money to comment.