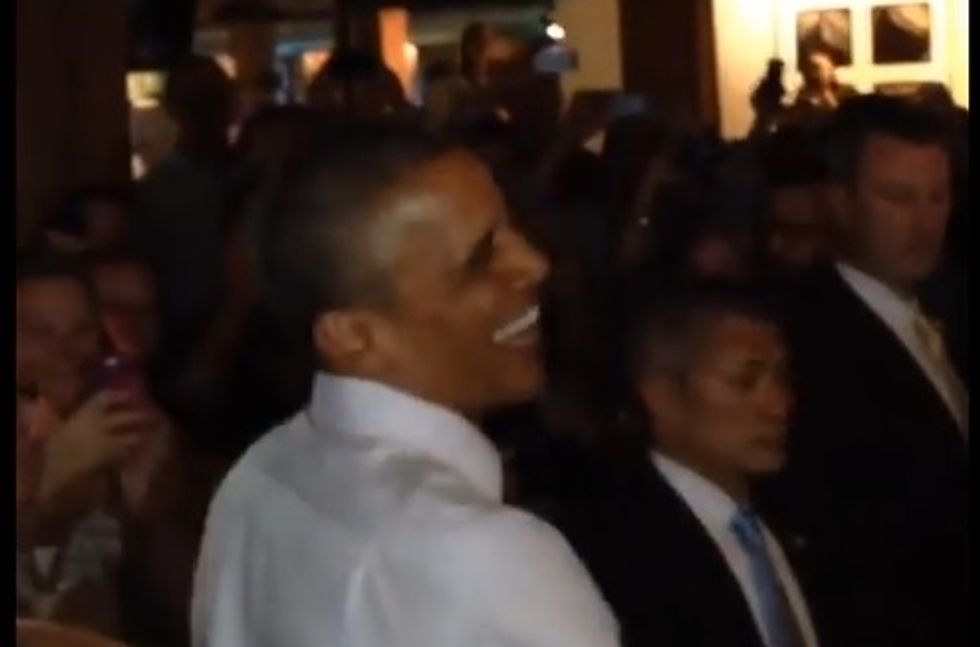 The Imperial King of the Formerly United States, Barack Hussein Marie Antoinette Louis XVI Obama, arrogantly forced a pregnant woman to wait to cross the street to a hospital while his motorcade passed in Los Angeles Wednesday. Needless to say, the Wingnuttosphere was all over the story, because it's just one more symptom of how THAT MAN thinks he is better than the rest of us. You can bet that the motorcade would have come to a screeching halt if the lady had "looked like Obama's son."

The unidentified woman was delayed for something like 30 minutes before she could cross the street to Cedars Sinai Medical Center, according to Carrie Clifford, a witness who spoke to Glenn Beck's The Blaze.

“I felt bad for her,” Clifford said. “It does happen when Obama comes to L.A. or I’m sure anywhere else. It paralyzes the city, it does make it complicated.”

“You can’t do the things you had set out to do because the president is in town,” she added.

Over at Ghost Breitbart's Refuge For The Easily Upset, John Hayward reached for the smelling couch, clutched his salts, and griped about the Imperial Presidency:

I would imagine the woman who went into labor in Los Angeles, but had to wait across the street from the hospital while His Majesty's mighty motorcade rolled past en route to his next big-bucks fundraiser, is probably tired of the "bear is loose" crap too [...]

Obama's imperial retinue shuts down entire cities when he bails on his Presidential duties and holds Democrat fundraisers, where he gets to bask in the adulation of the last few people on Earth who don't care that he's fiddling while the world burns down. Luckily for him, those people are super-rich.

The super-rich are just the worst, aren't they? Maybe they should be taxed or something.

At Tucker Carlson's Internet Café For Borderline Sociopaths, Jim Treacher called the delay of a woman in labor "a new low, even for Uncle Sam," and explained,

Sorry, lady, but King Barry had yet another fundraiser to attend. You should’ve thought of that before you decided to punish yourself with a baby.

That Barack Obama -- he obviously schedules his motorcades to go through right when a pregnant lady needs to cross a street. He uses the NSA. He does this because he hates babies. In fact, he's probably going to sic the IRS on this lady since she didn't have an abortion like he wanted.

As of Thursday morning, the woman, who successfully crossed the street after the motorcade passed, had not yet given birth. Probably because she was traumatized. Guess we know which party is behind the REAL War on Women.

Yr Wonkette was never a fan of George W. Bush, but we don't recall any similar outcries over the inevitable traffic delays caused by his motorcades -- beyond the usual griping that goes with Presidential retinues since at least the 1980s or so. St Elsewhere dedicated an entire episode (with Betty White!) to the disruptions caused by a brief visit to Boston by the First Lady (unnamed, but it woulda been Nancy Reagan). But apparently Barack Obama is different -- his motorcades are actually fueled by spite for everyday Americans.

The Secret Service told the Los Angeles NBC affiliate that the incident was under investigation by LAPD and issued a statement saying,

"The Secret Service works closely with state and local police counterparts in planning for and conducting motorcade movements of our protectees. It is always our policy to prepare for and facilitate medical emergencies, medical flights, ambulances etc. in the fastest and safest way possible."

Congratulations to Secret Service spokesman Brian Leary for not closing with, "For fuck's sake."