Move Over Donkey-Riding Jesus, This Pastor Needs A Falcon 7-X To Preach The Good News! 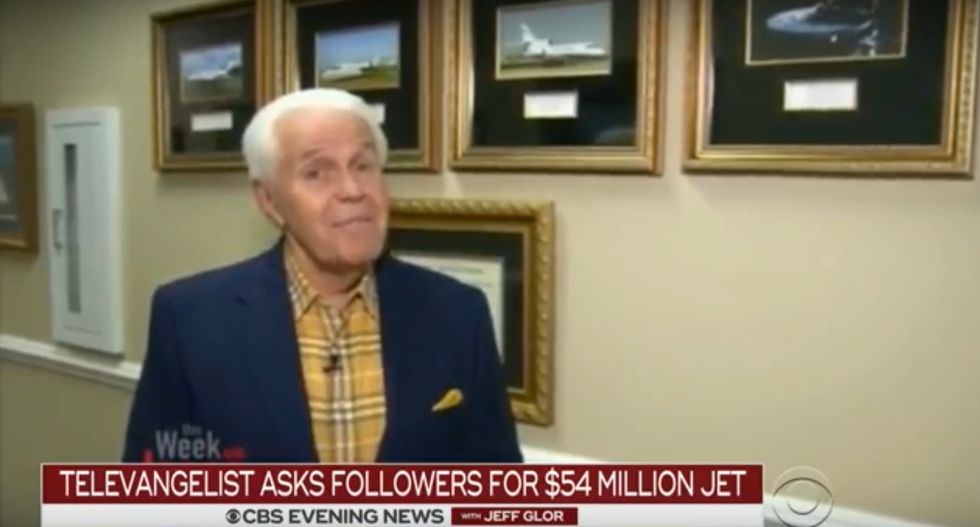 What extraordinary machine does one pastor need to spread the message of Jesus in this world of sin, greed, and vice? According to one greedy ass televangelist, he needs a super expensive ass plane, and yes, he wants his followers to pay for his newest message-spreading machine. Apparently Jesus just wasn’t doing a damn thing right when he sat his barefoot, poverty-stricken ass on a donkey and slowly took to the dusty trails of the Holy Land spreading the Love of Christ. He needed a jet plane. And not just a regular, run of the mill passenger plane where he could cram himself in between a bingo hall grandmother and a commercial fisherman from Kotzebue. No, indeed. What he needed was a set the skies blazing, hot sexy painted harlot of a jet plane: the muthafucking Falcon 7-X. Yaaas bitches!

According to Jesse Duplantis, televangelist for the “Jesse Duplantis” ministries, Jesus wouldn’t waste his precious time submitting to the indignity of riding a sweaty ass donkey, “He’d be on an airplane preaching the gospel all over the world.” Right? I mean, it’s not like Jesus was a supernatural being who could presumably do shit that Jesse’s little peabrain could never contemplate, in Jesse’s mind, Jesus was EXACTLY the same person as Jesse.

The Washington Post expands upon this ultra important point:

Why would He choose anything less than the Falcon 7X, a private jet that nears the sound barrier but also has noise-limiting acoustic technology, a Bluetooth-enabled entertainment center and an optional in-flight shower?

Why indeed? I mean, Jesus must like Bluetooth-enabled entertainment centers, and who doesn’t want to take a luxurious shower after having only 10 minutes to get to the Delta boarding gate that you have to take a fucking train to get to at the airport in Seattle? And sound barriers? Jesus likes to go FAST, just like Jesse and Ricky Bobby.

Now, please prepare yourself for the shock of a lifetime. Ready? This is not the first time this Pastor of Privilege has asked his parishioners to pony up millions upon millions of dollars to buy a new plane to “help” Duplantis spread “The Gospel.” He actually already has three planes that were supposedly going to help him do the difficult job of spreading Christ’s love.

Duplantis is very aware that many are critics of his desperate need for a brand new set of wings when the ones he already has are working just fine. To those who say, “Hi, your planes work just fine. Use the ones you already conned your flock out of," Jesse has an irritating and self serving response. Basically, this plane is BETTER!

Watch "this Week with Jesse" as Jesse shows the importance of using aviation as an amazing tool for evangelizing the world! Tune in each Monday at https://t.co/hnG6BhPAvH or on our JDM App. Click to watch https://t.co/PLfSYt2A3Upic.twitter.com/sAvKskmokO

Now people say … can’t you go with this one? Yes, but I can’t go it one stop. And if I can do it one stop, I can fly it for a lot cheaper, because I have my own fuel farm. And that’s what’s been a blessing of the Lord.

And you guys were thinking he was simply a mercenary, greedy fuck! Shame on you! He’s just trying to SAVE MONEY by getting people to buy him a $54,000,000 jet plane! It costs sooooo much more money to make two stops when you could just fly anywhere in the world non-stop. HE HAS HIS OWN FUEL FARM!! It’s just economics and stuff maybe. He has obviously calculated the costs and has decided that it is worth it to have other people pay for him to have this level of luxury. Doesn’t that make you feel bad for being all judgmental? No, he’s full of shit? Yeah.

Duplantis and other “Prosperity Gospel” pastors like Creflo Dollar have been making headlines in recent years by demanding that the faithful open up their pocketbooks to help them obtain “Gulfstreams for God” and other highly expensive items. And if you don’t know anything about Prosperity Gospel, it can be summed up very easily; you bless the pastor with your money, and somehow God blesses you with money. Yes, it sounds exactly like a Pyramid scheme, except nobody makes any profit except the guy on top. And no, God is not at the top of the pyramid waiting to “make it rain” big dollars on the little guy at the bottom. It’s was scam, it is a scam, and it will always be a scam. And they'll never, ever stop doing it. Witness!

Can't stop won't stop! Till they're burning in hell.

Click here to donate now. We promise not to buy any jet planes.