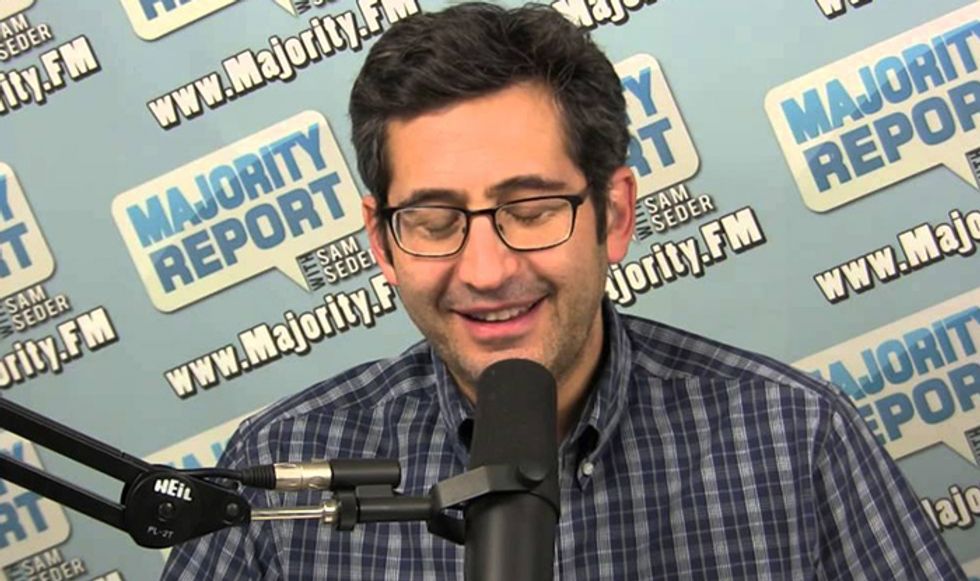 A small win for sarcasm

MSNBC corrected its monumental ratfuckup of a few days ago and announced it would reverse its decision to fire Sam Seder over a tweet that satirized people who supported Roman Polanski. In 2009, Seder was pissed off at people petitioning for Polanski to be forgiven for his rape of a 13-year-old girl in the 1970s, so he tweeted this sarcastic message aimed at Polanski's defenders:

Usually 'I was JOKING' is a terrible defense. But in this case, the joke was aimed at a worthy target and those pretending to be offended are evil.

Fascist-lite Twitter asshole Mike Cernovich is one of the top advocates of the #pizzagate hoax and an evil snollygoster who makes funny jokes about how rape is no big deal ("joking," "on the square," to in honor of Al Franken); he saw an opportunity to do some ratfucking, so he started a fake outrage campaign asking why MSNBC would allow a man who "endorses Polanski's sex crimes" on its broadcasts. On Monday, MSNBC sacked Seder, because it is run by morons.

The Internet was Not Pleased, and MSNBC was roundly condemned for being stupid and getting hoodwinked by a ratfucking campaign, and apparently the network decided to come to its senses and offer Seder his job back. Seder accepted, and offered this statement on the whole wretched mess:

I appreciate MSNBC’s thoughtful reconsideration and willingness to understand the cynical motives of those who intentionally misrepresented my tweet for their own toxic, political purposes. We are experiencing an important and long overdue moment of empowerment for the victims of sexual assault and of reckoning for their perpetrators. I’m proud that MSNBC and its staff have set a clear example of the need to get it right.

For its part, MSNBC was sort of, somewhat, contrite, and admitted it had blown it big-time in firing Seder. MSNBC president Phil Griffin said it was a case of meaning well but not thinking well:

Sometimes you just get one wrong [...] and that’s what happened here. We made our initial decision for the right reasons -- because we don’t consider rape to be a funny topic to be joked about. But we’ve heard the feedback, and we understand the point Sam was trying to make in that tweet was actually in line with our values, even though the language was not. Sam will be welcome on our air going forward.

Well how big of them. The thousands of people who signed petitions and sent emails to the cable network probably helped get the point across, too.

Seder told WaPo's Erik Wemple that he had no hard feelings toward the cable executives, since they're neither sharp enough to have recognized the 2009 tweet was sarcasm, nor cynical enough to recognize the naked bad faith of Cernovich and his little online helpers:

“To a certain extent MSNBC got duped in part because you know, this is a new era and it’s hard for people to wrap their heads around what a guy like Cernovich does,” says Seder. “Had Cernovich called me, my attitude would have been different.”

On Twitter today, Cernovich was busy proclaiming Flawless Victory. The Nazi-adjacent waste of perfectly good molecules boasted he had simultaneously forced the lamestream media to admit that it fired a guy over a baseless complaint, AND that MSNBC was definitely defending child rape jokes. We think he may be doing the "sarcasm" thing right now!

Mike Cernovich doesn't look like a lying sack of shit, the MEDIA looks like a lying sack of shit that also endorses crude jokes about child rape, shame on them. And whenever the media tries to make someone look bad just because they made perfectly innocent jokes about rape -- like Cernovich has -- he will remind those media outlets of the time he lied so brilliantly about Seder, to teach them their lesson.

This man is truly playing 11-dimensional Candyland, that's for sure. And he's pretty sure Hillary's pedophile ring is under the gumdrop house, even if it doesn't actually have a basement.