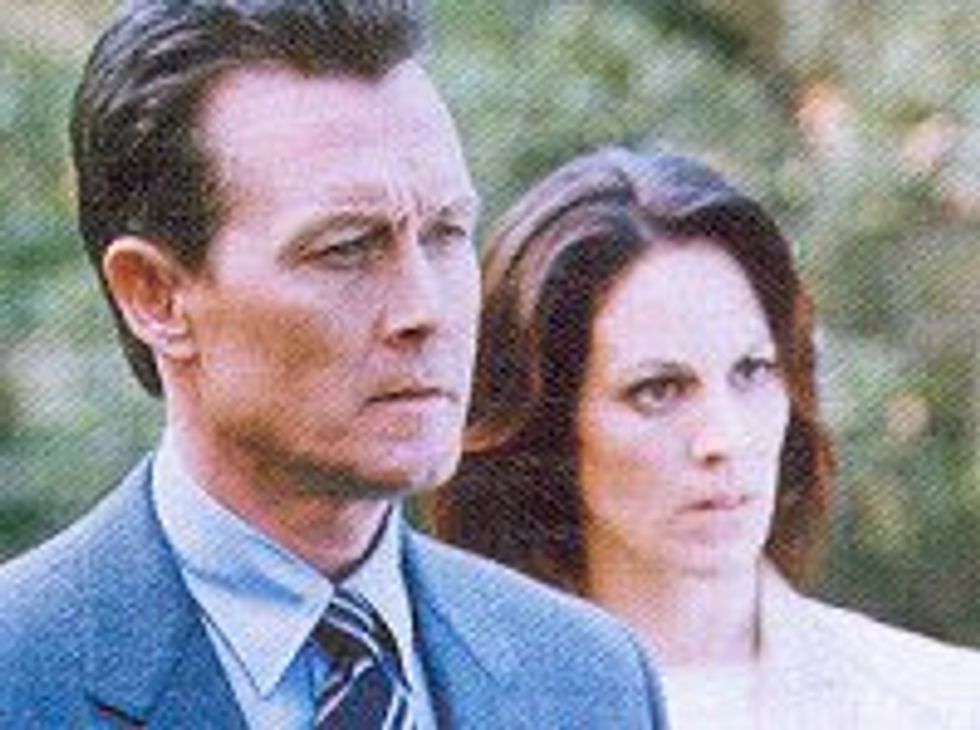 A long time ago in the 1990s there was this teevee program called The X-Files -- a creepy mix of Nixon-era political conspiracy, the occult, fake terror attacks, FEMA killing everybody, and Space Demons. It seemed completely fantastic until 2001, when Dick Cheney and George W. Bush began their reign of horror. And finally, after years of silence, the creators of the X-Files are talking about how this administration stole all their ideas, even 9/11!

What noble purpose encouraged the show's writers to discuss the American Evil hatched from their innocent teevee drama? There's a new X-Files movie coming out this summer, that's what! It will feature FBI agents Robocop & Whatzherface boring the fuck out of everybody for two years. Ha ha, just kidding. Maybe.

Anyway, Variety asked these people about the bizarre "coincidences" between the X-Files, its short-lived 2001 spin-off The Lone Gunmen, and why Condi Rice is such a terrible liar. This is because the pilot episode of The Lone Gunmen is about corrupt Defense contractors and evil government officials flying a passenger jet into the World Trade Center so they can blame it on terrorists and start a lucrative series of anti-terror wars to boost defense-sector profits in the post-Cold War era. This was shown in May 2001 on FOX, and it got such terrible ratings that nobody noticed it was about 9/11, which happened a few months later:

The show was also pretty awful. But still, Condi lies!

Littleton brings up the "Lone Gunman" connection to 9/11 and a member of the panel mentions this might be the first time they've ever really talked about it. How did they react to the terrorist attacks having dramatized a very similar scenario just six months prior?

"It was freaky, and one of the weirdest things is no one really asked us about it," Carter says. "It had been imagined before, by many others."

"It made me angry," Spotnitz says. "It was not unimaginable. My first thought was ... 'Oh my god, I hope they weren't copycatting the Lone Gunman, which they weren't. My next thought was: 'Why weren't we prepared for this?' "

So we were wondering what other stories from the X-Files have also inspired the Bush Administration, and came up with the following:

X-Files:FEMA blows up its own high-rise in Texas to hide some kind of alien plot.

Bush Administration: FEMA blows up the levees in New Orleans so the black people will go to Texas.

X-Files: A terrible "fluke worm man" is created in some sinister Government Laboratory and unleashed upon the public.

Bush Administration: Terrible anthrax is created in some sinister Government Laboratory and unleashed upon Democratic legislators and TV anchormen.