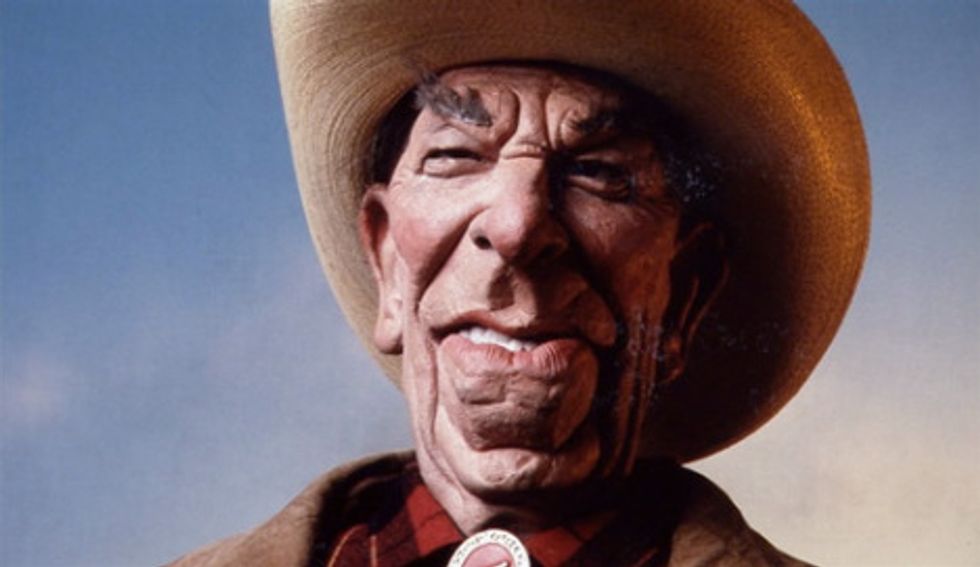 Sun's out guns out, Staten Island! Behold Saint Ronald of the Rippling Biceps, Vanquisher of Russia and Crusher of Pull-Up Sets, conveniently located next to A Vape Lounge, where all the cool kids are vaping right now and you're not even invited.

So this is a mural, and it's made by a man named Scott LoBaido, who really goes all-in on the AMERICA LOVE IT OR LEAVE IT thing. Here is a [sic]'d word slurry from Scott LoBaido's website about his very favorite art he ever drawed:

His greatest creative accomplishment thus far was “Flags across America” where he drove across the United States, in 10 months, and painted a large American flag on one rooftop in each of the 50 states. His goal was to ensure that all soldiers flying home from war would look down and see an American Flag greeting them home … Scott’s mission was to make sure that the soldiers knew how grateful we all are for their service to this great country, and to acknowledge the families of these great men and women, and of coarse express his pride in being a free American.

And if you're thinking, "Phew, I am not a trashy Staten Islander; this stuff might as well be in Montana," THINK AGAIN, because Muscle Reagan is going to liberate Queens Boulevard soon.

The giant Reagan will remain on Staten Island for a week, then LoBaido plans to hang up the mural in various spots around the city. The next spot for Reagan will be Queens Boulevard, LoBaido said.

Now, let us trust but verify: Scott LoBaido believes Dead But Obviously In Heaven Reagan has really packed on the muscle mass. Does Ghost Reagan use the steroids? We are not sure. Perhaps Reagan's combination of mass and definition is indeed the result of hard work at the gym and a life devoted to baked chicken and steamed broccoli. Perhaps they are the result of artistic license maybe, but would artistic license not also be a troubling sign of liberalism, which is a well-known brain disease? Seems fishy, "Scott."

The artist made the digital collage using one of his flag paintings and added cut-and-paste images of the former president on top.

Ha ha, Scott LoBaido cannot even draw Ronald Reagan's face from memory! Here, Scott, this is what Ronald Reagan looked like before you glued his head onto the body of a bouncer from some bar near Rockaway:

The Ghost of Conservatism Yet to Come has also revealed to us that Reagan got ink'd up in Heaven. He's got a sweet tat of an anchor and the words, "The Gipper," because that is who he was once, in a movie, and while the movie has nothing to do with the sea or boats or anchors, still, cool anchor! Muscle Reagan does not have a tattoo related to trading missiles for hostages and using the proceeds to fund Latin American death squads, which LoBaido describes as "some baggage" that, he insists, "all presidents" have.