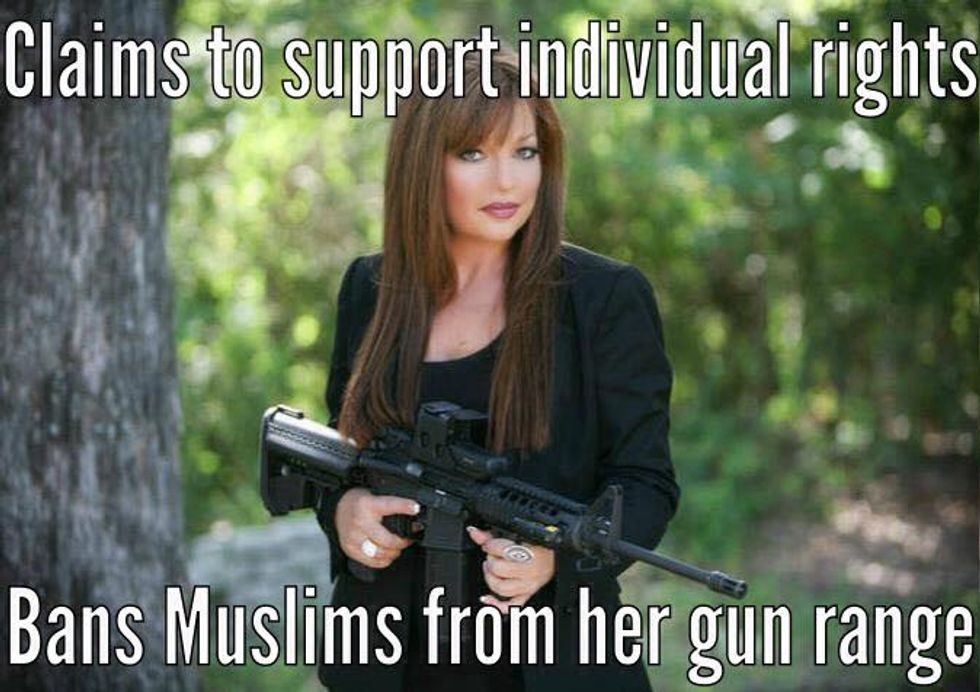 America isn't for just everybody, silly

Let's say you're preparing a cable TV news segment on fears that radical Muslim terrorists might sneak into America among the 10,000 Syrian refugees President Obama has agreed to accept. (We'll leave aside what a pathetically small number of people that is, for the richest nation on earth.) Who would you interview to offer some insight on that question? Maybe someone from the State Department who could explain the screening process? Maybe a security expert who might point out that homegrown terrorists pose a greater threat and that the 9/11 hijackers arrived on tourist visas? If you're Fox News, of course, you don't actually want information on the real risk, which is next to nil; you want to stroke your viewers' fears. So you invite Jan Morgan, the Muslim-hating bigot from Hot Springs, Arkansas, who started a lucrative wingnut trend last year when she declared her gun range a "Muslim-free Zone" in the middle of the Great Oklahoma Decapitation Panic. Obviously, this is someone who knows a lot about refugees!

On Monday's edition of Fox Business's puckishly named "Intelligence Report with Trish Regan," Ms. Morgan was invited to share her thoughts about whether it's a good idea for the USA to help even a tiny number of the several hundred thousand Syrians who have fled that country's civil war. She expertly explained, as a person who has first-hand experience being terrified of Muslims all the time, that President Obama has clearly handed the nation over to Terrorism, Inc.: "This is not a humanitarian hand that President Obama is extending, it is an open door to an enemy invasion."

Morgan offered some scary fact-like claims: her certainty that "the FBI has documented that there are ISIS jihadists located now in every single state" (which isn't exactly what the FBI said, but who cares about details?), and the irrefutable Fox News "fact" that "81 percent of mosques in America are advancing or promoting violence," so it only makes sense that Islam as a whole should be "declassified as a religion and reclassified as a terrorist organization" because its holy book advocates violence. (Needless to say, the Bible's occasional calls for genocide aren't a problem.) This must have been a pretty exciting experience for Fox viewers, who got the rare treat of seeing another Fox News viewer using Fox News claims to provide some perspective to a Fox News host.

Not that it was a softball interview at all! Host Trish Regan had some tough questions for Morgan, like asking her about the heavy burden of keeping America safe through religious discrimination:

You have to worry about guns getting into the hands of the wrong people, so when you look at the idea of President Obama bringing 10,000 refugees in, many of whom could be extreme Muslims, that worries you, yes?

Not surprisingly, that does worry Morgan -- not only for her own sake, but also for all the Americans who'll have to have these dirty Syrians, most of them proven members of ISIS, living among them.

Regan also had to correct herself at least once when she called Morgan's gun range a "business," quickly changing that to "club," because Morgan has taken to claiming that the public accommodations clause of the 1964 Civil Rights Act doesn't apply to her business, since it's really a private club now: Everyone pays a membership fee, and she doesn't have to follow Big Government's dumb laws no more. We'd love to see her defend that in court.

In any case, Morgan says, at least there's one thing that can keep us safe from the 10,000 Syrian refugees who face a two-year screening process before being relocated to YOUR NEIGHBORHOOD and then activated as Killing Machines:

Thank God! Thank God, Trish, in America, unlike the other countries who are taking these refugees, I thank God that we have our Second Amendment, and our citizens have a right to bear arms to defend life. So at least we have that edge.

Fox Business then went to commercial and presented a story about funding priorities for NASA, based on an interview with a teenager who has seen The Last Starfighter 58 times.