Muslim-Hatin' Rep. Steve King Sure There's No Discrimination Against Muslims 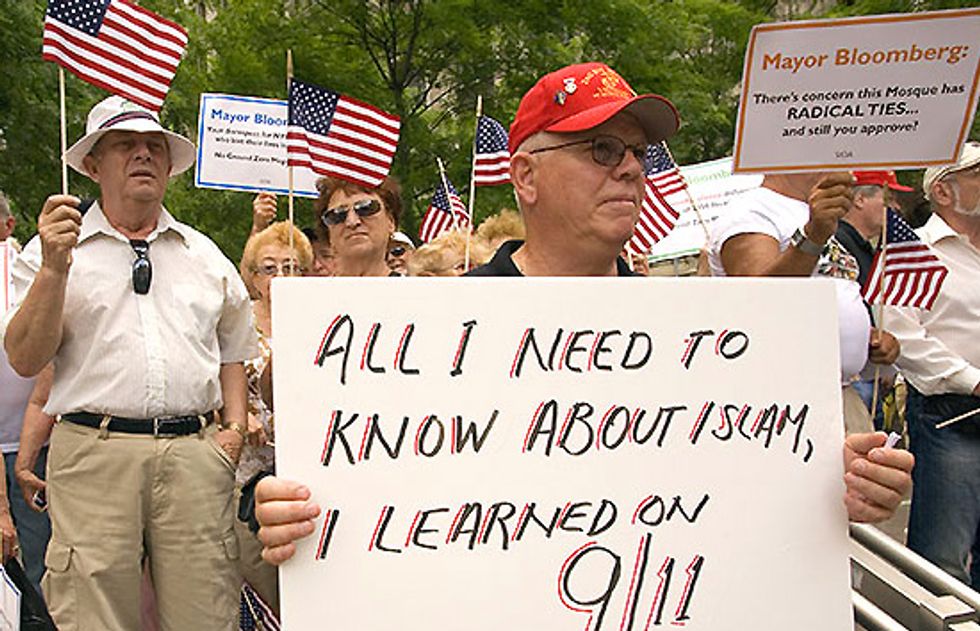 Iowa congressprick Steve "No I'm not the Novelist" King is disgusted -- disgusted! -- at the warped priorities of Homeland Security Secretary Jeh Johnson, who said in February that he would "give voice to the plight of Muslims living in this country and the discrimination that they face.” King thinks that's a pretty weird thing to say, since, as far as Steve King knows, Muslim-Americans simply don't face any discrimination.

King offered his unique views on the civil rights scene in an interview Wednesday with Iowa radio podcaster Jan Mickelson, who's apparently a vital pipeline for rightwing stupid this week. Mickelson played a brief clip of Johnson's comments, and asked King:

King was astonished, outraged, and horrified, because probably this means Johnson was pledging only to protect Muslims, who don't even need protection in U.S. America:

This is just appalling to think that the man who’s in charge of protecting Americans domestically would take a position like that, Jan.

King noted the absolutely true fact that "not all Muslims are Taliban, but all Taliban are Muslims," and then added that while not all white people are in the KKK, all KKK members are white (or think they are). We are kidding, of course -- group guilt is only for Muslims! And he even acknowledged that there are "peaceful people of all stripes out there." Even some peaceful Muslims, he supposes! That seems awfully open-minded of him, really; if he ever runs for president, expect that audio to get him in trouble for being too accommodating to the invading Muslim Hordes. But Jeh Johnson is ignoring the real victims in America: Christians, whom the president keeps blaming for the Crusades all the time, and also Christians who aren't in America but are also not being protected by that hypocrite Jeh Johnson:

The president can dredge up his Crusader history and try to leverage that back against us to guilt us,

but what’s this discrimination that’s going on against Muslims in this country? I’m not seeing it. I mean, they’re beheading Christians on the shores of the Mediterranean Sea, and some people are speaking ill of that component. So where are the moderate Muslims speaking up?

Yeah, Jeh Johnson, why would you even have mentioned discrimination against Muslims on Feb. 18, exactly a week after three Muslim students were murdered in Chapel Hill, North Carolina, by a neighbor? (Yes, deleted commenters, we know -- even though the case is still open, everyone knows the murders were only about parking, and nothing else.) We can't think of a single reason he'd want to mention anti-Muslim discrimination, which doesn't exist at all.

It's not like anyone's out there burning down mosques, claiming that Muslims have no religious freedom, trying to stop mosques from opening, declaring their businesses "Muslim-free zones," or beating up Muslims at random, after all. The real victims of discrimination in America are Christians, even if no examples come to mind at the moment.

Where does Jeh Johnson get the silly idea that Muslims are discriminated against? And where are the moderate Muslims, so we can burn down their houses?