Muslim Restaurant Declares War On Christmas By Offering Free Meals To Homeless, Elderly. What Are They Up To???? 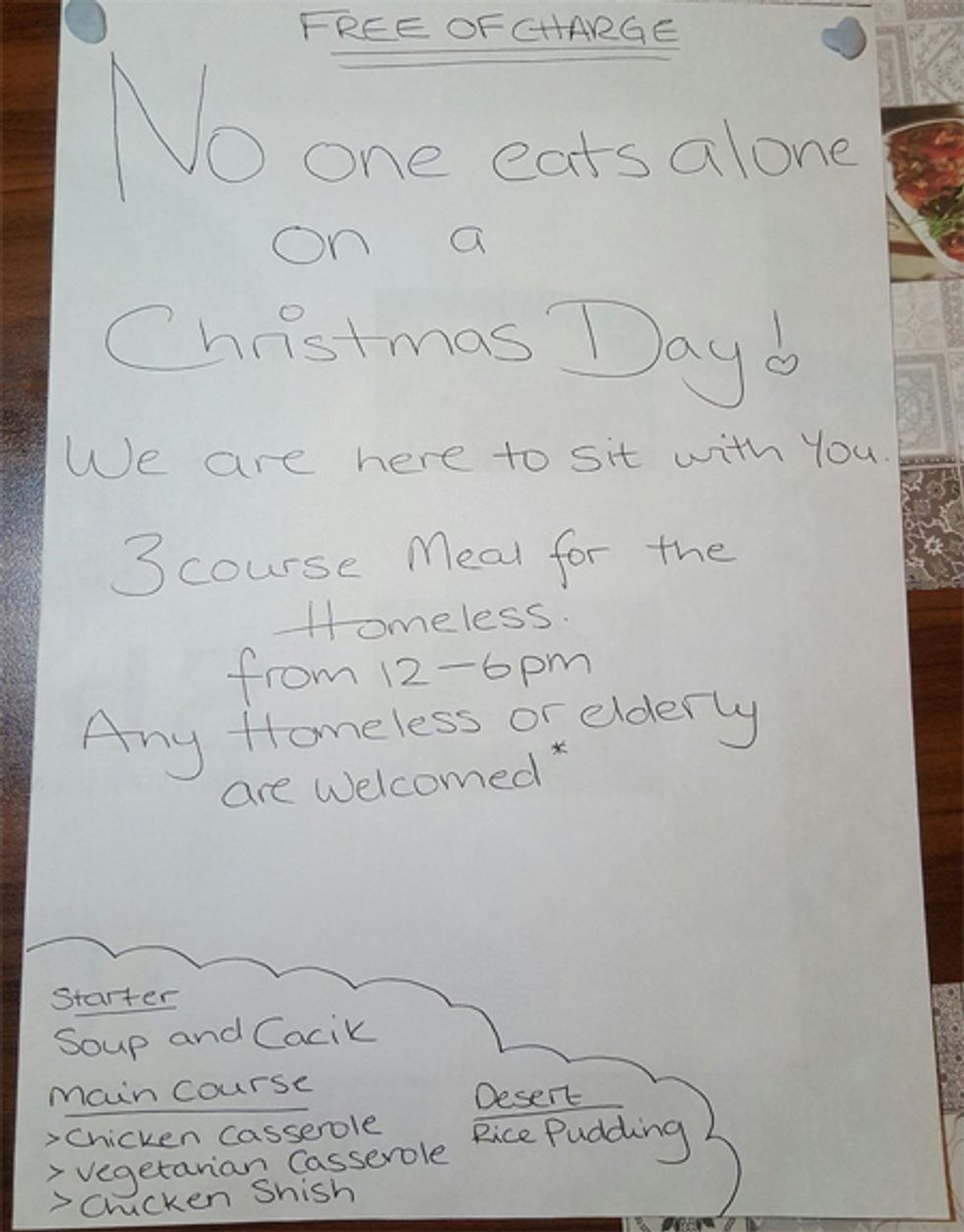 A Muslim-owned Turkish restaurant in London is preparing to serve free three-course meals for Christmas to the homeless and the elderly, saying "nobody will eat alone" on Christmas Day. It's a very sweet example of interfaith outreach, just as long as you don't read the comments on CNN's Tweet about the story, which will leave you longing for a touch of the Christmas cheer displayed by Mr. Potter in It's A Wonderful Life.

But this is a Nice Time post, so we will focus on the Nice in this story, which started when an elderly woman who lives near the restaurant, called Shish (the restaurant, not the woman), came in one day in November and asked if anyone there could help her close a window she couldn't quite reach. Someone from the Shish staff (say that three times fast!) went with her to help, and the next day, she dropped by Shish again to thank them all. While she was there, she mentioned that she'd be alone for Christmas.

Her situation reminded owner Serdar Kigili of his mother in Turkey, whom he hadn't seen in five years. The management team then came up with the plan.

The team first advertised on the restaurant's front window with a hand-written note: "No one eats alone on a Christmas Day! We are here to sit with you. 3 course meal for the homeless from 12-6pm. Any homeless or elderly are welcomed."

Never underestimate the power of a sentimental son or daughter as a force for good. Yes, if you want to think about Barry Fitzgerald being reunited with his tiny ancient Irish mama while the boys' choir sings “Too-ra-loo-ra-loo-ra” on Christmas Eve at the end of Going My Way, feel free to do so. If you're too young for the reference, please substitute "Ohana means family. Family means nobody gets left behind." That works just fine.

The restaurant tweeted the offer to let people know there was a place to go where they wouldn't have to be alone on Christmas, the tweet went viral, and at least 25 neighbors have volunteered to help out with the expected crowd. Taxi drivers have also volunteered to ferry people from outside the neighborhood to the restaurant if they need a ride.

The approximately 66-seat space will be open all day, serving starters of soup and cacik, a yoghurt-based dip and mains of chicken, vegetarian casserole or chicken shish. Traditional rice pudding will be offered as dessert.

One of the restaurant's managers, Irfan Can Genc, told CNN, "It's not about religion, language or culture. It's about community," adding that he hoped other restaurants would offer similar holiday gestures of giving as well.

Commenters on CNN's twitter feed accused the network of selectively trying to make Muslims seem like good, moral people, while deliberately ignoring all the churches and Christian-owned establishments that help the homeless all the time, so there. And indeed, there are lots of terrific Christians who do wonderful things to live their faith, thereby negating any good things Muslims might do for their communities. Heck, some of those Christians even manage to feed the homeless without being shut down by angry competitors who don't want their parking lot full of bums or without getting arrested when city officials think the homeless are too unsightly to deserve feeding.

God Bless Us, Every One.