Muslims Condemn Terrorism, Get Southern Hospitality Texas-Style (It Is A Bad Style) 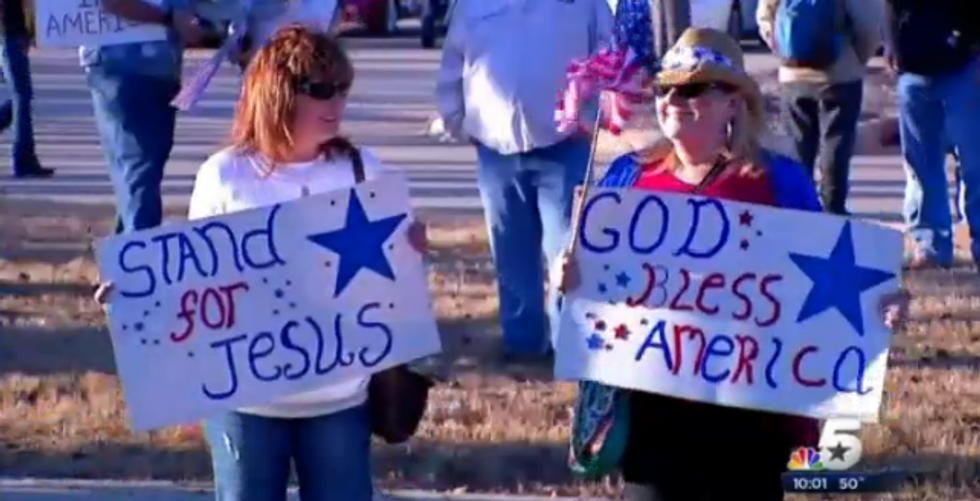 You'd think Real 'Mericans who are always complaining about how Muslims won't Condemn Terrorism would be very happy when Muslims come together to Condemn Terrorism. Just kidding, thinking that would make you A Idiot.

Over the weekend, Muslims gathered at a conference in Garland, Texas, to "Stand With the Prophet Against Terror and Hate." They were waving American flags, saying inflammatory things like "Thank you, America," and condemning violence carried out in the name of Islam. So radical!

One charming fellow explained that he was protesting outside the school for, that's right, America!

"We’re here to stand up for the American way of life," he said, "from a faction of people that are trying to destroy it." Sure, those people he's protesting are there for pretty much the same reason -- to condemn that faction trying to destroy the American way of life. So you'd think maybe he'd be grateful for the group's presence. Or not. "If they want to live their life like the Middle East," he continued, "they can go back to the Middle East." Guess Texas doesn't abide by the Southern Hospitality rule.

This one real nice lady holding a "God Bless America" sign doesn't either. "We pay our taxes to that school," she said, "and I don’t want them here." That's nice. Godly too. Probably what Jesus would say.