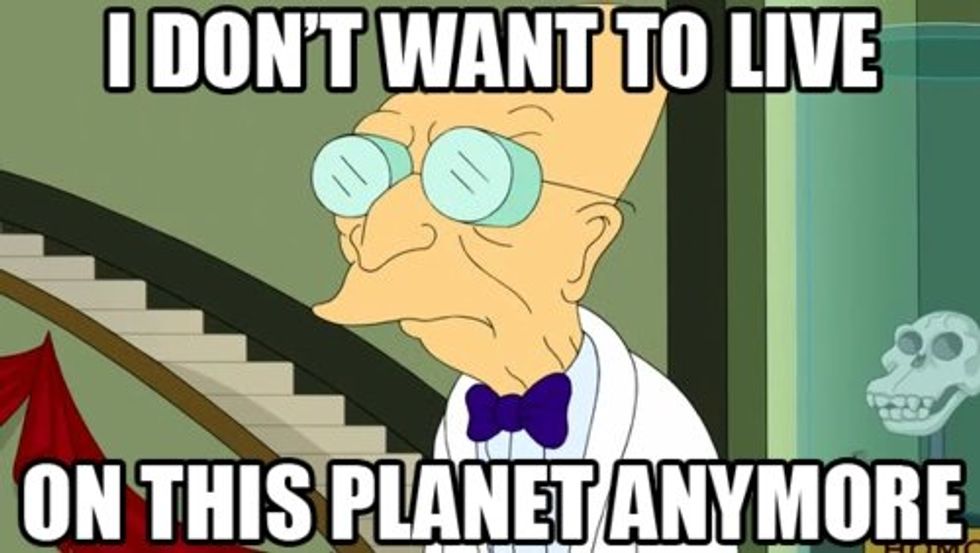 Well, dear Wonketteers, Kid Zoom has had his carefree teen life disrupted by a new source: religious people imposing their ideas on others. I am sick and tired of people assuming that critical thinking is a virus, and injecting their vaccine of religion to keep this disease out of our schools once and for all. And unfortunately, in the great state of Idaho, this train of thought is literally as common as drunken mountain men taking a bath in hot springs. And drunken mountain men taking a bath in hot springs is not a "colorful metaphor." It is an Actual Thing, one which I have been personally subjected to on two different camping trips.

First of all -- and I am pretty sure that this is an Idaho thing -- all biology teachers seem to be extremely religious. This is not surprising, considering the well known fact that Idaho is a breeding ground for redneck, gun-fondling, evangelist, backwater, God-botherers. I have had experiences with two that fit the bill.

The first taught at a junior high school that my friend went to. The Stoopid was strong with this one. His religiosity continued to get in the way of his profession, as he literally refused to teach evolution as fact. He openly mocked his own course material. Apparently, when teaching the evolution unit, he showed extremely compelling evidence, connected that evidence to evolution, and then announced that despite the evidence, the evolutionary cake is a lie. (And as I type these words, I can literally hear the sound of John T. Scopes turning in his grave.) The only reason he had the job was because he brought his own taxidermy, for like most Idahoans, he was a gun-fondling hunting addict. Your Wonkette’s Teen Kolumnist will not be winning the “Potato Pride Prize,” Idaho’s highest honor, anytime soon.

The second teacher gave his entire class a quiz, told them to take it home, and listed one reason and one reason alone for them not cheating on it, which was that GOD WILL SEE YOU NAUGHTY KIDS AND HE WILL BE MAD OH YES HE WILL! Unfortunately, he made one simple mistake in employing this tactic: he forgot that he was NOT, in fact, a nun, and not teaching at a Catholic school, and so, of course, mere guilt trips stopped absolutely nobody.

Religion is not THAT bad, until it is force fed to children with the intent of creating a pious foie gras. Unfortunately, unlike geese, force-feeding induces nausea and vomiting in people, along with bitter hatred and resentment. Sometimes it manifests itself by losing the faith, other times it causes them to puke their religion all over everyone in sight. These people not only get on my nerves, they literally jump on my nerves like a shrieking 5 year old on a trampoline. (Literally!) It turns out that teachers are not the only ones trying to indoctrinate convert students, as other students have done so too.

There are people that will literally, and this time it is ACTUALLY literal, state that any discussion of ethics, morality, etc. is irrelevant, because the bible knows everything about everything and makes all questioning of philosophy irrelevant. When I am trying to have a logical, moral discussion with my peers about the intricacies and causes of human morality, this is not the time to say “Magic Man Done It.” Perhaps if these people read literally anything else, they would understand that a 2000 year old, translated into corruption, and above all allegorical book does not contain the answers to life the universe and everything, and they could carry on an academic discussion.

There is a reason for the separation of church and state. In the middle ages, the only people who were literate/semi academic were monks, and therefore religion in schools made sense. However, we are not in the middle ages, and have kind of moved on from that kind of thinking. You would think that now that people can actually explain thunder, we wouldn't need jeebus absolutely everywhere in our lives, but alas, however many scientific advances we have made, or philosophical realizations we have come to, there will always be those thanking the magic man in the sky for creating our fucked-up little world.

And then there are the Teen Mormons, who will need to be dealt with in a column of their very own.

Kid Zoom is a high school sophomore in the wilds of Idaho. He is Doktor Zoom's spawn. We pay him in candy.