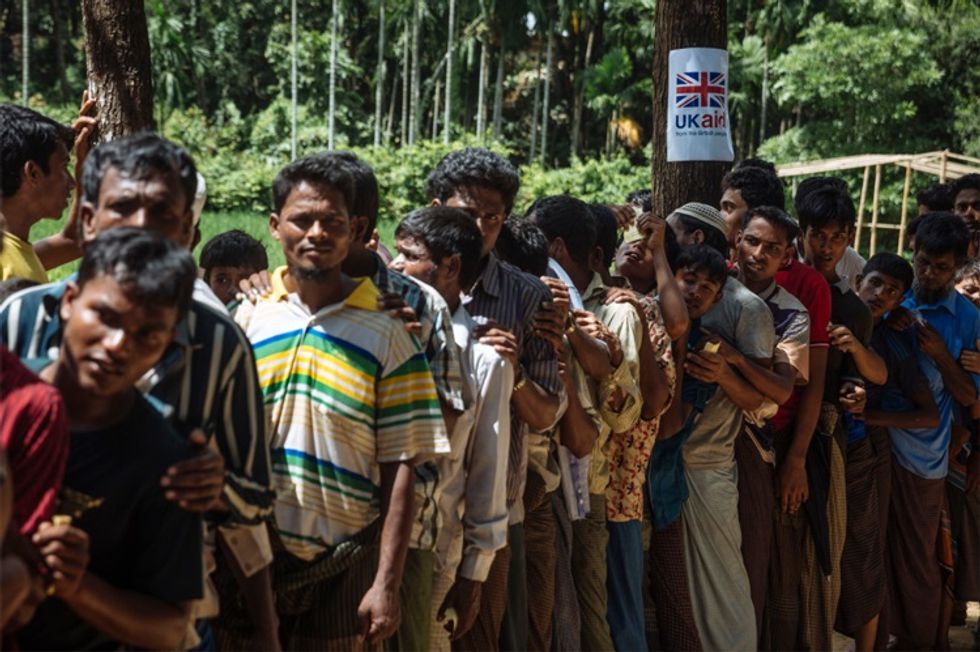 You might think you see Rohingya refugees in this photo, but there's no such thing.

During Donald Trump's recent tour of Asia, he found time to hang out with mass-murdering Philippines dictator Rodrigo Duterte, but at no point during his visit to the region did he ever mention Myanmar's ethnic cleansing of its Muslim Rohingya minority. In September, Trump's administration called on the UN to take "strong and swift action" to stop Myanmar's government from attacking the Rohingya and driving them out of the country, but it was VP Mike Pence who said it, not the "president." And yes, the administration has at least cut off military aid to Myanmar -- but again, that was announced only by the State Department, not Trump. Donald Trump has managed to not mention the Rohingya at all, possibly because there are no Rohingya in the NFL for him to yell at.

But Trump has nonetheless had his own special contribution to the refugee crisis: An officer in the security ministry for Rakhine State, where most Rohingya have historically lived, proclaimed to a New York Times reporter, "There is no such thing as Rohingya [...] It is fake news.”

Trump has so far not taken to Twitter to exult over his influence, no doubt because Fox News hasn't reported on Myanmar, ever. Rex Tillerson has condemned the treatment of the Rohingya as ethnic cleansing, but there's no evidence that the "president" even knows about the crisis; he's certainly been briefed on it, but either blanked it out, or is choosing not to say anything at all, because why would he care about Muslims, anyway?

But thanks to the repression by Myanmar's Buddhist majority, that official's insistence that there are no Rohingya is on the way to becoming a fact on the ground:

Since late August, more than 620,000 Rohingya Muslims, about two-thirds of the population that lived in Myanmar in 2016, have fled to Bangladesh, driven out by the military’s systematic campaign of massacre, rape and arson in Rakhine.

In a report released in October, the Office of the United Nations High Commissioner for Human Rights said that Myanmar’s security forces had worked to “effectively erase all signs of memorable landmarks in the geography of the Rohingya landscape and memory in such a way that a return to their lands would yield nothing but a desolate and unrecognizable terrain.”

NYT's Hannah Beech found plenty of evidence that the effort to not merely drive out the Rohingya, but to erase their existence, is working. In Sittwe, the capital of Rakhine State, Beech recalls a 2009 visit to the city, where she saw a thriving Rohingya population, with Muslim-owned shops, legal and medical offices, and lots of Rohingya attending the university. Not so much now -- since riots in 2012 that drove most Muslims out of the city, Rohingya have been forced into internment camps and essentially become Unpersons.

Across central Rakhine, about 120,000 Rohingya, even those who had citizenship, have been interned in camps, stripped of their livelihoods and prevented from accessing proper schools or health care.

They cannot leave the ghettos without official authorization. In July, a Rohingya man who was allowed out for a court appearance in Sittwe was lynched by an ethnic Rakhine mob.

The Jama mosque now stands disused and moldering, behind barbed wire. Its 89-year-old imam is interned.

“We have no rights as human beings,” he said, asking not to use his name because of safety concerns. “This is state-run ethnic cleansing and nothing else.”

In the Sittwe bazaar, where Beech had seen Muslim shopkeepers, the Rakhine merchants insisted that no, no Rohingya had ever had shops there, she must be mistaken. And the university, which formerly enrolled hundreds of Muslims, now has only 30 Muslim students -- and they're in a distance learning program, not on the Sittwe campus. The university's registrar said there are no religious restrictions, not at all, but "they just don't come" to classes anymore.

Might have something to do with the internment camps, or the third of a million Rohingya who've been forced to escape to refugee camps in Banglasdesh.

Now all the Rohingya need is for Chuck Grassley and Orrin Hatch to lecture them on taking some initiative and bettering themselves through hard work and thrift.

The whole piece, which offers a clear capsule history of the Rohingya in Burma, is worth reading, as are Jeffrey Gettleman's reports on Myanmar's murderous purges of Rohingya, and the uncertain future they face in Bangladeshi camps.

America is really good at feeling bad about genocides. We have a whole museum in Washington DC dedicated to the Holocaust, and in fact, the US Holocaust Memorial Museum has made awareness of the Rohingya one of its major focuses. In 2015, a USHMM report warned of impending genocide in Myanmar. We're there now.

And as we noted at the top, the US government is at least making some small noises about the ethnic cleansing. But not the "president," who sees no advantage in giving a shit about a million or so Muslims on the other side of the world. We don't do "human rights" these days. Much more political gain in making Americans afraid of Muslims, after all.

Maybe once the Rohingya have been wiped out, someone will remind Trump to tweet "Never Again." And to blame Hillary Clinton.

We always appreciate your donations at Wonkette. Today, if you want to help Rohingya refugees, we'd be OK with you sending some money to the International Rescue Committee and/or (for general aid worldwide) to Doctors without Borders. Thanks!